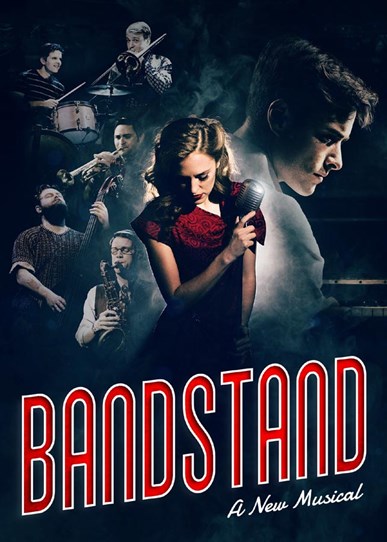 at the Jacobs Theatre

Directed and choreographed by Tony Award winner Andy Blankenbuehler (Hamilton, In the Heights), Bandstand features music by Richard Oberacker and a book and lyrics by Robert Taylor and Richard Oberacker.

Andy Blankenbuehler said “I was thrilled to have the chance to premiere Bandstand out at The Paper Mill Playhouse, where I’ve had so many great mile markers in my career. Our time there was so important for the development of this very exciting and brand new musical. We were thrilled with the reception we received, but we were even more excited to roll up our sleeves and continue working on the show. After months of digging deeper with the material, the entire Bandstand team is ready to put the show up on the Broadway boards. As a director, I’m so lucky to be involved with a show that is so rich in emotion and heart. As a choreographer, I’m over the moon to be dancing to a score that sizzles like nothing else on Broadway.”

Set in the smoke filled, swing fueled night clubs of 1945, Bandstand brings the against-all-odds story of singer/songwriter Donny Novitski (Cott) and his band of mismatched fellow WWII veterans to the stage.

When a national radio contest to find America’s next big swing band offers a chance at instant fame and Hollywood fortune, Donny must whip his wise-cracking gang of jazzers into fighting shape. Teaming up with the beautiful young war widow Julia (Osnes) as their singer, they struggle to confront the lingering effects and secrets of the battlefield that threaten to tear them apart.

Playing for every voiceless underdog in a world that has left them behind, they risk everything in the final live broadcast to redefine the meaning of victory. With an explosive original score and choreography inspired by the high energy swing rhythms of the era, Bandstand is a truly American story of love, loss, triumph and the everyday men and women whose personal bravery defined a nation.

ANDY BLANKENBUEHLER (Director, Choreographer) is proud to have won the 2016 Tony Award for his choreography in the hit musical Hamilton. Other Broadway credits include In The Heights (Tony, Lortel, Calloway, Outer Critics and Drama Desk Award for Outstanding Choreography), the new musical Bring It On (Tony nomination for Best Choreography, Drama Desk nomination for Best Director), 9 To 5 (Tony nomination), The People In The Picture, The Apple Tree, Annie and the recent revival of CATS. Other theatrical work includes the world premiere of the new musical The Bandstand at The Paper Mill Playhouse, FLY (Dallas Theatre Center), The Wiz (City Center Encores), Desperately Seeking Susan (West End), A Little Princess (Andrew Lippa) and the national tour of Joseph And The Amazing Technicolor Dreamcoat. Upcoming projects include the new musical Only Gold with British singer/songwriter Kate Nash. Most recently, Mr. Blankenbuehler has just finished choreographing the Lionsgate/ABC remake of Dirty Dancing, to be aired this year. He has staged concert work for both Elton John and Bette Midler and he conceived, directed and choreographed the hit Caesars Palace production Nights On Broadway. On television, his work has been seen on “America’s Got Talent,” “So You Think You Can Dance,” “The Sopranos,” on MTV, and “Sesame Street” featuring Janelle Monae as well as many national commercials. As a performer, he has danced on Broadway in Fosse, Contact, Man of La Mancha, Saturday Night Fever, Steel Pier, Big and Guys and Dolls. He has toured the US and internationally with West Side Story and Andrew Lloyd Webber’s Music of the Night. He teaches across the country with the New York City Dance Alliance.


ROBERT TAYLOR’s (Book, Lyrics) musicals include Ace (NAMT, Cincinnati Playhouse, Repertory Theatre of St. Louis, Old Globe Theatre, Signature Theatre), Journey to the West (NYMF), The Parenting Project (Cincinnati Fringe Festival, Ensemble Theatre) and The Sandman (NAMT, Fredericia Theater of Denmark). He has taught foreign languages and ornithology in New York, English and music in China, served as music critic for the Albany Times Union, founded and directed several nonprofits and worked as a freelance musician and writer in Manhattan and as a translator in Europe and Asia.


LAURA OSNES (Julia Trojan) was last seen on Broadway as the title role in Rodgers + Hammerstein’s Cinderella (Drama Desk Award; Tony, Outer Critics Circle, Drama League and Astaire Award nominations). She also starred in Bonnie and Clyde (Tony Award nomination), creating the role at Asolo Repertory Theatre and La Jolla Playhouse (San Diego Theatre Critics Circle Award). She appeared as Hope Harcourt in the Tony Award winning revival of Anything Goes (Drama Desk, Outer Critics Circle, and Astaire Award nominations) and Nellie Forbush in Lincoln Center Theater’s production of South Pacific, and made her Broadway debut as Sandy in the most recent revival of Grease. Other New York/regional credits include the Broadway-bound musical The Bandstand at Paper Mill Playhouse; The Threepenny Opera (Drama Desk Award nomination) at Atlantic Theater Company; City Center Encores! productions of The Band Wagon, Randy Newman's Faust, and Pipe Dream; The Sound of Music in concert at Carnegie Hall; Carousel opposite Steven Pasquale at the Lyric Opera of Chicago, and Broadway: Three Generations at the Kennedy Center. On television, she has been seen on the CBS series “Elementary,” in the HBO pilot “The Miraculous Year,” Sondheim: The Birthday Concert at Avery Fisher Hall, HBO's documentary Six By Sondheim and “The Kennedy Center Honors” salutes to Barbara Cook (2011) and Dustin Hoffman (2012). Her many concerts and cabarets include performing with Michael Feinstein, the New York Philharmonic, The New York Pops, The Mormon Tabernacle Choir, The Boston Pops, and the Pasadena Pops, as well as appearing in such venues as Carnegie Hall, The Café Carlyle, 54 Below, Lincoln Center, NJPAC, The Smith Center in Las Vegas, and MN Orchestra Hall. In addition to being heard on several cast recordings, Laura has two solo albums, Dream A Little Dream: Live at The Café Carlyle and If I Tell You: The Songs of Maury Yeston.

COREY COTT (Donny Novitski). Since graduation from Carnegie Mellon School of Drama, Corey Cott has quickly established himself as a captivating young actor, equally at home on both stage and screen. He made his Broadway debut starring for two years as Jack Kelly in Disney’s hit musical Newsies, and went on to star opposite Vanessa Hudgens in the Broadway revival of Gigi. On television, Corey can be seen in the upcoming Amazon series “Z” as well as “My Mother and Other Strangers,” a miniseries for BBC. Other credits include the pilot “The Interestings” (Amazon), “Madam Secretary” (CBS) and “Public Morals” (TNT). He starred opposite Laura Osnes in the world premiere of Bandstand at Paper Mill Playhouse. A native of Chagrin Falls, Ohio, Corey made his solo concert debut at The Kennedy Center’s ASCAP Centennial Celebration, and recently headlined at Elsie Fest in New York City. Twitter/Insta: @NapOnACott.