KING KONG at the Broadway Theatre 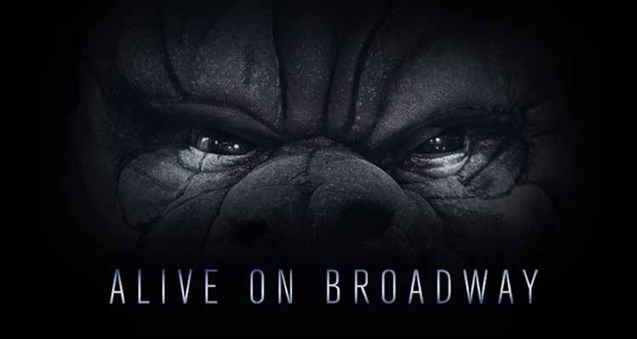 At the Broadway Theatre

Producers Global Creatures (CEO Carmen Pavlovic) and Roy Furman are pleased to announce that King Kong, will arrive on Broadway in the fall of 2018 at the Shubert Organization’s Broadway Theatre.

King Kong’s first preview, press opening, and on-sale dates will be announced in the coming months. King Kong will play the Broadway Theatre following the limited engagement of Miss Saigon which as previously announced will begin its North American tour in September 2018.

King Kong is written by Jack Thorne, who received the 2017 Olivier Award and the Evening Standard Award for Best Play for Harry Potter and the Cursed Child, and wrote the critically acclaimed play Let the Right One In.

Pioneering creature designer Sonny Tilders developed Kong for the show, bringing together the worlds of animatronics and puppetry that has never been seen on stage before. Tilders was honored by the Helpmann Awards, Australia’s highest theatrical honor, for Outstanding Theatrical Achievement.

Carmen Pavlovic said, “I’m thrilled that King Kong will be coming to Broadway next season led by Drew McOnie and Jack Thorne, who will bring a new dimension to the telling of Kong’s story. Drew’s physical world will allow Kong to live in ways we never thought possible, propelled by Jack’s text and the score and songs written by Marius de Vries and Eddie Perfect.”

Producer Roy Furman said, “King Kong is a quintessential New York story and I’m proud to be involved in this historic production. Our team is creating a theatrical experience that we hope will astound audiences, while delighting them with its heartfelt storytelling."

Based on the novel of the original 1933 screenplay, the stage show of King Kong is a contemporary take on the classic tale of beauty and the beast.

King Kong is authorized by the Merian C. Cooper Estate.

Casting, additional members of the creative team, and ticketing details for King Kong will be announced at a later date.

JACK THORNE (Text) writes for theatre, film, television, and radio. His theatre credits include Harry Potter and the Cursed Child, Hope, and Let The Right One In, all directed by John Tiffany; Junkyard, a Headlong, Rose Theatre Kingston, Bristol Old Vic and Theatr Clwyd co-production; The Solid Life of Sugarwater for Graeae Theatre Company and the National Theatre; Bunny for the Edinburgh Fringe Festival; Stacy for the Trafalgar Studios; 2nd May 1997 and When You Cure Me for the Bush Theatre. His adaptations include Woyzeck, Old Vic; The Physicists for the Donmar Warehouse and Stuart: A Life Backwards for Hightide. On film his credits include Wonder, War Book, A Long Way Down, and The Scouting Book for Boys. For television his credits include “National Treasure” (2017 BAFTA winner), “The Last Panthers,” “Don’t Take My Baby,” “This Is England,” “The Fades,” “Glue,” and “Cast-Offs.” He won 2016 BAFTAs for Best Mini-Series (“This Is England ’90”) and Best Single Drama (“Don’t Take My Baby”), and in 2012 won Best Series (“The Fades”) and Best Serial (“This Is England ’88”).

MARIUS DE VRIES (Composer) has won two BAFTAs, an Ivor Novello award, and four Grammy nominations.  He is best known recently for his music direction and production on the multi-award-winning musical La La Land, which won 2017 Academy and Golden Globe Awards. Beginning his career playing keyboards for The Blow Monkeys, he has worked with artists such as Madonna, Bjork, David Bowie, Rufus Wainwright, Chrissie Hynde, Neil Finn, Annie Lennox, Bebel Gilberto, David Gray, P.J. Harvey, U2, Massive Attack, Elbow, Perry Farrell, Josh Groban, and many others. In the film and theatre world, he has collaborated with Baz Luhrmann, George Lucas, Andrew Lloyd Webber, A.R. Rahman, Zack Snyder, Daniel Kramer, and Stephan Elliott.  De Vries' long collaborative relationship with Nellee Hooper was responsible for landmark recordings with Massive Attack, Björk, Madonna, The Sneaker Pimps, Tina Turner, and U2, and ultimately the soundtrack and score for Baz Luhrmann's Romeo + Juliet and the groundbreaking Moulin Rouge.  Marius composed the score for Stephan Elliot’s The Eye of the Beholder and Easy Virtue. In musical theatre, Marius has worked with Andrew Lloyd Webber on Bombay Dreams and the sequel to The Phantom of the Opera: Love Never Dies. He also produced the cast album for Jerry Springer The Opera. In 2010, Marius contributed score and song productions to Kick-Ass and Sucker Punch, as well as co-producing an LP with Robbie Robertson. Another collaboration with Rufus Wainwright arrived in early 2016, an album of musical settings of nine Shakespearean sonnets, released to coincide with the 400th anniversary of Shakespeare's death, entitled Take all My Loves. Marius worked on George Lucas' animated fairytale musical, Strange Magic. He is now attached to Teen Spirit, starring Elle Fanning, directed by Max Minghella, and earlier this year he signed an agreement with the English National Opera to develop new and adventurous opera-related projects. He is also completing an album with The Pretenders’ Chrissie Hynde.

EDDIE PERFECT (Songwriter) is one of Australia’s most diverse, respected and prolific writer/composer/performers, having made his mark in the fields of comedy, music theatre composition, playwriting, screenwriting, classical music, jazz and acting for stage and screen.  Perhaps best known for his portrayal of Mick Holland on Ten’s Offspring, a judge on Australia's Got Talent, and as the new host of Play School, Eddie has won multiple awards for his work both as a performer and a writer. His stage credits include Baz Lurhmann and Global Creatures’ Strictly Ballroom, Malthouse Theatre Company (Babes InThe Wood, Drink Pepsi Bitch, The Big Con), Shane Warne The Musical, Keating! The Musical, Songs From The Middle in collaboration with ANAM, Iain Grandage and the UK’s Brodsky Quartet, Opera Victoria’s The Threepenny Opera and Opera Australia’s South Pacific.  His solo music comedy shows (Angry Eddie, Drink Pepsi Bitch, Misanthropology) have received Helpmann and Green Room Awards, touring Australia, New Zealand, Edinburgh and London. His first play The Beast (for Melbourne Theatre Company) was a commercial and critical hit, before touring Australia with Ambassador Theatre Group in 2016. Eddie is currently writing a new play (Vivid White) for Melbourne Theatre Company, a musical adaptation of Beetlejuice for Warner Bros. Theatricals in New York, and is co-Artistic Director of Adelaide Cabaret Festival.