KIMBERLY AKIMBO To Transfer to Broadway in Fall 2022 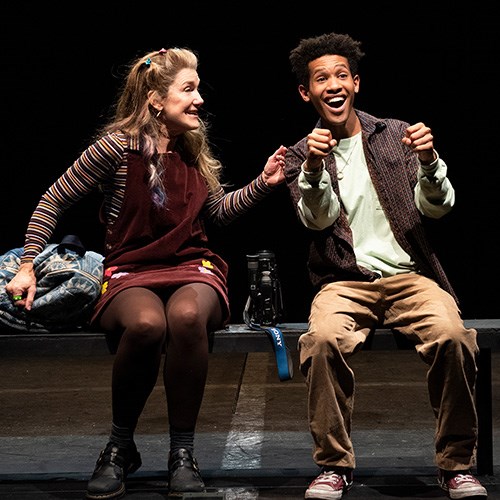 The Most Acclaimed New Musical of the Year

Is Coming to Broadway

To Transfer to Broadway in Fall 2022

A new musical with book and lyrics by Pulitzer Prize-winner David Lindsay-Abaire, music by Tony Award-winner Jeanine Tesori, based on the critically-acclaimed play of the same name by David Lindsay-Abaire, choreographed by Danny Mefford, and directed by Jessica Stone, Kimberly Akimbo had its world premiere at the Atlantic Theater Company, where it opened to rave reviews this past fall.

Kim is a bright and funny Jersey teen, who happens to look like a 72-year-old lady. And yet her aging disease may be the least of her problems. Forced to maneuver family secrets, borderline personalities, and possible felony charges, Kim is determined to find happiness in a world where not even time is on her side.

The complete creative team, ticketing, and on-sale information will be announced in the coming weeks.

ABOUT THE CAST AND CREATIVE TEAM

JUSTIN COOLEY (Seth) will be making his Broadway debut with this production, after originating the role of Seth in the off-Broadway world premiere. A musical theatre student at Texas Christian University from Kansas City, he was a part of the 2021 Jimmy Awards and was featured as a finalist. He has starred in several shows around the Kansas City Metro area and his high school Olathe East, recent credits include Dmitry in Anastasia, Dennis in All Shook Up, and Terk in Tarzan.


STEVEN BOYER (Buddy) recurs on the second season of the HBO Max series, “Love Life.” Steven starred on the NBC comedy “Trial and Error” and can be seen in the upcoming feature film, Borderlands. Boyer was nominated for a Tony Award for the Broadway run of Hand to God¸ as well as an OBIE and a Lucille Lortel Award for his work in the show’s off-Broadway production. Named, “one of the Future Legends of the NY Theatre,” by Time Out NY, Steven recently starred in Assassins which was a part of the Encores Off Center series, as well as MTC’s The Explorer’s Club and Second Stage’s production of Modern Terrorism. He also played the title role of Trevor in Nick Jones’ darkly funny Trevor, performed with Lesser America. In addition to his work in the theater, Boyer has appeared in Steven Spielberg’s Bridge of Spies and in Martin Scorsese’s film The Wolf of Wall Street as well as Hustlers starring Jennifer Lopez and Constance Wu. Boyer recently recurred on the NBC series “Chicago Fire” and has appeared in such TV series as “Blacklist,” “Orange is the New Black,” “The Good Wife,” “The Crazy Ones,” “Louie,” “Mom,” “Person of Interest,” “Law & Order,” and “Ed.” He starred in and produced “The Share,” an independent web sitcom pilot from Emily Chadick Weiss. He is a graduate of The Juilliard School and is also a member of Ensemble Studio Theatre.


OLIVIA ELEASE HARDY (Delia): Prior to the off-Broadway production of Kimberly Akimbo, Olivia toured with the First national Tour of Summer: The Donna Summer Musical as “Duckling Donna.” Kimberly Akimbo is Olivia’s second professional show and first time originating a role. Originally from Southern New Jersey, Olivia attended the University of Michigan to earn her BFA in Musical Theatre. This production will be her Broadway debut.

FERNELL HOGAN (Martin) is a Houston native. Previous credits include: The Prom (Broadway) and Mean Girls (First National Tour). He is a graduate of Houston’s High School for the Performing and Visual Arts. @fernellhogan.


MICHAEL ISKANDER (Aaron) was born in Egypt and came to the United States when he was nine. He started learning English after coming to the U.S. Michael enjoys playing piano, guitar, and writes/produces songs in his free time. Michael was honored to win the regional awards program Spirit of the M.A.C.Y. Awards in Orange County for his portrayal of Usnavi in In The Heights, as well as the Special Recognition Award at the Jimmy Awards. Kimberly Akimbo will be Michael’s Broadway debut.


NINA WHITE (Teresa) will be making her Broadway debut in Kimberly Akimbo. Prior credits include Sister Mary Robert in Sister Act (Music Theatre Wichita), Kristina in 2AZ (The Purple Rose Theatre Company), and Mother Teresa in The Last Days of Judas Iscariot (Univ. Of Michigan). Nina is a proud graduate of the University of Michigan.

DAVID LINDSAY-ABAIRE (Book, Lyrics, Original Play) is a Pulitzer Prize-winning playwright, screenwriter, lyricist, and librettist. His play Good People premiered on Broadway and was awarded the New York Drama Critics Circle Award for Best Play, The Horton Foote Prize, The Edgerton Foundation New American Play Award, and two Tony nominations. His previous play Rabbit Hole received the Pulitzer Prize for Drama, five Tony nominations, and the Spirit of America Award. David also wrote the book and lyrics for Shrek the Musical (Jeanine Tesori, composer), which was nominated for eight Tonys, four Oliviers, a Grammy, and earned David the Kleban Prize as America’s most promising musical theatre lyricist. David’s other plays include Ripcord, Fuddy Meers, Kimberly Akimbo, Wonder of the World, and A Devil Inside, among others. In addition to his work in theater, David's screen credits include his film adaptation of Rabbit Hole (starring Nicole Kidman, Oscar nomination), Dreamworks’ Rise of the Guardians, and The Family Fang, among others. He is also, along with Tanya Barfield, Co-Director of the Playwriting Program at the Juilliard School.

JEANINE TESORI (Music) has written a diverse catalog for Broadway, opera, film, and television.  Along with Missy Mazzoli, Ms. Tesori is one of the first female composers commissioned by the Metropolitan Opera. Her musicals include: Fun Home (Tony Award, Pulitzer finalist); Soft Power (Pulitzer finalist); Caroline, or Change (Olivier Award); Violet; Shrek; Thoroughly Modern Millie; Twelfth Night. Her operas include: Blue (Libretto, Tazewell Thompson); A Blizzard on Marblehead Neck (Tony Kushner); The Lion, The Unicorn and Me (J.D. McClatchy); and the upcoming Grounded (George Brant). In addition to her work as a composer, Tesori is the founding artistic director of New York City Center's Encores! Off Center Series, a lecturer at Yale University, and most recently the Supervising Vocal Producer for Steven Spielberg's West Side Story.

JESSICA STONE (Director) worked as an actress on and Off-Broadway, in television, and in film before transitioning to directing. Her directing career began in earnest with her all-male 2010 production of A Funny Thing Happened on the Way to the Forum for the Williamstown Theatre Festival. She has since been directing all over the country at such theaters as The Old Globe, A.C.T, Shakespeare Theatre Company, Huntington Theatre Company, Two River Theatre Company, and the Williamstown Theatre Festival, among others. Productions include As You Like It, Kate Hamill’s Vanity Fair, Barefoot in the Park, Dancing at Lughnasa, Bad Dates, Ken Ludwig’s Robin Hood! (world premiere), Ripcord, Bad Jews, Arms and the Man, Vanya and Sonia and Masha and Spike, Charlotte’s Web, June Moon, Last of the Red Hot Lovers, The 25th Annual Putnam County Spelling Bee, and Absurd Person Singular. As a performer her Broadway credits include Anything Goes, Butley, The Odd Couple, The Smell of the Kill, Design for Living, How to Succeed in Business Without Really Trying, and Grease.