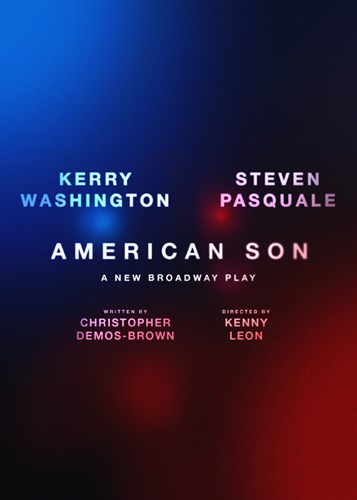 Return to Broadway to Star in

A New Play by CHRISTOPHER DEMOS-BROWN

AMERICAN SON will begin performances on Saturday, October 6, 2018 with an official opening night set for Sunday, November 4, 2018.  American Son will play a limited engagement at the Booth Theatre on Broadway (222 West 45th Street).

Washington returns to Broadway in this new drama after making her debut in David Mamet’s Race (2009) and starring, for seven acclaimed seasons, on the hit television ABC series “Scandal.”  Pasquale returns to Broadway following his starring roles in Junk (LCT) and Bridges of Madison County.  On television Pasquale is known for his performances in “The People Vs. OJ Simpson: American Crime Story” and seven seasons on “Rescue Me.”

DO YOU KNOW WHERE YOUR CHILDREN ARE?  A Florida police station in the middle of the night; a mother searching for her missing teenage son.  AMERICAN SON is a gripping tale of two parents caught in our national divide, with their worst fears hanging in the balance.

“Christopher Demos-Brown has written a play that dives deep into the big questions of who we are as a nation, by exploring the intimate relationships within a family caught at the crossroads of love, loss, identity and community,” says star Kerry Washington.  “After reading the script I was immediately enthralled by the world of the play and the gripping circumstances that these characters are facing.  I am excited to step into the ring with Kenny & Steve to tell this story on Broadway.”

American Son was awarded the 2016 Laurents/Hatcher Award for Best New Play by an Emerging Playwright.

KERRY WASHINGTON (Kendra Ellis-Connor).  Kerry Washington is a versatile and fearless performer who continues to astound with the depth of her talent. A native of the Bronx, New York, Washington has received high acclaim for her work in film, television, and theater. Her portrayal of crisis-manager Olivia Pope on the hit Shonda Rhimes show “Scandal,” which aired its series finale in April 2018, has earned her numerous accolades including Golden Globe, Emmy and SAG Best Actress nominations as well as an NAACP Image Award for Best Actress.  In 2016, Washington launched her production company Simpson Street, who’s first project, HBO’s “Confirmation”, earned Emmy, Golden Globe and Screen Actors Guild Awards nominations for its portrayal of Clarence Thomas’ Supreme Court nomination hearings and the sexual accusations against him by Anita Hill (portrayed by Washington). Film credits include Save the Last Dance, Lift (for which she received an Independent Spirit nomination), Mr. & Mrs. Smith, I Think I Love My Wife, She Hate Me, Miracle at St. Anna, Lakeview Terrace, The Details, A Thousand Words, Mother And Child, Django, Peeples and Cars 3. Washington is active in many social and political causes. She served on the President’s Committee on the Arts and the Humanities during the Obama Administrations. In 2012, she commanded the national stage on the final night of the Democratic National Convention in a moving address that urged Democrats to get out the vote. In 2013 Washington was honored with the NAACP President’s Award, which recognized her special achievements in furthering the cause of civil rights and public service. In 2014, Time magazine included Washington on its annual Time 100 list of the Most Influential People in the World. Washington received the GLAAD Media Vanguard Award in 2015 and the ACLU Bill of Rights Award in 2016. Kerry is a brand ambassador for Movado as well as both a brand ambassador and creative consultant for Neutrogena.

STEVEN PASQUALE (Scott Connor). Steven Pasquale most recently starred on Broadway in Lincoln Center’s production of Junk, written by Ayad Akhtar and directed by Doug Hughes. Previously he starred in Stephen Sondheim’s Assassins at City Center’s Encores! series, in Alex Timber’s production of The Robber Bridegroom at the Roundabout Theatre, and opposite Kelli O’Hara in the Broadway musical adaptation of The Bridges Of Madison County directed by Bartlett Sher, for which he received Drama Desk and Drama League nominations for his performance.  Other stage credits include “Billy Bigelow” in Chicago Lyric Opera’s acclaimed production of Carousel directed by Rob Ashford, the musical adaptation of Far From Heaven at Playwrights Horizons directed by Michael Greif, and Tony Kushner's The Intelligent Homosexual’s Guide… at the Public Theater also directed by Michael Greif.  Steven is widely known to television audiences as firefighter Sean Garrity in the hit TV series “Rescue Me,” which aired on FX for 7 seasons. Other series include “Do No Harm”, “Up All Night”, “Coma”, “Six Feet Under”, “Marry Me”, “Bloodline”, “Billions”, “The Good Wife” and as “Mark Fuhrman” in Ryan Murphy’s television phenomenon “American Crime Story: The People Vs. OJ Simpson” for FX. He can currently be seen as a recurring guest star in the HBO series “Divorce”. On the big screen, Steven appeared as “Dallas” in Alien Vs. Predator: Requiem; in Aurora Borealis, which premiered at the 2005 Tribeca Film Festival; and in Jonathan Segal's feature The Last Run.

EUGENE LEE (Lieutenant John Stokes).  In 1972, while in college, Eugene Lee acted in a command performance of A Raisin in the Sun for President Lyndon B. Johnson at his Texas ranch.  Forty-five plus years later he is still performing in film, television and theater, and he has also become an acclaimed writer.  He went on to appear in television shows, including:   "The Women of Brewster Place" with Oprah Winfrey, "Dallas," "Good Times," "The White Shadow," and "The District," and the title character in Wolf, an award winning independent film. He most recently appeared in the independent film Thunder Road, winner of the best narrative feature award at the SXSW Film Festival 2018.  Eugene has appeared on stage across the US and the world. He has worked and traveled with New York’s renowned Negro Theatre Ensemble, performing in the Pulitzer Prize winning A Soldier's Play and numerous other works. He is considered a "Wilsonian Warrior" for his many appearances in the works of August Wilson, including the Broadway production of Gem of the Ocean. He performed in five of Wilson's 10 plays at the Kennedy Center in Washington, D.C.  and in the taped PBS recordings of all ten plays in the Century Cycle as well as in August Wilson’s final autobiographical one-man piece, How I Learned What I Learned.  His stage credits include appearances with WPA Theatre and the Public Theatre in NYC, Crossroads Theatre Company in New Jersey, Los Angeles’ Mark Taper Forum, Chicago’s Goodman Theatre, Boston’s Huntington Theatre, Alliance and True Colors Theatre Company in Atlanta, Arena Stage and Kennedy Center in D.C., Baltimore’s Center Stage, Pittsburgh Public Theatre, Pittsburgh Playwrights Theatre, and Seattle Repertory Theatre.  His writing credits include an episode of "Homicide: Life on the Streets," (“Every Mother’s Son”), "Walker, Texas Ranger," "Michael Hayes," "The Journey of Allen Strange", "The Turks" and the TV movie “Port Chicago”. Lee is Artist in Residence and Artistic Director of the Black and Latino Playwright's Conference at Texas State University. www.eugeneleeonline.com

CHRISTOPHER DEMOS-BROWN (Playwright) makes his Broadway debut with American Son.  Honors for his plays include the Laurents/Hatcher Award, multiple Carbonell Awards and an American Theatre Critics’ Association/Steinberg Award Citation. He and his wife, Stephanie, are cofounders of Zoetic Stage in Miami, where he also serves as the Literary Manager.  He is a graduate of Dartmouth College and holds graduate degrees from the Fletcher School of Law and Diplomacy and the University of Geneva.  This play is dedicated to his daughters, Kate and Jilly.

KENNY LEON (Director) is a Tony Award-winning Broadway and film director. His Broadway credits include the revival of Children of a Lesser God, the Tupac musical Holler If You Hear Me, A Raisin in the Sun starring Denzel Washington (Tony Award for Best Direction of a Play and Best Revival of a Play), The Mountaintop starring Samuel L. Jackson and Angela Bassett, Stick Fly produced by Alicia Keys, August Wilson’s Fences (which garnered ten Tony nominations and won three Tony Awards, including Best Revival of a Play), Gem of the Ocean and Radio Golf, as well as A Raisin in the Sun starring Sean “P. Diddy” Combs. Leon’s recent television work includes “Hairspray Live!”, and “The Wiz Live!” on NBC. Awards include the 2106 “Mr. Abbott” Award, and the 2010 Julia Hansen Award for Excellence in Directing by the Drama League of New York.  Prior to co-founding True Colors Theatre Company, he served 11 years as Artistic Director of The Alliance Theatre, where he produced the premieres of Disney's Elaborate Lives: The Legend of Aida, Pearl Cleage's Blues for an Alabama Sky and Alfred Uhry's The Last Night of Ballyhoo. Other directorial credits include Alicia Keys World Tour, Toni Morrison's opera Margaret Garner, the world premiere of Flashdance The Musical, and the complete August Wilson Century Cycle at the Kennedy Center.  Leon is a sought after motivational speaker that has done acting and theatre workshops at universities and corporate offices around the country, South Africa and Ireland.  He has directed in the UK, and extensively throughout the US, including Chicago's Goodman Theatre, Boston's Huntington Theatre, Baltimore's Center Stage, Los Angeles' Center Theatre Group and New York's Public Theatre.  Leon is a graduate of Clark Atlanta and is an honorary Ph.D. recipient of Clark Atlanta and Roosevelt Universities and has served as the Denzel Washington Chair at Fordham University.

SIMPSON STREET, LLC (Producer).  Simpson Street was established in 2016.  Its first project, HBO’s “Confirmation”, earned Emmy, Globe and SAG nominations.  The company is currently in development on Goldie Vance, a family film franchise for Fox, directed by Rashida Jones, the limited series “Little Fires Everywhere” for Hulu, which is a co-production with Reese Witherspoon and her Hello Sunshine production company, as well as the films City of Saints & Thieves with Will Packer Productions, The Mothers with Warner Bros, The Perfect Mother with Pascal Pictures, and 24-7 with UnbeliEVAble Entertainment and Universal Pictures.  They are also co-producing, along with The Jackal Group, the multi-camera comedy pilot “Man of the House” starring Alyson Hannigan and Leslie Bibb for ABC.  In June 2018, the ten-episode drama series “Five Points”, which Simpson Street co-produced with Indigenous Studios, will premiere on Facebook Watch.

REBECCA GOLD (Producer).   Rebecca Gold is proud to bring this new play to Broadway—a Broadway debut for the playwright!  Rebecca's intent is to produce pieces like this one, that provoke thought and stimulate conversation.   She has received numerous awards and nominations on Broadway (The Gershwins' Porgy and Bess, All the Way, Lady Day at Emerson's Bar and Grill among them) -- and off-Broadway (Sleep No More at The McKittrick Hotel and Sweeney Todd at the Barrow Street Theater).  Committed to bringing both extraordinary new work and revivals of the American canon to audiences, Rebecca is extensively involved with and supportive of not-for-profit theater, including the American Repertory Theater at Harvard, and the Fisher Center at Bard College.

WILL TRICE (Producer) has, alongside Jeffrey Richards, brought over 20 productions to Broadway and the West End.  He has received Tony Awards for Porgy and Bess, Who’s Afraid of Virginia Woolf?, and All the Way; as well as nominations for The Best Man, The Glass Menagerie, You Can’t Take It With You, Wolf Hall, and Fiddler on the Roof. Originally from Little Rock, AR, he spent his early career with management consulting firm McKinsey & Co., The Metropolitan Opera, and alternative asset managers D.E. Shaw & Co. He is a graduate of Southern Methodist and Northwestern Universities.