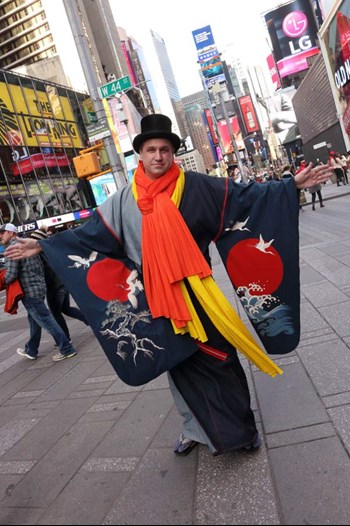 WILL BEGIN ITS OFFICIAL RUN OFF-BROADWAY

“A delight, Katsura Sunshine’s Rakugo is funny and exciting. If you’re looking for a good way to laugh and forget your troubles this is the show for you!”
Times Square Chronicle

“Just the right way to make us laugh. Worth a visit.”
Theater Scene.com

“Funny and delightfully intimate with a feeling of improvisation that makes it easy to love.”
Theater Pizzazz

Recently the emcee of the G20 in Osaka, Katsura Sunshine’s Rakugo comes to Times Square. Called the King of Kimono Comedy, Rakugo is the 400-year-old Japanese traditional art of comic storytelling, currently there are only 800 Rakugo Masters. Hailing from Canada, Sushine is the only Western Rakugo Master in the world and star of NHK Worldwide, he is hilarious, charming, universally funny and yet so very Japanese. Sunshine is the perfect performer to bridge the gap between the East and the West, in a hilarious style. Critics have raved “A delight, Katsura Sunshine’s Rakugo is funny and exciting. If you’re looking for a good way to laugh and forget your troubles this is the show for you!” and “Funny and delightfully intimate with a feeling of improvisation that makes it easy to love.”

With a minimal set, Rakugo features a lone storyteller dressed in kimono, kneeling on a cushion, using only a fan and a hand towel for props, entertains the audience with a comic monologue followed by a traditional story.

In order to become a recognized professional Rakugo storyteller, one must apprentice to a Rakugo Master, from whom one receives a stage name. The apprenticeship lasts for three to four years, and is very strict. Depending on the master, the apprentice may not drink, smoke, or go on dates, and is subject to a strict curfew during the apprenticeship period. The apprentice cleans the master’s house, does laundry, cooking, preparing and folding kimonos, and other chores, and learns the art of storytelling by watching the master perform and imitating. Throughout one’s career, one is only allowed to perform a given story once permission to do that story has been granted by a master storyteller.

Katsura Sunhine’s Rakugo has a set design by Mikiko Suzuki MacAdam, lighting design by Ayumu Poe Saegusa, with sound design by Hide J Nakajo and is presented by Steven Honigman and Joe Trentacosta in association with Yumi Shinozaki and The Yoshimoto Creative Agency of Japan with General Management by LDK Productions.

KATSURA SUNSHINE was born in Toronto, Ontario, to parents of Slovenian origin. He studied Classics at the University of Toronto, specializing in Ancient Greek Theatre. In September, 1995, his version of Aristophanes’ “Clouds” opened at the Poor Alex Theatre in Toronto, and ran for 15 months before embarking on a tour of central and eastern Canada. ​ Sunshine went to Japan in 1999 to pursue studies in Japanese theatre. ​ On September 1st , 2008, he was accepted as an apprentice to the great Rakugo storytelling Master, Katsura Bunshi VI (then named Katsura Sanshi), and received from his Master the Rakugo name Katsura Sunshine. ​ Sunshine is the first ever Western Rakugo storyteller in the history of the “Kamigata” Rakugo tradition, based in Osaka, and only the second ever in the history of Japan. ​ He has performed in the United States, Canada, United Kingdom, France, Australia, Singapore, Sri Lanka, Hong Kong, Thailand, Nepal, Ghana, Senegal, Gabon, South Africa, as well as throughout Japan. He had both his West End debut at the Leicester Square Theatre and his off-Broadway debut at the SoHo Playhouse for three weeks each in 2017. ​ In 2019 Sunshine was part of the successful bid of the city of Osaka for the 2025 World Fair, for which he travelled to Paris to present Japanese culture, as well as featuring in a video which was played on the final voting day. He received praise from Prime Minister Shinzo Abe for this work, particularly for the video presentation. ​ Also in 2019, Sunshine was chosen to be Master of Ceremonies at the opening reception of the G-20 Summit in Osaka. ​ Sunshine currently divides his time between New York and Tokyo.