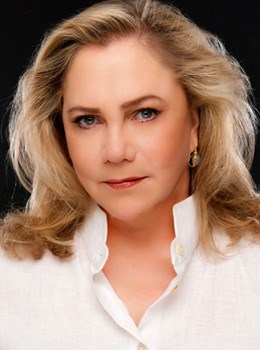 22Q Entertainment (Robert Levinstein & Alan Wager), has announced that Academy Award Nominee & Golden Globe Winner Kathleen Turner and Grammy Award Nominee Deborah Cox have signed on to join the cast of the world premiere Off Broadway production WOULD YOU STILL LOVE ME IF… a love story that tackles the issue of transgender identity. Nona Gerard will direct the production that begins previews on Saturday, September 26th at New World Stages and will have its official opening on Saturday, October 10th.

WOULD YOU STILL LOVE ME IF… is the story of Danya and Addison, caring intelligent young women with a promising future and a baby on the way, but there’s a lifelong secret that threatens to destroy all they hold dear – prompting the profound question…why do we love who we love?

In addition to Ms. Turner and Ms. Cox, the cast of WOULD YOU STILL LOVE ME IF… will include Rebecca Brooksher and Sofia Jean Gomez.

Nona Gerard (Director) earned a Bachelors degree in Theatre Arts at Point Park University and a Masters degree in Acting at the University of Pittsburgh. Throughout a sixteenyear tenure as an Associate Professor of Theatre she directed numerous productions for Educational Theatre including: Beyond Therapy, Sexual Perversity in Chicago, Antigone, Vanities, Line, Extremities, Lonestar and Blue Window. For more than twenty years Ms. Gerard instructed students in acting, audition and directing classes at Point Park, Penn State and Carnegie Mellon Universities. Ventures in regional theatre, a personal favorite, included: The Crucible, Measure for Measure, As You Like It, The Importance of Being Earnest and Zoo Story. Director of Drama Therapy for the Pittsburgh Playback Theatre, Ms. Gerard had the privilege of working with Somalian refugees sharing stories of their pilgrimages from their homeland to America.

John S. Anastasi (Author) works written for the stage include In My Father's Eyes, a play with music, produced at the Forum Theater (New Jersey) and the historic Mishler Theater (Altoona, PA). Music by David Friedman. It was selected as an alternate at the New York Fringe Festival summer 2003. Stolen Lives, a two character drama, presented at the Acorn Theater at Theatre Row after being presented at the Mishler Theater. “Pied a Terre” enjoyed a successful off Broadway premiere at the Kirk Theater at Theatre Row in 2007. Since being published by Samuel French in 2008, Pied a Terre has been produced at the Cork Theatre in Ireland and has been fully translated to Chinese and produced at the Shanghai Grand Theatre in China as well as multiple cities in China. “Pied a Terre” has been optioned for a Broadway production in the near future. I Forgive You, Ronald Reagan was produced off Broadway at the Beckett Theatre in Manhattan in Summer 2013. It has been recently published by Dramatic Publishing of Chicago. Transition was presented as stage readings at the Dorothy Strelsin Theatre and the 5th Wall Theatre/Richmond Triangle Players in Richmond Virginia. In January 2015 Transition was chosen as a finalist at the Venus Adonis Play Festival in NYC. The playwright is an active member of the Dramatist Guild of America Inc.

22Q Entertainment (Producer) (Robert Levinstein & Alan Wager) is based in New York and produces, manages and casts live events and theatre across the country. Sought-after as producers in the “site-specific” world of innovative theatre, their credits include the thriller It Is Done set in a bar (a critical success in New York…and award winning in the Los Angeles transfer) along with the New York City premiere of The Spoon River Project, which played under the stars at the historic Green-Wood Cemetery in Brooklyn. Off Broadway they produced the hilarious one woman show Italian Bred and the critically acclaimed new play The Clearing. They also served as General Managers for both My Big Gay Italian Wedding and My Big Gay Italian Funeral Off Broadway. 22Q Entertainment also teamed with the Oxygen Television Network, associate producing their Up-Front live events, and for the past two years have been the Associate Producers and Casting Directors for SHAKESPEARE ON THE SOUND in Connecticut. 22Q Entertainment was honored to be nominated for a Daytime EMMY as a Producer in 2014 for TAINTED DREAMS…an exciting new Soap Opera. www.22QEntertainment.com

Kathleen Turner (Victoria) has garnered critical acclaim for her performances in various movies including Body Heat, for which she was nominated for a Golden Globe; Romancing The Stone and Prizzi's Honor, which earned her a Golden Globe Award for each; Peggy Sue Got Married, which brought Turner both an Academy Award nomination and a Golden Globe nomination; and War of the Roses, and yet another Golden Globe nomination. Ms. Turner has also starred on Broadway in Cat On a Hot Tin Roof, for which she received a Tony nomination; Indiscretions; The Graduate; and Who’s Afraid of Virginia Woolf, for which she received a second Tony nomination. In recent years Ms. Turner had the very memorable role of Sue Collini in Showtime’s hit series, Californication, starred opposite Jason Ritter and Emily Deschanel in The Perfect Family, developed and starred in a one woman show about Molly Ivins called Red Hot Patriot: The Kick Ass Wit of Molly Ivins, starred on Broadway and on tour in High and had a supporting role opposite Jim Carrey and Jeff Daniels in Dumb and Dumber To. In addition to her film and stage credits, Turner wrote of her many accomplishments and life experiences in her 2008 autobiography titled Send Yourself Roses: Thoughts on my Life, Love, and Leading Roles, which secured a position on the New York Times Best-Seller List.

Deborah Cox (Dr. Gerard) Grammy® Award-nominated and multi-platinum R&B/pop artist and film/TV actress made her Broadway debut as the lead in Elton John and Tim Rice’s musical, Aida. She recently starred on Broadway as Lucy in Jekyll & Hyde, and will star as Josephine Baker in Josephine in 2016. Ms. Cox began her career as Celine Dion’s background singer before securing her first recording contract with Rock and Roll Hall of Famer Clive Davis. Since then she has recorded six award-winning albums. Her platinum selling debut album, Deborah Cox, won her a Juno Award and nomination for an American Music Award. “Nobody’s Supposed To Be Here”, from her second album, One Wish, held the record for being the longest running #1 R&B Single for 14 consecutive weeks and earned her an NAACP Image Award nomination, a Soul Train Award, A Lady Of Soul Award, Best Female vocalist Juno nomination and a Billboard Music Award Nomination for R&B Single Of The Year. The Canadian born star has an impressive twelve #1 songs on Billboard’s Hot Dance Club Play chart. In 2000, Cox collaborated with Whitney Houston to record the duet “Same Script Different Cast” for Houston’s Greatest Hits CD. www.deborahcox.com, @Deborah_Cox, www.facebook.com/DeborahCoxDRG