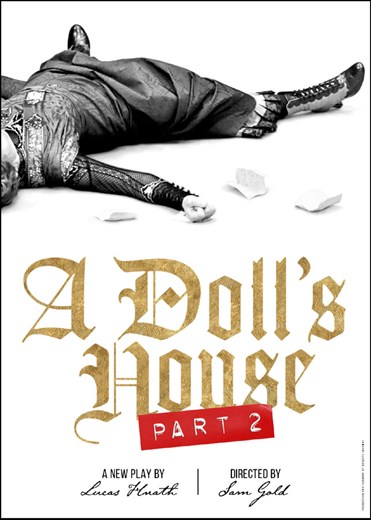 In the final scene of Ibsen's 1879 ground-breaking masterwork, Nora Helmer makes the shocking decision to leave her husband and children, and begin a life on her own. This climactic event — when Nora slams the door on everything in her life — instantly propelled world drama into the modern age. In A Doll’s House, Part 2, many years have passed since Nora’s exit. Now, there’s a knock on that same door. Nora has returned. But why? And what will it mean for those she left behind?

Julie White (Nora) won the Tony Award for her starring role in the The Little Dog Laughed. For that same performance, she also won an Obie Award and a L.A. Ovation Award, and she was nominated for the Drama Desk, Outer Critics Circle and the Lucille Lortel Awards. Other Broadway appearances include the revival of A.R. Gurney’s Sylvia, Airline Highway (Tony, Drama Desk and Drama League nominations), Vanya and Sonia and Masha and Spike, and The Heidi Chronicles. Off-Broadway credits include The Understudy, From Up Here (Drama Desk and Drama League nominations), Fiction, Twelfth Night, and Bad Dates for Playwrights Horizons. Her film work includes Lincoln; Transformers 1, 2, & 3; Michael Clayton; The Astronaut Farmer; and the animated film Monsters vs Aliens. On television, she has had roles on “Nurse Jackie,” "Alpha House,” "Go On" (Gracie Award), “The Good Wife,” “Man Seeking Woman”, “You’re The Worst”, “Cavemen,” "Six Feet Under,” “Grace Under Fire,” and "Law and Order: SVU.”

Stephen McKinley Henderson (Torvald) has worked on stages throughout the United States, abroad, on Broadway, off-Broadway, in television and film. Considered among the top celebrated interpreters of playwright August Wilson’s work, he received a Tony Award nomination and the Richard Seff Award for his performance as Bono in the 2010 revival of Fences with Denzel Washington and Viola Davis, and later reprised the role in the Academy Award nominated film adaptation directed by Mr. Washington. His role as Turnbo in August Wilson’s Jitney earned him a Drama Desk, an Obie, and an Audelco award, as well as a Los Angeles NAACP Theatre Award and a Los Angeles Drama Critics Circle Award. He earned Obie and Lucille Lortel Awards for Stephen Adley Guirgis’ Pulitzer Prize-winning Between Riverside and Crazy, in which Mr. Henderson created the leading role. His film and television work includes Manchester By The Sea; the debut season of Aaron Sorkin’s HBO series, “Newsroom”; Steven Spielberg’s Lincoln; Tower Heist; Extremely Loud and Incredibly Close; Red Hook Summer (A Spike Lee Joint); and Everyday People. He is a retired Professor and former Chair of the Department of Theatre and Dance for the State University of New York at Buffalo. He is a member of the LAByrinth Theater Company and The Actor’s Center, and is a Fox Foundation Fellow.

Erin Wilhelmi (Emmy) made her Broadway debut in Ivo Van Hove's revival of The Crucible. Her Off Broadway credits include American Hero (Second Stage; Williamstown Theatre Festival), The Great Immensity (The Public Theater), Core Values (Ars Nova), and The Great God Pan (Playwrights Horizons). Her film credits include Sweet, Sweet Lonely Girl; The Perks of Being a Wallflower; The English Teacher; Disconnect; Jamie Marks is Dead; and All Relative. Her television credits include "The Accidental Wolf," "The Knick, " "Taxi Brooklyn," "Eye Candy," and "Gossip Girl." She received her BFA from the University of Evansville.