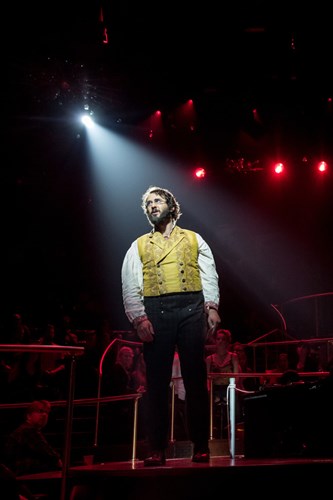 For Josh Groban, a Boot Camp for Broadway

To prepare for his role in "Natasha, Pierre & the Great Comet of 1812," he tackles the accordion - and reluctantly, learned to dance.

For Josh Groban, a Boot Camp for Broadway - The New York Times

Josh Groban has sold more than 30 million records, making him a household name all over the world. But when he began talking to the producers and creators behind the Broadway-bound musical “Natasha, Pierre & the Great Comet of 1812,” it was clear he’d need to learn a few things.

Sure, he had played Tevye in high school; he had shared his pure, clean baritone at concerts before enormous crowds; and he had done charming cameos in TV series like “Ally McBeal” and “Parks and Recreation.” But his theater education had ended in 1999, when he dropped out of Carnegie Mellon University as a freshman to pursue a recording career. From then on, Broadway had just been a dream.