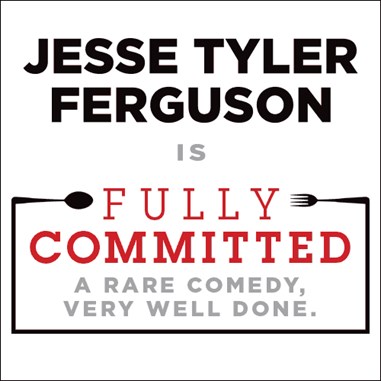 At the helm of this delectably funny one‐man show is Tony‐nominated director Jason Moore (Pitch Perfect, Avenue Q, the upcoming Sisters starring Tina Fey and Amy Poehler). For this new production, Mode is updating the play to reflect today’s foodie and restaurant culture, which has only  intensified since the piece made its debut. The mouthwatering comedy will play a strictly limited engagement in Spring 2016 on Broadway at the Lyceum Theatre. Barbara Whitman and Patrick Catullo will produce FULLY COMMITTED.

“I’m beyond thrilled to be making my return to Broadway in a piece I love so much. Becky Mode’s hilarious play Fully Committed perfectly captures a genius story at the intersection of food, entertainment and pop culture—and I’m really looking forward to start working with Jason on all of these  incredibly funny characters,” says Jesse Tyler Ferguson. “It’s also a dream to be reuniting with Patrick and Barbara who helped bring The 25th Annual Putnam County Spelling Bee to Broadway. It feels like a homecoming and I know we are all going to have a ball putting this show together!"

“It’s so exciting to be working with Jesse and Becky on Fully Committed,” adds Jason Moore. “I’ve been searching for my next Broadway project, and this is it—Jesse is a remarkable actor and comedian, and Becky’s script is hysterical.”

You think you’re having a bad day? Meet Sam. He works the red‐hot reservation line at one of New York’s trendiest restaurants, where the best food inspires the worst behavior. Coercion, petty threats, bribes, histrionics—a cast of desperate callers, all brought to life by Ferguson, will stop at nothing to land a prime reservation, or the right table in Becky Mode’s hilarious and delicious comedy. Amid the barrage, Sam has his own problems to deal with. While juggling scheming socialites, name‐dropping wannabes, fickle celebrities and egomaniacal bosses, can he still manage to look out for himself?

Hailed as “immensely entertaining,” by The New York Times, and named one of the “Top 10 Plays of the Year” by Time magazine, Fully Committed was originally commissioned and developed by David Stone, and then produced at the Vineyard Theater in a production directed by Nicholas Martin. After opening to rave reviews and quickly selling out its initial engagement, the production transferred to the Cherry Lane Theatre, running for nearly 700 performances in New York. Fully Committed has been subsequently seen in productions around the world, including Los Angeles, San Francisco, Boston, Chicago, London and Paris.

The New York Times: “Rarely has a playwright pegged so entertainingly the insecurity at the heart of the New York sense of entitlement. Anyone who has ever been on the receiving end in a menial job will find comfort
in Sam’s plight.” “A richly comic affirmation of everything I've ever heard, or suspected, about the bad behavior that good food can inspire.”

New York Magazine: “Becky Mode has been an actress, waitress, and coatcheck girl, excellent training for a playwright and mandatory for this play. For the price of an entrée, she serves up all the splendors and
miseries of restaurant life prepared to a fare‐thee‐well.”

Time Out New York: “Hilarious and touching, gallops along at a swift, almost frantic pace.”

Variety: “Furiously fast paced and lots of fun. A tasty concoction of a play.”

Fully Committed is based on characters created by playwright Becky Mode and Mark Setlock, from their experience working in the blistering world of the high‐end restaurant industry.

JESSE TYLER FERGUSON (Sam, Bunny Vandevere, Carolann Rosenstein‐Fishburn, Mrs. Watanabe, Chef, Sam’s Dad, Jean‐Claude, Dominick Veccini, Mrs. Sebag, Mrs. Buxbaum, Mr. Zagat, Laryngitis Guy, Judith Rush, Depressed Secretary, Smarmy Man, and others) currently stars as “Mitchell Pritchett” on the Emmy Award-winning ABC comedy “Modern Family.” Now in its seventh season, the show has earned five Emmy Awards for Outstanding Comedy Series, a Golden Globe Award for Outstanding Comedy Series and four Screen Actors Guild Awards for Outstanding Performance by an Ensemble in a Comedy Series. Ferguson has also received five
Emmy Award nominations for Outstanding Supporting Actor in a Comedy Series and three People’s Choice Award nominations for "Favorite Comedic TV Actor" on behalf of “Modern Family.” No stranger to television, Ferguson received rave reviews and was honored by The Hollywood Reporter in 2006 as one of “Ten to Watch” for his role on the CBS ensemble sitcom “The Class.” His additional television credits include “Do Not Disturb” and “Ugly Betty.” Film credits include Untraceable and Wonderful World. Ferguson made his Broadway debut at the age of 21 as “Chip” in George C. Wolfe’s revival of On the Town. He later went on to originate the role of "Leaf Coneybear" in the Tony Award‐winning Broadway musical The 25th Annual Putnam County Spelling Bee (Drama Desk Award for Outstanding Ensemble Performance; Drama League nomination for Distinguished Performance). He has worked extensively with The New York Public Theatre’s Shakespeare in the Park in such notable productions as The Tempest, The Comedy Of Errors (Drama League nomination for Distinguished Performance), The Merchant Of Venice, The Winter’s Tale and A Midsummer Night’s Dream (Drama League
nomination for Distinguished Performance). Other theatre credits include world premieres of Christopher Shinn's Where Do We Live and Michael John LaChiusa's Little Fish, as well as “Leo Bloom” in The Producers and “Sir Robin” in Spamalot, both at The Hollywood Bowl. A longstanding advocate for marriage equality, Ferguson co‐founded Tie The Knot in 2012 with his husband, where they design limited edition bow ties with all the proceeds going to various organizations that fight for civil rights for gay and lesbian Americans. Their first collection debuted in November 2012 and sold out in less than a month. They have released new collections seasonally since and featured ties designed by guest designers including Isaac Mizrahi, George Takei, Tim Gunn and Bryan Cranston. Ferguson is also an advocate and active supporter of the Human Rights Campaign. In 2011,
he was honored with the HRC's Media Award, which recognizes an individual for establishing a positive, increased awareness of gay, lesbian, bisexual and transgender issues in the media.

JASON MOORE (Director) is a breakout director whose feature directorial debut, Pitch Perfect, starring Anna Kendrick and Rebel Wilson, was both a critical and commercial success. He also served as the executive producer on the sequel, Pitch Perfect 2. His upcoming film, Sisters, starring Tina Fey and Amy Poehler will open this December. Moore is also the creative force behind some of Broadway’s biggest hits. He directed Shrek the Musical, for which he earned Outer Critics Circle and Drama Desk award nominations; Steel Magnolias; and Avenue Q, for which he received a Tony Award nomination. He also directed Jerry Springer: The Opera at Carnegie Hall and the  Off‐Broadway hits Speech and Debate, Avenue Q, Guardians and The Crumple Zone, as well as Tales of the City, with music by the Scissor Sisters, which premiered at the American Conservatory Theater. Moore’s previous television directorial credits include episodes of “Dawson's Creek,” “Everwood,” “One Tree Hill,” “Brothers and Sisters,” and “Trophy Wife.” Moore divides his time between New York and Los Angeles and received a B.A. in Performance Studies from Northwestern University.

BECKY MODE (Playwright). Becky’s first play, Fully Committed, opened at the Vineyard Theatre in 1999 and ran Off‐Broadway for a year and a half at the Cherry Lane Theatre. Time magazine named it one of the ten best plays of 2000, and since 2001 it has been one of the ten most produced plays in the United States, with extended commercial runs in San Francisco, Los Angeles, Boston, London and Paris. The play has traveled to Finland, Japan, South Africa, Brazil, Australia, Sweden, Estonia and Poland. Becky is  currently working as a consulting producer on a new show for AMC based on the Danish TV series “Bankerot” (Broke). She has recently worked as a consulting producer for Smash (NBC) and A Gifted Man (CBS). She has also worked as a writer on “Cosby,” “Little Bill,” “Out of the Box,” and HBO’s “A Little Curious.” She has developed pilots for HBO, ABC, CBS and NBC, including “Born in Brooklyn” with Maria Bello. Before becoming a writer, Becky worked as an actor. She went to graduate school at the American Repertory Theatre Institute for Advanced Theatre Training at Harvard. Favorite roles include “Ann, The Librarian” in Daisy Mayer’s cult classic Party
Girl; “Susan Walker” in Ann Bogart’s Once in a Lifetime; and the young “Jane Seymour” in A&E’s “I Remember You,” opposite Clark Gregg and Daniel J. Travanti. She also spent many years waitressing, coat checking and
taking phone reservations at some of New York’s finest restaurants. Becky lives in Brooklyn, NY, with her husband and their two children, Leo and Katie.