Jenn Colella Returns to COME FROM AWAY 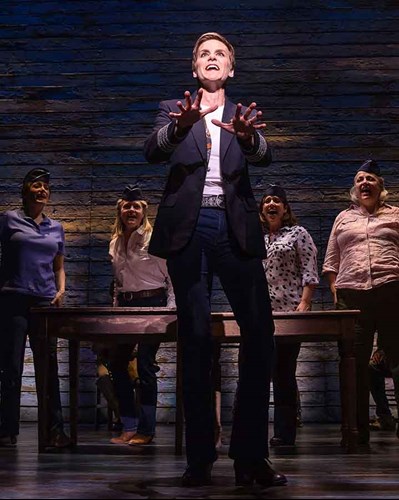 RETURNS TO THE ROCK

FOR A STRICTLY LIMITED SUMMER ENGAGEMENT

“COME FROM AWAY IS A GORGEOUS LIFE-AFFIRMING CELEBRATION OF LOVE AND HUMANITY. WITH EVERYTHING HAPPENING IN THE WORLD RIGHT NOW, IT'S WHAT WE ALL NEED. COME FROM NEAR, COME FROM FAR, JUST MAKE SURE YOU COME AND SEE THIS GLORIOUS SHOW.” – Stefan Kyriazis, Daily Express (UK) – March 2, 2022

(New York, NY) The Tony and Olivier Award-winning musical COME FROM AWAY will welcome original Broadway cast member Jenn Colella back to “The Rock” as ‘Beverley/Annette & others,’ a performance that earned her a 2017 Tony Award nomination and Outer Critics Circle, Drama Desk, Craig Noel, Helen Hayes and Dora Awards, for a strictly limited engagement from Tuesday, June 21 through Sunday, August 7, 2022 at Broadway’s Gerald Schoenfeld Theatre (236 West 45th Street). Sharone Sayegh (The Band’s Visit) will also join the Broadway company direct from the North American Tour on Tuesday, June 21 as ‘Bonnie & others.’

COME FROM AWAY began performances on February 18, 2017, and officially opened to critical acclaim on March 12, 2017, at Broadway’s Gerald Schoenfeld Theatre, where the show continued to play to standing-room-only audiences until it was forced to shut down due to the COVID-19 pandemic on March 12, 2020, the evening of its third anniversary on Broadway. COME FROM AWAY reopened on Broadway on September 21, 2021.

COME FROM AWAY tells the remarkable true story of 7,000 stranded passengers and the small town in Newfoundland that welcomed them. Cultures clashed and nerves ran high, but uneasiness turned into trust, music soared into the night, and gratitude grew into enduring friendships.

Apple Original Films’ filmed version of the Tony & Olivier Award-winning hit musical COME FROM AWAY, produced by eOne, Hasbro’s entertainment studio, premiered globally on Apple TV+ on Friday, September 10, and was nominated for the Critics Choice Award for Best Movie made for Television. COME FROM AWAY, marks the first Broadway show to be streamed by Apple TV+, and is directed by Tony Award-winner Christopher Ashley, who directed the original Broadway production, and stars an ensemble cast led by members of the Broadway show.  The live performance of COME FROM AWAY was filmed in New York at the Gerald Schoenfeld Theatre in May 2021, where the Broadway production is staged, for an audience that included 9/11 survivors and front-line workers; and, employed over 200 people including members of the Broadway crew, staff and creative teams.

Today Craft Recordings and Concord Theatricals released Covers From Away, a new folk album featuring songs from the hit Tony and Olivier Award-winning musical COME FROM AWAY reinterpreted by the Newfoundland and Labrador bands and artists who originally inspired the sound of the musical.  The album was recorded in summer 2021 in various locations throughout Newfoundland, Canada, and was produced by Irene Sankoff and David Hein, along with Ian Eisendrath, Bob Hallett and Sean Patrick Flahaven. Two songs from the album, “Welcome To The Rock” (performed by The Navigators) and “Screech Out” (performed by The Dardanelles), can both be heard in the end credits of the Apple original film COME FROM AWAY, now streaming globally on Apple TV+.

The Shubert Organization is committed to the health and safety of all members of the Broadway community—theatre employees, production staff, cast, and audience members. View Details and Terms & Conditions. Safety guidelines will continue to be updated on the official COME FROM AWAY website.

COME FROM AWAY was originally co-produced in 2015 by La Jolla Playhouse and Seattle Repertory Theatre, and presented in 2016 by Ford’s Theatre in Washington, DC and Mirvish Productions at the Royal Alexandra Theatre in Toronto, CA. COME FROM AWAY (NAMT Festival 2013) was originally developed at the Canadian Music Theatre Project, Michael Rubinoff Producer, Sheridan College in Oakville, Ontario, Canada and was further developed at Goodspeed Musicals’ Festival of New Artists, in East Haddam, CT. The Canada Council for the Arts, The Ontario Arts Council, and the Fifth Avenue Theatre in Seattle WA also provided development support.

WHAT THE CRITICS ARE SAYING

“YOU LEAVE THE THEATRE FULL OF HOPE!” – Daily Express

“A HIT AND A MASTERPIECE! JOYOUS, UPLIFTING AND PENTY OF HUMOR!” – Herald Sun

“BEAUTIFULLY GIVES PEOPLE REASON TO COME TO THE THEATER—AND COME TOGETHER.” – Chicago Tribune

“A MIGHTY MUSICAL THAT REMINDS US OF THE POWER OF HUMAN GOODNESS!” – Los Angeles Times

“EXUBERANT! THE IMPACT IT’S HAVING ON HEARTS AND MINDS IS REMARKABLE. AN EFFERVESCENT MUSICAL ANTIDOTE FOR WHAT AILS THE AMERICAN SOUL.” – The Washington Post

“THIS STORY TOUCHED THE WORLD AND CELEBRATES THE BEST THAT WE CAN ALL BE. WE NEED IT, ESPECIALLY RIGHT NOW.” – Tom Brokaw, NBC News

CRITIC’S PICK! “THE CATHARSIS WE NEED IN THIS AMERICAN MOMENT. IMAGINATIVE AND EMOTIONAL. A GALE OF GOOD WILL BLOWS OUT OF THIS SMART, ROBUST SHOW.” – The New York Times

“IT DOES WHAT ALL THE BEST MUSICALS DO: IT TAKES YOU TO A PLACE WHERE YOU DIDN’T KNOW YOU WANTED TO GO, AND MAKES YOU NOT WANT TO LEAVE.” – Newsweek

“A GLOBAL PHENOMENON!” – The Guardian

“THIS MIRACULOUS MASTERPIECE IS TOTALLY, SOUL-FEEDINGLY WONDERFUL.” – Time Out

“A MOVING AND THOROUGHLY ENTERTAINING TRIBUTE TO THE INDOMITABLE HUMAN SPIRIT.” – Variety

JENN COLELLA (Beverley/Annette & others) just ended a sold-out run in Suffs as Carrie Chapman Catt at The Public Theatre, for which she garnered an Outer Critics Circle Award nomination. Jenn starred in the Tony Award-winning smash hit musical Come From Away as 'Beverley/Annette and others,' in a performance that garnered her 2017 Outer Critics Circle and Drama Desk Awards and a 2017 Tony Award nomination for Best Featured Actress in a Musical, as well as Craig Noel, Helen Hayes and Dora Awards for pre-Broadway productions of Come From Away. Jenn won a Grammy Award for her work on the Dear Evan Hansen cast recording. She has been previously seen on Broadway in If/Then, Chaplin, High Fidelity and Urban Cowboy (Outer Critics Circle Award nomination), Off-Broadway in Beebo Brinker Chronicles, Lucky Guy, Slut and Closer Than Ever. Jenn's select regional credits include Come From Away (La Jolla Playhouse, Ford's Theatre, Toronto), Peter Pan (Sacramento Music Circus & PCLO) and Side Show (Kennedy Center). TV credits include "Feed the Beast," "Elementary," "All My Children," "Rescue Me," "The Good Wife," “The Code,” “Madam Secretary,” and “Evil.”  She has been seen on film in Uncertainty with Joseph Gordon-Levitt, and stars in the live capture film of Come From Away on Apple Plus, streaming now.  Jenn Colella is an MFA Acting graduate of UC Irvine.

SHARONE SAYEGH (Bonnie & others) is thrilled to join the Broadway company of Come From Away after playing the role on the national tour. On Broadway she originated the role of Anna in The Band’s Visit, and made her debut in Mamma Mia!. Off-Broadway: Road Show (City Center Encores), The Band’s Visit (Atlantic, World Premiere), The Wildness (Ars Nova, World Premiere). Regional: La Jolla Playhouse, Muny, Florida Rep, San Jose Rep. TV: “Instinct” (CBS), “Limitless” (CBS). Love and gratitude to the CFA fam, DGRW, her mishpacha, Joe, and Zev. @sharonesayegh