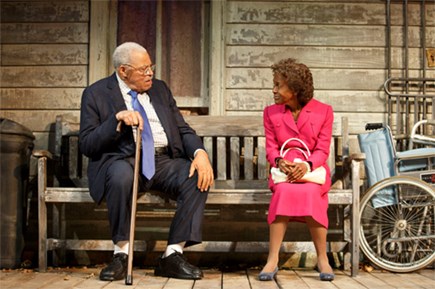 James Earl Jones and Cicely Tyson Lay Their Cards on the Table
By Eric Grode Oct. 7, 2015

After an early out-of-town preview of his play “The Gin Game” in 1976, one filled with flubbed lines and disconcertingly long silences, D. L. Coburn sat in a hotel room with the director. “It was about 3 or 4 in the morning,” he recalls, “and I said, ‘My God, what are we going to do?’ That’s when I realized that this play is really hard.”

Thousands of performers have come to the same conclusion in the nearly 40 years since that late-night epiphany. “The Gin Game,” which went on to win the Pulitzer Prize for drama, pits two actors of a certain age against each other in a constant series of anxiety- and soul-baring card games. James Earl Jones and Cicely Tyson star in the current revival, which opens Oct. 14 at the John Golden Theater.

Virtually every shift in power between the two characters, a pair of lonely nursing home residents named Weller Martin and Fonsia Dorsey, is accompanied — and often triggered — by a shuffle or a deal or an angry grab of the playing cards.