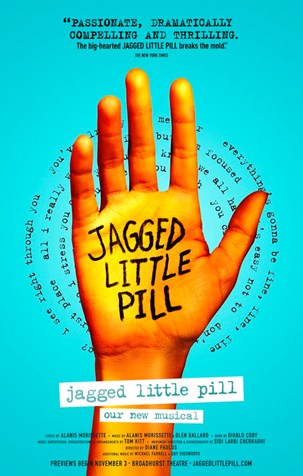 TO OPEN ON BROADWAY THIS FALL

AT THE BROADHURST THEATRE

Inspired by the groundbreaking Grammy Award-winning album by Alanis Morissette

Tickets for the musical will go on sale to the general public on Thursday, May 23, at 10:00AM at Telecharge.com. Special pre-sale access to tickets will be available to members of the Jagged Little Pill fan club from May 6–8 (sign up at jaggedlittlepill.com), American Express® Cardholders from May 8–16, and Audience Rewards from May 16-23 (audiencerewards.com).

ALANIS MORISSETTE (Music & Lyrics) Since 1995, Alanis Morissette has been one of the most influential singer-songwriter-musicians in contemporary music. Her deeply expressive music and performances have earned vast critical praise, 14 Canadian Juno Awards, 7 Grammy® Awards (with an additional 14 nominations), a Golden Globe nomination and sales of over 60 million albums worldwide. Morissette’s 1995 debut, Jagged Little Pill, was followed by such eclectic and acclaimed albums as Supposed Former Infatuation Junkie (1998), MTV Unplugged (1999), Under Rug Swept (2002), So-Called Chaos (2004), Jagged Little Pill Acoustic (2005), her greatest hits album The Collection (2005), Flavors of Entanglement (2008), Havoc and Bright Lights (2012), and Jagged Little Pill: Collector’s Edition (2015). She also contributed musically to theatrical releases, some of which include The Chronicles of Narnia, Prince of Persia, and City of Angels. In 2015, Alanis was inducted into the Canadian Music Hall of Fame. Alanis has also donated her time to a number of causes that help raise awareness and funding on a number of issues including Equality Now, Music for Relief, UN Global Tolerance, “Every Mother Counts” (a CD to which she contributed her song “Magical Child” to help prevent needless maternal deaths), and P.S. Arts. In 2016, Alanis launched “Conversation with Alanis Morissette,” a monthly podcast that features conversations with a variety of revered authors, doctors, educators and therapists. www.alanis.com

DIABLO CODY (Book) is an Academy Award-winning screenwriter of films including Juno, Young Adult, Jennifer’s Body, Ricki and the Flash, and Tully. She also created the Emmy and Golden Globe-winning series “United States of Tara” alongside Steven Spielberg, and the WGA-nominated series “One Mississippi” with Tig Notaro. Through her company, Vita Vera Films, she continues to develop shows for both cable and broadcast television with Warner Brothers Studios.  Jagged Little Pill marks her Broadway debut as playwright, following the musical’s sold-out world premiere engagement at American Repertory Theater in Boston.

DIANE PAULUS (Director) is the Terrie and Bradley Bloom Artistic Director of the American Repertory Theater (A.R.T.) at Harvard University, where Jagged Little Pill premiered in May 2018. Broadway: Waitress (Broadway and US national tour), Pippin (Tony Award, Best Revival and Best Director); The Gershwins’ Porgy and Bess (Tony Award, Best Revival; NAACP Award, Best Direction); HAIR (Tony Award, Best Revival). West End: Waitress. Off-Broadway: Gloria: A Life; In the Body of the World (Drama League nomination) at Manhattan Theatre Club; Invisible Thread at Second Stage. At A.R.T.: ExtraOrdinary, The White Card by Claudia Rankine, Crossing, Witness Uganda, Prometheus Bound, Death and the Powers: The Robots’ Opera, Best of Both Worlds, The Donkey Show. Upcoming: Pippin in Tokyo. Other recent work includes Cirque du Soleil’s Amaluna, currently on tour in the US. Paulus is Professor of the Practice of Theater in Harvard University’s English Department. She was selected for the 2014 Time 100, Time magazine’s annual list of the 100 most influential people in the world; as one of Variety’s “Trailblazing Women in Entertainment for 2014”; Boston magazine’s “50 Thought Leaders of 2014”; and Boston magazine’s 2018 “100 Most Influential People in Boston.”

GLEN BALLARD (Music) Six-time Grammy Award winner Glen Ballard is one of popular music’s most accomplished producers and songwriters, whose records have sold more than 150 million copies worldwide. Ballard’s production company Augury is currently developing original, music-driven content for television, film, and stage. During his diverse career, Ballard has worked with the biggest names in music, from Barbra Streisand and Aerosmith to Dave Matthews and Katy Perry. He produced and co-wrote Alanis Morissette’s Jagged Little Pill (33 million worldwide, four Grammys, and named Best Album of the Decade by Billboard Magazine), wrote and arranged “Man in the Mirror” for Michael Jackson, and co-wrote and produced the Grammy-winning and Oscar-nominated song “Believe” (Josh Groban) for the feature film The Polar Express. He has written and produced songs for Quincy Jones, Aretha Franklin, Shakira, Idina Menzel, George Benson, George Straight, Wilson Phillips, Van Halen, Chaka Khan, Patti Austin, Al Jarreau, Andrea Bocelli, and many others. His production credits include producing and arranging records for Annie Lennox, No Doubt, and POD. His work in film includes composing original songs for Charlotte’s Web, Beowulf, A Christmas Carol, The Croods, The Mummy Returns, and Valentine’s Day. Ballard also wrote the lyrics and music for Ghost the Musical, which was based on the Academy Award-winning film Ghost starring Patrick Swayze and Demi Moore. After a successful run on the West End and Broadway, Ghost the Musical is currently touring worldwide.

VIVEK J. TIWARY is a producer of live entertainment from Tony-winning Broadway shows to groundbreaking immersive experiences, a media financier/investor, and a #1 New York Times bestselling author. He is the founder of Tiwary Entertainment Group (TiwaryEnt.com). His graphic novel The Fifth Beatle won numerous literary awards including the Will Eisner Comic Industry Award and two Harvey Awards. It’s a Lambda Literary Finalist for Best LGBT Graphic Novel and has been added to the Rock and Roll Hall of Fame Library and Archives. It is being adapted into a TV series that has secured unprecedented access to Beatles music; Vivek is writing and serving as Executive Producer. On Broadway, Vivek’s productions have won a combined 25 Tony Awards over 44 Tony nominations and include Green Day’s American Idiot, A Raisin In The Sun, and Mel Brooks’ The Producers. Vivek is also a pioneering producer in the world of site-specific, tech-based, and immersive theatre. He consulted on the creation and development of The Walking Dead Escape and The Walking Dead Experience. He served on the Board of Directors for New York’s seminal GAle GAtes—widely considered to be the founders of immersive theatre. He also produced experiential shows and installations for boundary-pushing companies such as The Wooster Group, Fischerspooner, and the São Paulo Art Biennial.  Among many charitable pursuits, Vivek is the Co-Founder of Musicians On Call, a nonprofit organization that uses music and entertainment to complement the healing process. Follow him on Twitter @VivekJTiwary.

ARVIND ETHAN DAVID is a producer and writer who works across film, television, comics and theatre.

Born in Malaysia of Indian descent, Arvind has lived and worked extensively in the UK, Asia and the US. In television, he most recently was Executive Producer of the acclaimed BBC America/Netflix series “Dirk Gently’s Holistic Detective Agency,” starring Elijah Wood, which quickly became a cult favorite over its two seasons. David has produced eight feature films, including the British hit comedy The Infidel, and is currently in post-production on The Garden of Evening Mists for HBO. Arvind  is also a comic book writer, whose credits include the Stoker Award-nominated Darkness Visible, which he is currently adapting for television for Intrepid Pictures and IDW Entertainment  In addition to Jagged Little Pill,Arvind’s theatrical work includes British comedian David Baddiel and Erran Baron Cohen’s The Infidel Musical, based on their film of the same name, which is currently prepping for a West End run in 2020 and his LA Weekly award winning stage adaptation of Dirk Gently is published by Samuel French and has been performed hundreds of times in multiple languages around the world.  Arvind is based in Los Angeles, where he serves as the head of producing and financing company Prodigal (www.prodigal.tv), and where he lives with his wife, Janine Berridge and their daughter Odetta and a collection of warring cats.  Jagged Little Pill represents Arvind’s Broadway debut.

AMERICAN REPERTORY THEATER (A.R.T.) at Harvard University is a leading force in the American theater, producing groundbreaking work in Cambridge and beyond. A.R.T. was founded in 1980 by Robert Brustein, who served as Artistic Director until 2002, when he was succeeded by Robert Woodruff.  Diane Paulus began her tenure as Terrie and Bradley Bloom Artistic Director in 2008. Under the leadership of Paulus and Executive Producer Diane Borger, A.R.T. seeks to expand the boundaries of theater by producing transformative theatrical experiences, always including the audience as a central partner. A.R.T. developed and premiered JAGGED LITTLE PILL in 2018, where it played a ten-week record-breaking engagement. Throughout its history, A.R.T. has transferred numerous productions to New York, including Waitress (dir. Paulus), The Glass Menagerie, Crossing, and Sleep No More. The theater has been honored with many distinguished awards including the Tony Award for Best New Play for All the Way (2014); consecutive Tony Awards for Best Revival of a Musical for Pippin (2013) and The Gershwins’ Porgy and Bess (2012), both of which Paulus directed, and sixteen other Tony Awards since 2012; a Pulitzer Prize; a Jujamcyn Prize for outstanding contribution to the development of creative talent; the Regional Theater Tony Award; and more than 100 Elliot Norton and IRNE Awards.