In THE PLAY THAT GOES WRONG, It's Murder Strictly for Laughs 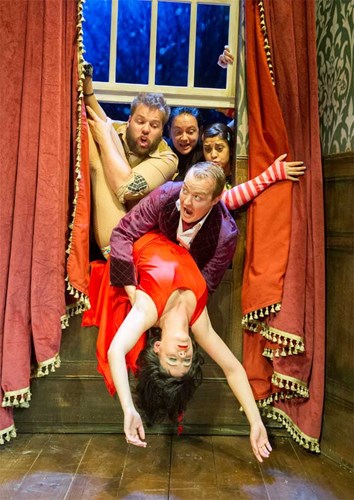 In ‘The Play That Goes Wrong,’ It’s Murder, Strictly for Laughs

LONDON — The low point came one summer when Henry Lewis was working at a burger joint, Henry Shields at a pub and Jonathan Sayer at a call center.

They had been friends since acting school — so close, and so broke, that they were still living together several years later — but the improv comedy they had been perfecting just wasn’t drawing big enough crowds.

So at 2 a.m. one night after work they decided to try something different. Within a few weeks, they had banged out the script for a spare-no-sight-gag farce that has become an improbable long-running West End hit, spawning productions in Budapest, Paris, Rome, Tokyo, Istanbul and now a transfer to Broadway, where it is backed in part by J. J. Abrams (the director of “Star Wars: The Force Awakens”), who is enthusiastically promoting the show.