In 'Fiddler,' a Balancing Act to Rival Teyve's 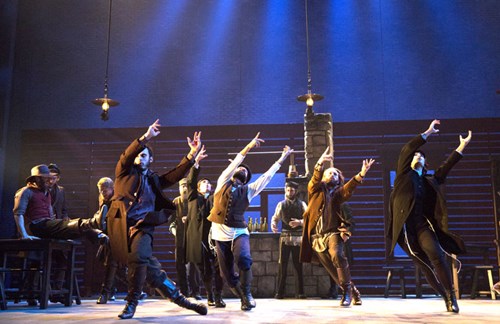 In 'Fiddler,' a Balancing Act to Rival Teyve's
by Brian Seibert

“Fiddler on the Roof” is about balance. The idea is there in the title image and at the start of the show, when the dairyman protagonist, Tevye, explains that the people of his shtetl maintain their balance by relying on tradition. Much of the plot challenges him to keep his footing while adapting to new ways.

Anyone staging a revival of “Fiddler,” especially on Broadway, faces a similar test: how to offer a fresh take without tilting too far from what audiences know and love. For the “Fiddler” now playing at the Broadway Theater, one of the bolder decisions taken by the director, Bartlett Sher, was to hire someone to update the choreography made by the show’s original director, Jerome Robbins.

On the one hand, Mr. Sher’s choice, Hofesh Shechter, is an outsider who had never choreographed a Broadway show. He runs an acclaimed dance company in London, where in recent months a series of performances billed as Hofest has spread his aggressive and cheeky aesthetic across multiple theaters, including the Brixton Academy (home to rock and pop music) and the Royal Opera House. His company has performed at the Brooklyn Academy of Music. He has choreographed for the Royal Ballet, and his works are in the repertory of major European dance troupes and American ones like Alvin Ailey American Dance Theater.