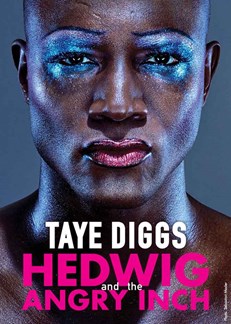 The Tony Award Winning
Best Revival of a Musical
'Hedwig and the Angry Inch
' to Play Final Broadway Performance
Sunday, September 13 at the Belasco Theatre

Hedwig and the Angry Inch, the acclaimed 2014 Tony Award winning Best Musical Revival, will play its final performance at the Belasco Theatre (111 West 44th Street) on Sunday, September 13 at 3PM.

The production with book by John Cameron Mitchell, music and lyrics by Stephen Trask and directed by Michael Mayer was initially announced as a 16-week limited engagement that turned into a smash hit 76-week run. On Sunday, September 13, Hedwig and the Angry Inch will have played 22 previews and 506 regular performances.

Beyond Broadway, a national tour of Hedwig and the Angry Inch will start in San Francisco in October 4, 2016 with productions also being planned for the West End and Australia.

Producer David Binder said, “When we announced our limited 16-week Broadway engagement of Hedwig, never in my wildest dreams did I think it would run for a year and a half. Hedwig heralded a historic year of acceptance and celebration across America. It has been a privilege to work with our extraordinary leading men Neil, Andrew, Michael, John, Darren and Taye; Lena Hall, Rebecca Naomi Jones, Shannon Conley, and our kick ass band Tits of Clay. I am so happy that Michael Mayer’s groundbreaking production has introduced Hedwig to a new generation of fans and brought John and Stephen’s downtown show into the mainstream. The vision of these artists was truly ahead of its time. I couldn’t be prouder of the entire team and am thrilled that audiences across the US will soon be able to experience our show when it begins its national tour.”

Hedwig and the Angry Inch currently stars Taye Diggs as Hedwig and Rebecca Naomi Jones as Yitzhak. The production has received rave reviews and is winner of four 2014 Tony Awards and won Best Musical Revival by the Tony Awards, the Drama Desk Awards, Drama League Awards, and Outer Critics Circle Awards. The Grammy nominated Original Broadway Cast album for Hedwig and the Angry Inch is available from Atlantic Records.

“Internationally ignored song stylist” Hedwig Robinson (Taye Diggs) brings her fourth-wall-smashing rock and roll saga to New York to set the record straight about her life, her loves, and the botched operation that left her with that “angry inch.”

Hedwig has inspired a generation of young theatre writers and audiences. This wickedly funny and heartbreaking show was called “the Best Rock Musical Ever” by Rolling Stone and “the most exciting rock score written for the theatre since, oh, ever,” by Time Magazine.

Hedwig and the Angry Inch was originally produced by David Binder off off Broadway at Westbeth and then, under the direction of Peter Askin, ran over two years at the Jane Street Theatre beginning in February 1998. The musical won the Outer Critics Circle Award for Best Off-Broadway Musical and both John Cameron Mitchell and Stephen Trask won Obies in 2001. It won a 1998 New York Magazine Award and Entertainment Weekly’s “Soundtrack of the Year” Award. Time Magazine named Hedwig the Top Musical of 1998.

The film of Hedwig and the Angry Inch, directed by John Cameron Mitchell, won the Audience Award and Best Director Awards at Sundance. Mitchell won the Best New Director from the National Board of Review, the Gotham Awards, and the LA Critics Society. Stage productions have played for many years in Japan and in 2008, Korea hosted a popular televised reality show about the search for a new star to play Hedwig.