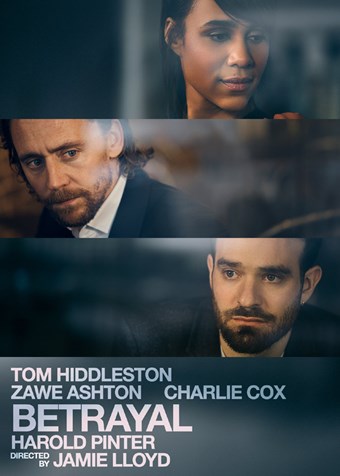 WITH AN OFFICIAL OPENING NIGHT SET FOR SEPTEMBER 5

New York, NY – The Jamie Lloyd Company, the successful partnership between Ambassador Theatre Group and Artistic Director Jamie Lloyd, is proud to announce that their production of Harold Pinter’s Betrayal will open on Broadway following its smash-hit, extended run in London’s West End. Directed by Mr. Lloyd, Betrayal stars Golden Globe, Olivier, and Evening Standard Award winner Tom Hiddleston, Zawe Ashton, and Charlie Cox, all making their Broadway debuts as Robert, Jerry, and Emma. They will be joined by Eddie Arnold as the Waiter. The strictly limited 17-week engagement will begin performances Wednesday, August 14 at the Bernard B. Jacobs Theatre (242 West 45th Street), with an official opening night on Thursday, September 5 at 6:30pm.

“Watching this remarkable cast bring new life to Harold Pinter’s greatest work has been one of the most gratifying and exciting experiences of my life in the theater. I am thrilled that American audiences will have the chance to witness their stunning performances”, said Jamie Lloyd.

This production formed the culmination of Pinter at the Pinter, an unprecedented London season of Harold Pinter’s work taking place over the 2018/19 season. This mammoth project consisted of over thirty pieces including all one-act plays by the most important playwright of the 20th century. Marking the tenth anniversary of Pinter’s death, Betrayal played in the West End theater that bears his name, breaking all box office records.

With poetic precision, rich humor, and an extraordinary emotional force, Betrayal charts a compelling seven-year romance, thrillingly captured in reverse chronological order. The complexities of the human heart are explored in this, “the greatest, and the most moving, of all Pinter’s plays” (The Telegraph).

The creative team for Betrayal includes scenic and costume design by Soutra Gilmour, lighting design by Jon Clark, and sound design and music by Ben and Max Ringham. Casting is by Jim Carnahan, CSA.

Zawe Ashton stars in Dan Gilroy’s highly anticipated feature Velvet Buzzsaw, opposite Jake Gyllenhaal, which premiered at the Sundance Film Festival, on Netflix. Most recently, Zawe was seen in the six-part BBC/Netflix co-production Wanderlust co-starring Toni Collette and Steven Mackintosh. Also an accomplished writer, Zawe’s first novel, Character Breakdown, was published by Penguin in April 2019. Her other film and television credits include “Guerrilla”, Nocturnal Animals, “Fresh Meat”, and “Not Safe for Work”.

Charlie Cox was the lead in the Netflix/Marvel series “Daredevil,” which was a resounding hit with critics and fans around the world. He was most recently seen in King of Thieves, directed by James Marsh and starring Michael Caine and Michael Gambon. In 2014, Charlie starred opposite Eddie Redmayne and Felicity Jones in Working Title’s The Theory of Everything. Before that, he played the Irish enforcer Owen Sleater in the HBO series, “Boardwalk Empire”. In 2016, Charlie starred in Manhattan Theatre Club’s production of Nick Payne’s play Incognito, for which he was nominated for a Lucille Lortel Award.

Harold Pinter was born in Hackney, London in 1930. He lived with Antonia Fraser from 1975 until his death on Christmas Eve 2008. Winner of the Nobel Prize for Literature, Pinter was lauded throughout his life as one of the greatest living playwrights, who had a revolutionary impact on how theater was written and performed, and who it represented on stage. An establishment agitator who challenged injustice, he became as famous for his political interventions as for his writing later in his life. His genius was recognized within his lifetime as a recipient of the Nobel Prize for Literature in 2005, the Companion of Honor for services to Literature, the Legion D’Honneur, the European Theatre Prize, the Laurence Olivier Award and the Moliere D'Honneur for lifetime achievement. In 1999 he was made a Companion of Literature by the Royal Society of Literature, in addition to 18 other honorary degrees. After working as an actor under the stage name David Baron, Pinter went on to be a theatrical playwright, director, screenwriter, and actor. He wrote his first play, The Room, in 1957, and from there 29 plays, including The Birthday Party, The Hothouse, The Caretaker, The Homecoming, Old Times, No Man’s Land, and Betrayal. Sketches include The Black and White, Request Stop, That’s Your Trouble, Night, and Precisely. Pinter directed 27 theater productions including James Joyce's Exiles, David Mamet's Oleanna, seven plays by Simon Gray, and scores of his own plays including his last, Celebration, paired with his first, The Room, at The Almeida Theatre, London, in the spring of 2000. In film he wrote 21 screenplays including The Pumpkin Eater, The Servant, The Go-Between, The French Lieutenant's Woman, and Sleuth. He continued to act under his own name on stage and screen. He last acted two years before his death in 2006, when he appeared in Beckett’s Krapp’s Last Tape at the Royal Court Theatre, directed by Ian Rickson.

ATG Productions is the award-winning producing arm of the Ambassador Theatre Group, the world’s number one live-theater company. The company has presented high-quality musicals and plays across Broadway, the West End, and UK regions. Recent Broadway productions include the upcoming David Byrne’s American Utopia; Sunday in the Park with George; Dear Evan Hansen; Burn This; Pretty Woman; Rodgers and Hammerstein’s The King & I; and A Doll’s House, Part 2.

Benjamin Lowy Productions is a Tony Award winning and Olivier nominated production company established to produce prestige theatrical works in New York City and in London’s West End. Upcoming productions include Sea Wall/A Life starring Jake Gyllenhaal and Tom Sturridge. Last season on Broadway: The Ferryman (Tony Award), Hadestown (Tony Award), Tootsie, To Kill a Mockingbird, The Waverly Gallery. West End: Betrayal; Pinter at the Pinter; Caroline, or Change (Olivier Nomination); 9 to 5 The Musical. Previous year: Angels in America (Tony Award), Carousel, Mean Girls, Three Tall Women starring Glenda Jackson, and The Iceman Cometh starring Denzel Washington. All five productions were Tony nominated in their respective categories. Selected past Broadway credits include: A Doll’s House, Part 2 (Tony Nomination); Six Degrees of Separation (Tony Nomination); The Glass Menagerie; and Sunday in the Park with George (revival). Benjamin Lowy is a graduate of the New School’s drama program, and has previously worked at the Old Vic Theatre (London) and The Geffen Playhouse (Los Angeles) and as an assistant company manager on the Broadway show A Time to Kill.  Benjamin was named as the “Young American Australian of 2017” by the American Australian Association.

Gavin Kalin Productions is an award-winning theatrical production company that specializes in producing theater in the West End, on Broadway and across the globe. Recent credits for the West End include: Betrayal; 9 to 5 The Musical; Come From Away; Caroline, or Change; King Lear; Pinter at the Pinter; The Ferryman; Oslo; The Starry Messenger; The Night of the Iguana; and On Your Feet. UK Tour credits include: Shrek The Musical, Crazy For You, An Officer and Gentleman The Musical, and Priscilla The Musical; and on Broadway recent credits include The Iceman Cometh, Sea Wall/ A Life, Tony Award winning The Ferryman, and Tony Award winning Hadestown. Gavin is delighted to be part of the fantastic team transferring Betrayal from its run in the West end on to Broadway. Over the past five years, Gavin Kalin Productions have been part of over two hundred and fifty productions across the globe. For more information please visit www.gavinkalinproductions.com. Gavin is also the founder of Totally Theatre Productions Ltd, a TV/Video production company that specializes in producing Broadcast and online content for theater and live entertainment. Clients are worldwide with many in the West End, throughout the UK, and on Broadway. For more information please visit www.totallytheatreproductions.com

Glass Half Full Productions is a London-based production company, managed by Gareth Lake and founded by Gareth and Adam Blanshay. The team includes US Associate Producer Victoria Weinberg, UK producing team Rebecca Vaa and Pamela Jahn. Broadway and US credits include: Network, The Lightning Thief (US National Tour), Groundhog Day, Sunday in the Park with George, Living on Love, The Curious Incident of the Dog in the Night-Time (Broadway and National Tour), the Globe transfer of Twelfth Night/Richard III. UK credits include: 9 to 5 the Musical; Betrayal; Pinter at the Pinter; The Wider Earth; The Curious Incident of the Dog in the Night- Time; King Lear; Caroline, or Change; Glengarry Glen Ross; Daisy Pulls It Off; Oslo; Hamlet; Dreamgirls; Buried Child; Funny Girl; The End of Longing; The Spoils; Doctor Faustus; A Midsummer Night’s Dream; A Christmas Carol; Mack and Mabel; Made in Dagenham; Sunny Afternoon (Winner of four 2015 Olivier Awards, including Best New Musical); The Nether; Shrek (UK Tour); Dirty Rotten Scoundrels; I Can’t Sing; Ghost Stories; 1984; Ghosts (Winner of three 2014 Olivier Awards, including Best Revival); Mojo. International credits include: Charlie and the Chocolate Factory, Muriel’s Wedding the Musical, Matilda, and My Fair Lady in Australia, and Blue Man Group World Tour.

“A modern masterpiece. A theatrical landmark.” -The Telegraph

“Betrayal as I’ve never seen it before.” -WhatsOnStage