George Takei Guides ALLEGIANCE, a Musical, Not a Starship 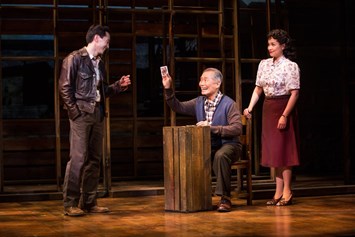 George Takei Guides ‘Allegiance,’ a Musical, Not a Starship
By Laura Collins-Hughes

Some of the team behind the new Broadway musical “Allegiance” seems a little nervous — worried that people will assume the show is a downer when they hear it’s set in one of the internment camps where Japanese-American citizens were imprisoned by the federal government during World War II.

So they’re pretty insistent that history serves merely as a backdrop. Really, said Lorenzo Thione, one of the lead producers and also a co-writer of the book, “Allegiance” is about universal uplifting themes: family, hope, redemption, love. “It’s as much about the Japanese-American internment as ‘Miss Saigon’ is about the Vietnam War,” he said.

Well, don’t tell George Takei. The actor, famous for nearly 50 years as Sulu, the “Star Trek” helmsman, is making his Broadway debut at 78 in “Allegiance,” which from its inception was inspired by his family’s experience in the camps. He had just turned 5 when he, his parents and his two younger siblings were rounded up and taken from their Los Angeles home in 1942. He was nearly 9 when they left the barbed wire and barracks behind.