Gabriel Byrne to Return to Broadway in WALKING WITH GHOSTS 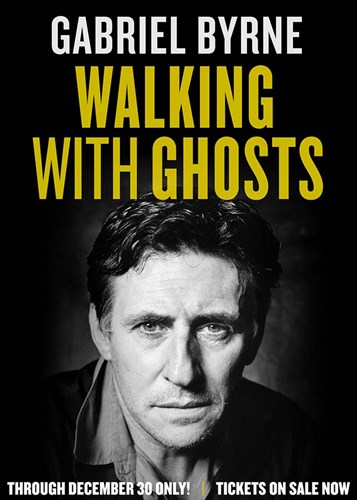 IN HIS ACCLAIMED AUTOBIOGRAPHICAL SOLO SHOW

AT THE MUSIC BOX THEATRE

New York, NY – Anne Clarke, Mara Isaacs, and Neal Street announced today that internationally renowned actor and writer Gabriel Byrne will return to Broadway in his acclaimed solo show, Walking with Ghosts, adapted from his best-selling memoir of the same name. Directed by Lonny Price, the limited engagement of Walking with Ghosts will begin performances on October 18, with an official opening night of Thursday, October 27, at the Music Box Theatre for 75 performances only. Tickets are now available at Telecharge.com.

Premiering earlier this year at Dublin’s Gaiety Theatre in an acclaimed, sold-out run, Walking with Ghosts went on to a smashing success at the Edinburgh International Festival, and will next have a limited run in London’s West End from September 7 – 16, before landing on Broadway. Heralded as an “enthralling evening” and “one of Gabriel Byrne’s greatest achievements” in The Telegraph, its author and star is considered a “master of his craft” (Sunday Times). Walking with Ghosts was commissioned and first produced by Landmark Productions.

Byrne commented, “What an honour to be on Broadway again, especially in a glorious venue like the Music Box. It was a real joy to hear laughter in a theatre during the premiere run of Walking with Ghosts in Dublin. I've chosen to be honest and unflinching in the recounting of a life from working class Dublin to Hollywood. Although rooted in the local, I hope the play has a universal resonance.”

By turns a sensory recollection of a childhood spent in a now almost vanished Ireland, a subversive commentary on stardom, and – ultimately – a lyrical homage to the people and landscapes that shape our destinies, Walking with Ghosts reflects a remarkable life's journey in all its hilarious and heartbreaking facets. Byrne’s career as an actor, writer and director spanned both stage and screen. He has starred in over 80 films and his work on Broadway has earned him two Tony Award nominations. He earned a Golden Globe win for his work in the television drama, “In Treatment.”

GABRIEL BYRNE started his acting career with Ireland's renowned Focus Theatre and Project Arts Centre.  He later joined London's Royal Court Theatre and the Royal National Theatre, where he played leading roles before moving to the United States. Byrne has worked with some of cinema's leading directors, including the Coen Brothers, Wim Wenders, Costa Gavras, Jim Jarmusch, Ken Loach, John Boorman, David Cronenberg and Bryan Singer.  He has starred in more than 80 feature films including Excalibur, Miller's Crossing, Into the West, The Point of No Return, Little Women, Spider, The Usual Suspects, Dead Man, The End of Violence, The Man in the Iron Mask, Vanity Fair, Jindabyne and Wah-Wah. On Broadway, he received a Tony Award nomination for his performance in Eugene O'Neill's A Moon for the Misbegotten.  He won the Outer Critics Circle Award for Best Actor for his performance in another O'Neill play, A Touch of the Poet.  In 2016, he starred opposite Jessica Lange in O'Neill's Long Day's Journey Into Night.  For his performance as James Tyrone, Gabriel received Best Actor nominations from the Tony Awards and Outer Critics Circle. His television credits include Vikings, Quirke, Secret State (Channel 4) and Weapons of Mass Distraction (HBO).  He was nominated for Outstanding Lead Actor in a Drama Series for In Treatment at the 60th and 61st Emmy Awards.  In 2008, he received a Golden Globe for Best Performance by an Actor in a Drama Series for the same role. In 2019, Byrne was honored by IFTA with a Lifetime Achievement Award.  In 2021, he received the IFTA Best Actor Award for his latest film, Death of a Ladies’ Man.

LONNY PRICE has directed many Broadway productions including, Sunset Boulevard, Lady Day at Emerson’s Bar and Grill, 110 in the Shade, Master Harold... and the Boys, Sally Marr and Her Escorts (co-written with Joan Rivers and Erin Sanders), Urban Cowboy, A Class Act (Tony Award nominated for Best Book of a Musical, co-written with Linda Kline), and Scotland PA, which had its world premiere at Roundabout Theatre Company’s Laura Pels Theatre in 2019. West End credits include Lady Day at Emerson’s Bar and Grill, as well as Carousel, Sunset Boulevard, Sweeney Todd and Man of La Mancha, all for English National Opera. Film and television credits include his film version of the New York Philharmonic’s Sweeney Todd and Company.  He also directed the stage and filmed versions of his tribute to Stephen Sondheim, Sondheim: The Birthday Concert! (Emmy Award).  Other Philharmonic collaborations include the ‘Live From Lincoln Center’ broadcast of Camelot, Candide, Sweeney Todd (Emmy Award), and Sondheim’s Passion (Emmy Award).  Additional television credits include Lady Day at Emerson’s Bar and Grill for HBO, as well as episodes of 2 Broke Girls, Desperate Housewives and The Jack and Triumph Show.  For his first feature, Master Harold ... and the Boys, he received a Best Director Award from the New York International Independent Film and Video Festival. His documentary, Best Worst Thing That Ever Could Have Happened premiered at the New York Film Festival and was named one of New York Times’ Top 10 Films of 2016, and his other documentary Hal Prince: The Director’s Life (PBS) was also released to critical acclaim.

PRAISE FOR ‘WALKING WITH GHOSTS’

Byrne is a BEAUTIFUL writer … a WONDERFUL physical comedian

It is a meditation on childhood, a study of loss, a paean to purpose, a contemplation of fame, a dream of return, a deliberation on the disappearance of time.  Oh, and it’s funny too.  And heartbreakingly tender.  And pertinent to the moment we are in.