Full Cast Annnounced for the Broadway Engagement of THE LIGHTNING THIEF 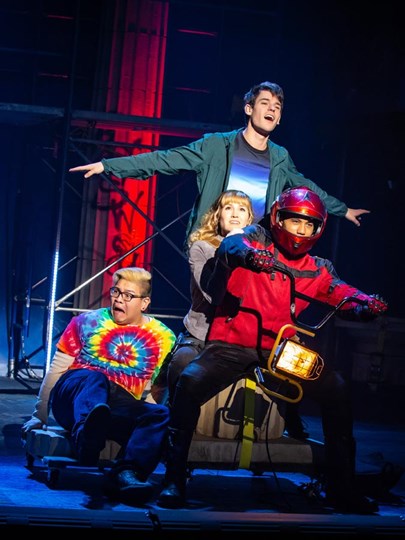 The Limited Broadway Engagement of

TheaterWorksUSA and Martian Entertainment are pleased to announce the ten actors who will bring The Lightning Thief: The Percy Jackson Musical to Broadway this fall, beginning performances Friday, September 20 ahead of a Wednesday, October 16 opening night at the Longacre Theatre (220 W. 48th Street) in a strictly limited 16-week holiday engagement.

As a son of Poseidon, Percy Jackson has newly discovered powers he can’t control, monsters on his trail, and is on a quest to find Zeus’ lightning bolt to prevent a war between the Greek gods. Based on the bestselling novel by Rick Riordan and featuring a thrilling original rock score, with an onstage company of seven playing more than 47 characters, The Lightning Thief is an action-packed theatrical adventure about accepting that normal is a myth and embracing the superpowers inside all of us.

The original TheaterWorksUSA musical production of The Lightning Thief: The Percy Jackson Musical debuted in spring 2017 at the Lucille Lortel Theater in New York City with a sold-out, six-week run which was nominated for three Drama Desk Awards including Outstanding Musical. The Original Cast Recording, available from Broadway Records [and available on Spotify], was released in June 2017 and soon hit #1 on iTunes’ soundtrack chart. A subsequent North American First National Tour launched in Chicago in January 2019 and concluded successfully last month at Boston’s Huntington Theatre Company.

The Lightning Thief has a book by Joe Tracz (Netflix’s A Series of Unfortunate Events, Be More Chill), music and lyrics by Rob Rokicki (Broadway debut), and is directed by Stephen Brackett (A Strange Loop, Fall Springs, Be More Chill), with choreography by Patrick McCollum (The Band’s Visit), with set design by Lee Savage (Satchmo at the Waldorf), costume design by Sydney Maresca (Hand to God), lighting design by David Lander (Torch Song), sound design by Ryan Rumery (Be More Chill, Fool for Love), puppet design by AchesonWalsh (On the Town), fight direction by Rod Kinter (Red Roses, Green Gold), hair, wigs, and makeup design by Dave Bova (Bandstand), and orchestrations by Wiley DeWeese (First Daughter Suite, Preludes) and Rob Rokicki. The production is being presented by special arrangement with Rick Riordan and the Gallt & Zacker Literary Agency.

SARAH BETH PFEIFER (Clarisse and others, u/s Annabeth). Broadway debut! SB is so excited to be bringing this show to Broadway after appearing in this past year’s national tour, the 2017 off-Broadway production, and workshops dating back to 2014. When not hanging out at Camp Half Blood, she is a voice over artist and member of the Constellation Chor. @itsmesbp.

JAMES HAYDEN RODRIGUEZ (Luke and others) is ecstatic to be making his Broadway debut! James originated this role Off-Broadway, brought it to fans around North America in the First National Tour, and can’t wait to electrify audiences on Broadway. Favorite credits: The Visitor (The Public Theater), Man of La Mancha (Shakespeare Theatre Company), Hairspray (Signature Theatre). TV: “Conan @ The Apollo.” jameshaydenrodriguez.com @james_haydn

KRISTIN STOKES (Annabeth) takes great pride in making her Broadway debut having been with The Lightning Thief since its first workshop, both Off-Broadway runs (Lortel nomination, Original Cast Recording), and the National Tour. Other credits include The Ballad of Little Jo (Kate *OCR) at Two River Theatre; Agent 355 (Anna/Simco) at the Musical Theatre Factory; Fly By Night (Miriam) at the Dallas Theatre Center; and most recently Miller and Tyson’s Revival (Lena Hanson) at TheatreWorks Silicon Valley.

SAM LEICHT (u/s Percy, Luke) is thrilled to be making his Broadway debut in The Lightning Thief! A proud Baldwin Wallace University alum, Sam is passionate about making fitness accessible for all. Instagram: @leichtning.