For 'The Humans,' Home Is Where the Set Moves 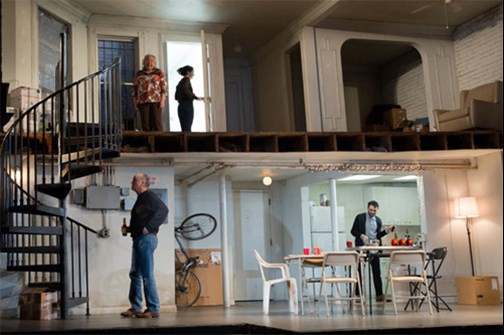 For 'The Humans,' Home Is Where the Set Moves

There goes the neighborhood.

The shabby, no-light, duplex apartment that is home to the “The Humans,” this year’s Tony winner for best new play, is moving uptown.

Well, one block up.

It’s been an unexpected tour of Midtown for the deceptively simple set — which, with its cleft walls, raked floors and embedded speakers emitting anxiety-provoking sounds, won this year’s Tony Award for best scenic design.

David Zinn designed it for the 420-seat Laura Pels Theater, an Off Broadway venue run by the nonprofit Roundabout Theater Company on West 46th Street. It then moved to the 576-seat Helen Hayes Theater, a Broadway house owned by the nonprofit Second Stage Theater company on West 44th Street, and now to the 1,031-seat Gerald Schoenfeld Theatre, owned by the Shubert Organization on West 45th Street.