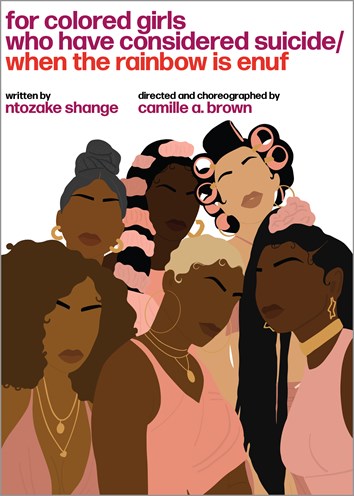 DIRECTED AND CHOREOGRAPHED BY

“A MASTERPIECE! A TURNING-POINT FOR ART BY AND ABOUT BLACK WOMEN.” – Essence

NEW YORK (November 15, 2021) The fully reimagined production of For Colored Girls..., directed and choreographed by Tony Award nominee Camille A. Brown (Once On This Island, Choir Boy, Fire Shut Up in My Bones - Metropolitan Opera Fall 2021), begins performances at Broadway’s Booth Theatre (222 West 45th Street), home to the original 1976 production, on Friday, March 4, 2022, with the opening night set for Thursday, March 24th, 2022. Casting will be announced at a later date.

“Of all the shows to be given as an opportunity to debut as a first-time Broadway director and choreographer, for colored girls… feels like a gift,” said Brown. “I’m thrilled that I’ve been entrusted to combine all the parts of myself — dance, music and theater arts — to shape and share this timeless story again with the world.”

Black girl magic is reborn. Ntozake Shange’s for colored girls who have considered suicide/ when the rainbow is enuf is the “landmark of American theater” (The New York Times) that blazed a trail for generations to come. Now, this celebration of the power of Black womanhood returns to Broadway for the first time, reinvented, directed, and choreographed by “a true superstar of theater and dance” (NPR), Tony Award nominee Camille A. Brown. And her vision is as fearlessly new as it is fiercely now.

Join the circle as seven women share their stories and find strength in each other’s humor and passion through a fusion of poetry, dance, music, and song that explodes off the stage and resonates with all. It’s time for joy. It’s time for sisterhood. It’s time for colored girls.

CAMILLE A. BROWN (director & choreographer) is a prolific Black female director / choreographer, who has received numerous honors including a Guggenheim Award, Bessie Award, Jacob’s Pillow Dance Award, Doris Duke Artist Award, United States Artists Award, two Audelco Awards, five Princess Grace Awards, and a New York City Center Award. She has received a Tony nomination, three Drama Desk nominations, three Lortel nominations and an Obie award for her work in theater. She is an Emerson Collective fellow, a TED fellow and the recipient of a Ford Foundation Art of Change Fellowship. Brown is the 2021 Distinguished Artist, presented by The International Society for the Performing Arts.

Broadway and off-Broadway credits include: Choir Boy, Once On This Island, Toni Stone, A Streetcar Named Desire, Much Ado About Nothing, for colored girls... Film/Television: Academy Award-winning Ma Rainey's Black Bottom, Emmy Award-winning “Jesus Christ Superstar Live.” Ms. Brown choreographed the critically acclaimed Porgy and Bess for The Metropolitan Opera and this September became the first Black woman director for the main stage at the MET with Fire Shut Up In My Bones. Brown is the founder and Artistic Director of Camille A. Brown & Dancers.