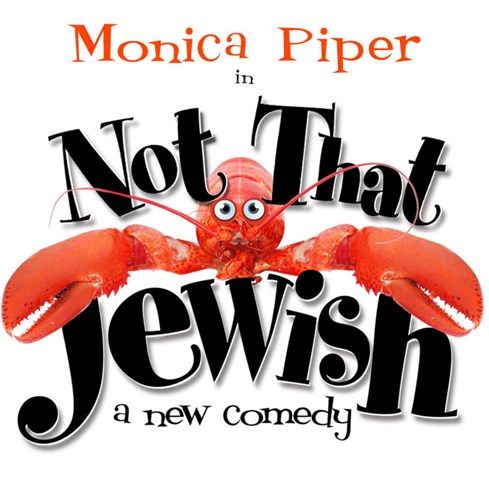 Michael Alden Productions is proud to announce the New York premiere of NOT THAT JEWISH, written and performed by Emmy Award-winning and Golden Globe nominated writer and comedian Monica Piper (Writer of Roseanne, Mad About You, Rugrats) and directed by Mark Waldrop (Howard Crabtree's When Pigs Fly, Bea Arthur on Broadway: Just Between Friends). The first preview performance will be October 6, 2016, with an official opening on October 23 and running through January 2017 at New World Stages (340 W 50th St, New York, NY 10019).

NOT THAT JEWISH is Emmy Award-winning writer, actress and comedian Monica Piper’s autobiographical telling of a Jew…’ish’ girl’s life. From growing up in a show business family in the Bronx and taking her first step on to a comedy club stage, to a WASP wedding and an “almost” night with Mickey Mantle, Piper shares the milestones and moments that shaped her life, using the same signature wit found in her writing on Roseanne and Mad About You and her Emmy Award winning work on Rugrats. Over the course of 80 minutes, the audience travels with Piper from innocence to individuality, reliant to resilient, sharing both the hilarity and the heartache along the way.

Monica Piper began her career studying improv with Second City in Chicago, and performed with “Sons of the Sunset,” and “Papaya Juice” in San Francisco, before going solo as a stand up and becoming one of Showtime Network’s “Comedy All Stars.” Her Ace Award-winning Showtime Special, “No, Monica… Just You” was nominated for an American Comedy Award. Piper went on to write for Roseanne, Mad About You and Veronica’s Closet, eventually becoming the showrunner of the #1 children’s animated series, Rugrats, for which she won an Emmy.

NOT THAT JEWISH is directed by Mark Waldrop, and features set design by Michael Carnahan, lighting design by Julie Duro, sound design by Ian Wehrle, and projection design by Zachary G. Borovay.

American Express® Card Members can purchase tickets before the general public beginning Monday, August 29 at 10am (EST) through Thursday, September 1 at 9:59am (EST).

Audience Rewards members can purchase tickets before the general public beginning Thursday, September 1 at 10am (EST) through Monday, September 5. Audience Rewards® is the Official Rewards Program of Broadway & the Arts™. It’s a standing ovation for ticket buyers across the nation. Earn valuable ShowPoints every time you buy tickets to participating theatrical productions, live entertainment, and more. Save money by redeeming ShowPoints for free tickets to the events you love or, even better, securing unique experiences and merchandise exclusively curated for Audience Rewards® members. It’s free and fast to join at www.AudienceRewards.com.

Tickets will go on sale to the general public on Tuesday, September 6 at midnight.

NOT THAT JEWISH was originally commissioned by the Jewish Women’s Theatre (JWT) in Santa Monica, CA, where it premiered in their performance and art space, The Braid, in November of 2014. The show played for 16 months, and in 2016, Ms. Piper was nominated for the Los Angeles Drama Critics Circle Award for Best Solo Performance.

"Don’t miss this one! Flawless production...sparkles throughout with comedy."
LA SPLASH

“Turning adversity into comedy and idiocy into irony, she presents her life with no holds barred, and, despite the vexations, she appears to have enjoyed every minute of it. And so will you.”
SANTA MONICA DAILY PRESS

MONICA PIPER (Playwright and Performer) was a Campfire Girl… in the Bronx. “You sense your life isn’t normal when you’re sitting on the D train with a bag of marshmallows and a twig.” Monica began her career as a high school English teacher. While finding it rewarding, she realized her pas­sion was making people laugh. She studied improv with Second City in Chicago, and performed with “Sons of the Sunset,” and “Papaya Juice” in San Francisco. Monica then went solo as a stand up and soon became one of Showtime Network’s “Comedy All Stars.” It wasn’t long before she landed her own Ace Award-winning Show­time Special, “No, Monica… Just You,” and was nominated for an American Comedy Award as one of the top five female comedians in the country. Monica was recruited by Ms. Barr herself to write on Roseanne. Thus began her career as a sit-com writer. She went on to write for Mad About You and Veronica’s Closet. Now a mother, sit-com hours meant too much time away from her son, so Monica turned to animation. After writing for the adult cult favorite, Duckman, she became the showrunner of the #1 children’s animated series, Rugrats, for which she won an Emmy. She went on to develop and write series for Nickelodeon, Disney and Cartoon Network. Monica has returned to her first love, performing. As a stand-up, she’s the headlining entertainer for organizations around the country. Her most recent include fundraising dinners for the City of Hope, the Jewish Federation, The National Alliance on Mental Illness, The Premiere Oncology Foundation, as well as Jewish groups nationwide. An artist-in-residence with the Jewish Women’s Theatre, Monica performs original pieces for their acclaimed At-Home Salon Theatre. She is eternally grateful to the JWT and a special patron for commissioning her one-woman show, “Not That Jewish.” Monica lives in Santa Monica with her son, Jake, whom she loves and adores almost every day.

MICHAEL CARNAHAN (Set Designer). Michael Carnahan is an award winning scenic designer working in theater, musical theater, opera, and live events. His recent works include the New York premiere of Skeleton Crew at the Atlantic Theatre Company, I and You at 59E59, The Happiest Song Plays Last at Second Stage, the acclaimed Signature Theatre revival of August Wilson’s The Piano Lesson, and The Marvelous Wonderettes. He has collaborated with directors such as Joel Grey, Ruben Santiago-Hudson, Charles Randolph-Wright, Christopher Ashley, Neil Pepe, Roger Bean, Austin Pendleton, among many others. His regional work includes designs at Two River Theatre, Center Stage, Musical Theatre West, Ogunquit Playhouse, Forestburgh Playhouse, Utah Shakespeare Festival, Pasadena Playhouse, ACT, the McCarter Theatre and the Williamstown Theatre Festival. He is also a busy associate designer on Broadway with credits including Kinky Boots, Ann, Cyrano de Bergerac, Peter and the Starcatcher (Tony Award), Wonderland, The Importance of Being Ernest, Bloody Bloody Andrew Jackson, All About Me, Irving Berlin’s White Christmas, Curtains, and Steel Magnolias. Michael has won numerous awards and nominations for his design work. He is a graduate of the Savannah College of Art & Design and the University of Illinois Champaign-Urbana.

IAN WEHRLE (Sound Designer) is a composer and collaborator for various music direction and sound design for theater. Recent credits include: Charles Messina's A Room Of My Own and Cut Throat (Abingdon Theatre Co.); A Dream of Red Pavilions, Sayonara and No No Boy (Pan Asian Repertory Theatre Co.); Gilgamesh - A Musical Epic (Columbia Stages); Carousel, Cabaret and Chess (New York Film Academy); Regular work with Blogologues: The Internet Performed, Sarah Lawrence College, Mill Mountain Theatre; and is a professor of Sound Design at CUNY's KCC. He is credited at the Food Network, MTV, and PBS. For more information please see: www.soundaffectsdesign.com.

MICHAEL ALDEN (Producer). Broadway: Disgraced (Pulitzer Prize 2013), Grey Gardens the Musical (Ten Tony nominations including Best Musical), Bridge & Tunnel on Broadway, by and with Sarah Jones (2006 Special Tony Award). West End: The King’s Speech at the Wyndham’s theatre, the multi-award-winning Bat Boy the Musical at the Shaftesbury Theatre. Off-Broadway: Becoming Dr. Ruth at The Westside Theater; Spalding Gray: Stories Left to Tell at the Minetta Lane Theatre, Sarah Jones’ Bridge & Tunnel at The Culture Project, Bat Boy the Musical at the Union Square Theater, Save It For The Stage: The Life Of Reilly, written and starring Tony Award winning Charles Nelson Reilly at The Irish Rep. Regional: Theresa Rebeck’s Bad Dates at The Laguna Playhouse directed by Judith Ivey and Palm Beach at The La Jolla Playhouse directed by Des McAnuff. Films: Something To Say, Unhinged, From Roosevelt to Reagan, The Rise of Public Enemy (to be directed by Seith Mann) UnZipped, Just Cause, The Zookeeper, and Kissing Jessica Stein.

RONDA SPINAK (Producer) co-founded and serves as the artistic director of Jewish Women’s Theatre (JWT), a Los Angeles based nonprofit company. In her tenure at JWT, she created and produces the At-Homes Salon Theatre Series. She opened a new performance and art space, The Braid, bringing new works to the JWT subscribers. She has curated and originated more than 24 original themed salon shows for JWT, as well as adapted many of the pieces performed. She commissioned and developed NOT THAT JEWISH for JWT. She is the driving force behind collecting the stories of women rabbis worldwide and putting them on stage. JWT has partnered with Jewish Women’s Archive to make the stories of women rabbis accessible on the internet. She graduated from Stanford University, and completed her MBA at UCLA and her Masters in writing at USC. Spinak has taught creative writing, served as a grant reviewer for the Los Angeles County Arts Commission, produced theater in LA, and is on the board of the Association for Jewish Theatres. She is a member of the Dramatists Guild.

MARCIA SELIGSON (Producer). Broadway: Six Dance Lessons in Six Weeks in 2003 after a long running engagement at the Geffen Theatre in Los Angeles starring Uta Hagen and David Hyde Pierce. The play opened in London’s West End in 2006 followed by the 2015 film adaptation starring Gena Rowlands, Cheyenne Jackson, and Rita Moreno. Marcia is the Founder and Producing Artistic Director of REPRISE! BROADWAY'S BEST, the nationally acclaimed regional theatre company in Los Angeles. During her tenure, she produced over forty shows, staged readings, concerts, special events and benefits. Marcia created and serves as the Co-Executive Producer of THE FOUNDATION OF NEW AMERICAN MUSICALS, now in its 10th year, bringing musical theatre creation into high schools and colleges in Southern California. An award-winning journalist and author, Marcia has eight published books, and has penned articles for virtually every major magazine in America.

JEWISH WOMEN’S THEATRE (Developmental Producer). Since 2008, Jewish Women’s Theatre (JWT) has been redefining Jewish theater, one story at a time – creating new, relevant and personal Jewish content performed in unconventional and changing locations. Combining the lost heritage of Jewish salon culture and the proud tradition of storytelling, JWT presents unique “salon style” theatrical experiences resulting in an alternative portal to Judaism, allowing audience and artist to explore and engage in Jewish life in a culturally meaningful way that strengthens Jewish identity and community while creating a legacy for future generations.