Discover How the Tinman Lost His Heart at New World Stages 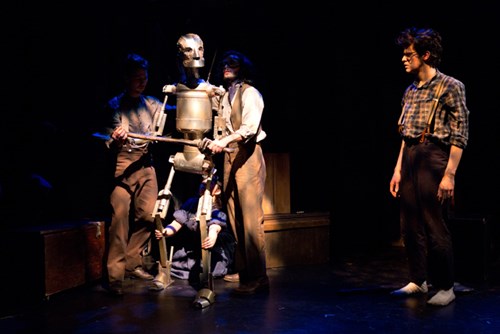 Discover how the Tinman lost his heart.
THE WOODSMAN

“The spectacle is handmade, infused with breath and light.” – The New York Times

“The Woodsman is a grown-up fairy tale that proves happiness is a worthwhile goal, even if it doesn’t last ever after.” – Time Out New York

Based on the beloved writings of L. Frank Baum, The Woodsman tells the origin story of the Tin Woodsman, the woman he loved, and the witch that would stop at nothing to keep them apart. Back by popular demand, Strangemen & Co. brings this hauntingly beautiful Land of Oz to life through spectacular puppetry and original music.

The Woodsman was originally produced and developed by STRANGEMEN & CO.

The Woodsman, a recipient of the 2014 Jim Henson Foundation Grant, was created by Strangemen & Co. and premiered at Brooklyn’s Standard ToyKraft in 2012 followed by a production at the Ars Nova ANT Fest in 2013 before transferring to 59E59 Theaters in January 2014 for a strictly limited 3-week, sold out run.

The Woodsman returned by popular demand for a critically acclaimed strictly limited engagement at 59E59 Theaters in January 2015, making it one of the only shows in the theater’s history to ever make a return engagement.

In its 59E59 Theaters return engagement, The New York Times hailed, “Mr. Ortiz’s puppets are fanciful and gorgeous: the witch, with her pinched face and dowager’s gown; the crows, whose wings in motion are all taffeta susurration; a fabulous golden-eyed monster, a cross between a tiger and a bear. (Oh, my.),” and The Huffington Post called The Woodsman “A winner! Clever pure theater.” A Time Out New York Critic’s Pick, The Woodsman was praised “as a grown-up fairy tale that proves happiness is a worthwhile goal, even if it doesn’t last ever after.”