Daniel Craig and Ruth Negga to Star in MACBETH on Broadway 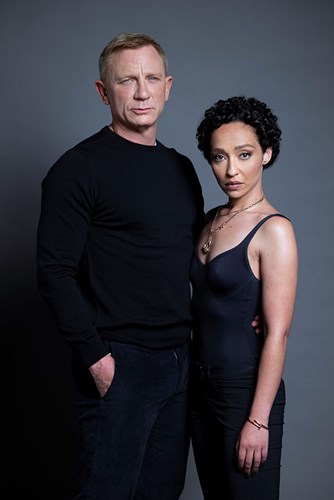 TO STAR IN UPCOMING BROADWAY PRODUCTION OF

(New York, NY) DANIEL CRAIG will return to Broadway as Macbeth and RUTH NEGGA will make her Broadway debut as Lady Macbeth in an all-new production of MACBETH on Broadway.

"Daniel is not only a great film actor but a magnificent theatre actor as well. I am thrilled that he will be supporting the return of Broadway playing this iconic role with the exquisitely talented Ruth Negga making her Broadway debut and under the expert direction of Sam Gold,” said producer Barbara Broccoli.

“I am beyond thrilled to be participating in this historic season as theatre re-emerges, and to be working with two such masterful actors on one of dramatic literature’s most challenging and epic dramas,” said director Sam Gold. “I can’t wait to get started!”

A tale of malice, matrimony and murder, MACBETH tells the story of one couple’s obsession with power—and their guilt after doing the unthinkable. For 15 weeks only, this thrilling new production will capture the passion and ferocity of Shakespeare’s most haunting text like never before.

As a proud partner of MACBETH, American Express® Card Members have access to exclusive presale tickets before the general public beginning Wednesday, September 29 at 11:00AM (EDT) through Wednesday, October 6 at 9:59AM (EDT) at www.Telecharge.com.

Presale tickets for MACBETH will be available exclusively to Audience Rewards® members from Wednesday, October 6 at 10:00AM (EDT) through Friday, October 8 at 9:59AM (EDT) at www.AudienceRewards.com.

Tickets will go on sale to the general public at www.Telecharge.com. beginning Friday, October 8 at 10AM (EDT).

Audience Rewards® is the Official Rewards Program of Broadway & the Arts™. It’s a standing ovation for ticket buyers across the nation. Earn valuable ShowPoints every time you buy tickets to participating theatrical productions, live entertainment, and more. Save money by redeeming ShowPoints for free tickets to the events you love or, even better, securing unique experiences and merchandise exclusively curated for Audience Rewards® members.

DANIEL CRAIG (Macbeth) is hailed as one of the finest actors of his generation on stage, screen, and television. Craig was most recently seen on screen in Rian Johnson’s Knives Out, for which his standout performance earned him a Golden Globe nomination. He will reprise his role in the upcoming sequel. Other notable film credits include Munich, Layer Cake, Road To Perdition, The Girl with the Dragon Tattoo amongst others, and he returns to the role of ‘James Bond’ for the fifth and final time this fall in No Time To Die, after previously starring as ‘Bond’ in Spectre, Quantum of Solace, Casino Royale and the critically acclaimed box office smash Skyfall.

Craig is also an accomplished stage actor and in 2013 starred in the critically acclaimed Broadway show Betrayal opposite Rafe Spall and Rachel Weisz directed by Mike Nichols. Craig’s most recent theatre venture was the 2016 off-Broadway production of Othello alongside David Oyelowo and directed by Sam Gold. In 2009 Daniel starred in a twelve-week Broadway run of A Steady Rain. Craig played opposite Hugh Jackman in this contemporary American play. Craig’s other theatre credits include leading roles in Hurlyburly with the Peter Hall Company at the Old Vic, Angels in America at The National Theatre and A Number at the Royal Court alongside Michael Gambon.

RUTH NEGGA (Lady Macbeth) is a versatile actress with a body of work spanning award-winning theatre, big screen historical dramas, independent films and innovative television series. This fall, Ruth will star in Rebecca Hall’s Passing, opposite Tessa Thompson on Netflix. Ruth will next lens the titular role of the drama series Josephine, which follows the remarkable story of Josephine Baker, one of the most legendary Jazz performers and civil rights activists of the twentieth century. Ruth will also executive produce the project. Ruth’s most notable film roles include ‘Mildred Loving’ in Jeff Nichols’ Loving, for which she received Academy Award®, Golden Globe® and Critics Choice Award® nominations, Ad Astra, Warcraft, Una Vida, All Is By My Side, Noble, World War Z, The Samaritan and Breakfast on Pluto. Her television credits include ‘Tulip O’Hare’ in AMC’s “Preacher,”  “Mother,” “The Money,” “Agents of S.H.I.E.L.D.,” “Misfits,” “Love/Hate,” the BBC mini-series “Five Daughters,” and “Shirley.”

Outside of her roles on screen, Ruth still maintains a strong connection to theatre. In 2020, she made her New York City theatrical debut in the titular role of Hamlet at St. Ann’s Warehouse for which she received a Drama Desk Award nomination. This performance followed an acclaimed run at The Gate Theatre in Dublin. Ruth’s extensive and award-winning theatre production credits include Lolita as her stage debut for Corn Exchange Theatre Company at the Abbey Theatre; Duck for Out of Joint and The Royal Court Theatre, for which she was nominated for an Olivier best newcomer; Playboy of the Western World at The Old Vic; Hamlet as the role of ‘Ophelia’ at the National Theatre; Phèdre at the National Theatre, for which she won the Ian Charleson Award; Oedipus Loves You at Peter Pan Theatre; Lay Me Down Softly, The Crucible, The Bacchae, Burial At Thebes, all at the Abbey Theatre; and Titus Andronicus at The Project Theatre, for which she received the Irish Times Award for Best Actress. Ruth was born in Addis Ababa, Ethiopia, and was raised between there, Limerick, Ireland, and London, England.

CHRISTINE JONES (Scenic Design) is a multidisciplinary artist working in theatre, opera, fashion, public art, and the digital realm. She is the Creator and Artistic Director of the critically acclaimed THEATRE FOR ONE. She is a director of one-of-a-kind experiences for companies like Rag & Bone and productions such as Queen of the Night, (Drama Desk Award for Best Unique Experience). She is a Tony and Olivier Award-winning Set Designer for Harry Potter and the Cursed Child Pts I & II and also won a Tony for American Idiot. Other credits include The Cher Show, Spring Awakening (Tony Nomination), and Let the Right One In (St. Ann’s Warehouse and West End). Opera designs include La Traviata and Rigoletto (MET). Currently, she is developing a digital art exhibition with Radiohead, as well as co-designing with Brett Banakis a musical adaptation of The Devil Wears Prada with music by Elton John. During the pandemic she conceived and directed  SOCIAL! Distance Dance Club, with Steven Hoggett and David Byrne which became the first post pandemic production at The Armory. She has an Obie for Sustained Excellence in Design and teaches at NYU’s TISCH, as well as at Princeton.

JANE COX (Lighting Design) Lighting designer for theatre, dance and opera. Broadway credits include True West, King Lear, Jitney, Machinal, Amelie, The Color Purple.  Other recent NYC theatre includes The Secret Life of Bees, Assassins and Fefu. Jane has also designed for the Barbican Theater, Sydney Opera House and San Francisco Opera and is a member of the Monica Bill Barnes Dance Company. Jane is a Professor of the Practice and Director of the Theater Program at Princeton University.

GAELYNN LEA (Original Music) won NPR Music’s Tiny Desk Contest in 2016. Since then she has played over 600 shows in 45 states and 9 countries, captivating audiences with her unique mix of haunting original songs and traditional fiddle tunes. Gaelynn Lea has performed in both SXSW and the Winnipeg Folk Festival and she’s opened for bands LOW, Wilco and The Decemberists.

JEREMY CHERNICK (Special Effects Design) has worked with Disney Theatrical Group creating effects for Frozen, Aladdin, Beauty and the Beast, Hunchback of Notre Dame, and Tarzan. Jeremy has worked on over 50 Broadway productions, including West Side Story, Beetlejuice, Hadestown and Oklahoma. In London’s West End, Jeremy designed Harry Potter and the Cursed Child, and Let the Right One In. Jeremy’s work has been featured in prominent performing and visual arts institutions across the globe. In 2018, Jeremy was an Emmy Award honoree for his work on NBC’s “Jesus Christ Superstar Live.” Jeremy serves as Head designer for J&M Special Effects in Brooklyn www.jmfx.net.

DAVID LEONG (Fight Direction) has worked on over 300 plays and musicals for Broadway, the New York Metropolitan Opera, London’s West End, the National Theatre of London and regional theatres across the United States. Recent NYC credits include Porgy and Bess, Fool for Love and Amazing Grace the Musical.

AYANNA THOMPSON (Text Consultant) is a Regents Professor of English at Arizona State University. She is the author of numerous books about Shakespeare, race, and performance. In 2020, she became a Shakespeare Scholar in Residence at The Public Theater in New York, and in 2021, Thompson was appointed to the board of trustees of the Royal Shakespeare Company.

BARBARA BROCCOLI (Producer) is producer of the James Bond film series with her brother Michael G. Wilson. Together with Wilson, Broccoli produced the hugely successful GoldenEye, followed by the next eight Bond films including Skyfall, Spectre and No Time To Die. Through her independent production company, Astoria Productions, Broccoli produced Crime Of The Century for HBO. Together, Broccoli and Wilson have produced and executive produced several independent film projects including: The Rhythm Section, The Silent Storm, Radiator and Nancy. Broccoli also executive produced Trauma Is A Time Machine and produced the critically acclaimed Film Stars Don’t Die In Liverpool with Wilson executive producing.  Recently Broccoli executive produced the upcoming BBC Film and BFI backed Ear for Eye, directed by debbie tucker green. Broccoli is currently in production on Till starring Whoopi Goldberg and directed by Chinonye Chukwu.

THE SHUBERT ORGANIZATION (Producer) is America’s oldest professional theatre company and the largest theatre owner on Broadway. For over 120 years, the company has been at the forefront of the American theatre. Under the leadership of Chairman and CEO Robert E. Wankel, Shubert owns and operates 17 Broadway theatres, six Off-Broadway venues and the Forrest Theatre in Philadelphia. The company has produced and co-produced hundreds of plays and musicals including Cats, Sunday in the Park with George, Dreamgirls, The Heidi Chronicles, Jerome Robbins' Broadway, Amadeus, Children of a Lesser God, The Grapes of Wrath, Ain’t Misbehavin’, Hedwig and the Angry Inch, Spamalot, The Elephant Man, The Curious Incident of the Dog in the Night-Time and School of Rock. Broadway shows from the current season include Come From Away, Company, Dear Evan Hansen, Diana the Musical, The Lehman Trilogy, Is This A Room, Dana H and Thoughts of a Colored Man. Alongside Neil Meron, Shubert is a lead producer of the new musical Some Like It Hot.

Wilson is a leading expert on 19th -century photography. He and his wife Jane Wilson, founded The Wilson Centre for Photography – a facility for research on the history, aesthetics and preservation of photographs.  Wilson is Honorary Vice President of the Science Museum Foundation, a Fellow of the Science Museum London and a Trustee for the Carnegie Institution for Science, Harvey Mudd College and Santa Barbara Museum of Art. Wilson and Broccoli are Directors of the Dana and Albert R Broccoli Foundation. Wilson and Broccoli are founders of the London Screen Academy (LSA) for which Wilson also serves as the Vice Chair of the Board of Trustees, Day One Trust. During the production of No Time To Die, Wilson and Broccoli created a dedicated apprenticeship scheme which gave twenty one young people from a range of backgrounds the opportunity to work as paid trainees on the film.

FREDERICK ZOLLO (Producer) has produced over one hundred plays in New York, London and on tour. He’s a 21-time Tony nominee, winning the award seven times for such productions as Hurlyburly, Ma Rainey’s Black Bottom, Angels in America, Once, The Band’s Visit, Les Liasons Dangereuse, Glengarry Glen Ross, On Golden Pond, The Farnsworth Invention, Oleana, A Steady Rain, The Goat, King Hedley III, among many others. He has produced two dozen films including Oscar nominees Mississippi Burning, The Paper, Quiz Show, Ghosts of Mississippi, among others. Currently, he and Barbara Broccoli are producing Till, about the 1955 heinous murder of Emmett Till, which sparked the Civil Rights Movement.