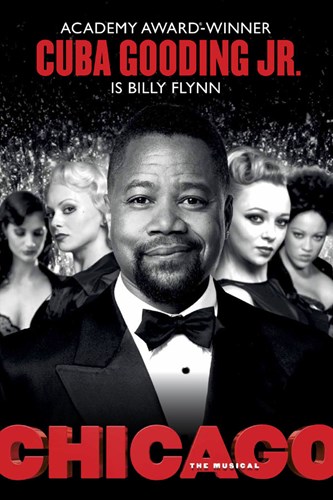 Cuba Gooding Jr. reprises his role as “Billy Flynn” after recently playing the role on Broadway from Oct. 6 - Nov. 18, 2018. He originated the part (in his West End stage debut) earlier this year in the 2018 London production of Chicago, currently playing at the Phoenix Theatre.

Cuba Gooding Jr. made his directorial debut and starred in the independent film Bayou Caviar (which he also co-wrote) in October 2018. Gooding Jr.’s breakthrough role was as Tre Styles in the feature film Boyz n the Hood (1991), followed by A Few Good Men (1992), before winning the Academy Award for Best Supporting Actor in Jerry Maguire (1996). Later films included As Good as It Gets (1997), Men of Honor (2000) as Carl Brashear, Pearl Harbor (2001) as Doris Miller, American Gangster (2007), The Butler (2013) and Selma (2014), playing civil rights attorney Fred Gray. In 2016, he portrayed O.J. Simpson in the F/X drama series “The People v. O. J. Simpson: American Crime Story,” for which he received a Primetime Emmy Award nomination for Outstanding Lead Actor in a Mini-series or a Movie. In 2013, he made his Broadway debut alongside Cicely Tyson and Vanessa Williams in the Tony Award-nominated production of The Trip to Bountiful.