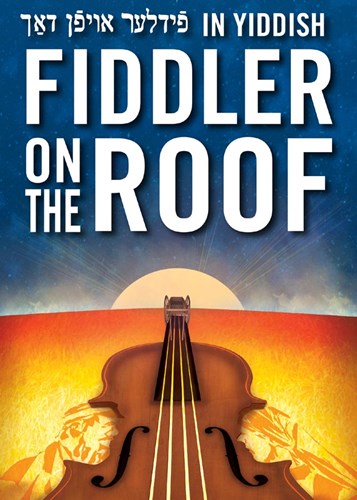 “FIDDLER ON THE ROOF”

WILL TRANSFER UPTOWN TO STAGE 42

National Yiddish Theatre Folksbiene (NYTF) production of Fiddler on the Roof will transfer uptown to off-Broadway’s Stage 42 (422 W 42nd St.) this winter. The Yiddish language production will begin previews on Monday, February 11, 2019 and open officially on Thursday, February 21, 2019. The unprecedented success of the production which is currently being presented off-Broadway by NYTF at the Museum of Jewish Heritage (36 Battery Place), extended four times since it began performances there on July 4, 2018. The show is currently running at the Museum through December 30, 2018, following which it will move uptown.

Directed by Academy® Award-and-Tony® Award winner Joel Grey, Fiddler on the Roof will star Broadway veteran Steven Skybell reprising his role as “Tevye” and Emmy® Award nominee and Theatre World Award winner Jackie Hoffman reprising her role as “Yente”. Further news about casting for the transfer as well as ticketing information will be announced at a later date.

This Yiddish version of Fiddler – which is accompanied with English and Russian supertitles – had never been staged in the United States until this production was presented at NYTF and this transfer marks its official off-Broadway debut. The story of Fiddler on the Roof is based originally on the Tevye the Dairyman vignettes by Sholem Aleichem. The Yiddish translation, originally performed in Israel in 1965, was artfully crafted by Shraga Friedman, a renown Israeli actor/director just one year after the Broadway debut of Fiddler on the Roof. Friedman, a native Yiddish speaker, was born in Warsaw and was able to escape from a war-torn Europe, along with his family, who made their way to Tel Aviv in 1941. Well acquainted with the works of Aleichem, Friedman used his translation to infuse Fiddler with rich literary references to the original Yiddish stories.

One of the most celebrated musicals of all time, Fiddler on The Roof, features music by Jerry Bock, lyrics by Sheldon Harnick, and book by Joseph Stein, with original New York Stage Production directed and choreographed by Jerome Robbins.

The original Broadway production of the show, which opened in 1964, was the first musical theatre production in history to surpass 3,000 performances; the show won the 1965 Tony Award for Best Musical in addition to eight other Tony Awards that year; and has performed in every metropolitan city in the world from Paris to Beijing.

The Yiddish Fiddler on the Roof received universal praise from critics.

“Fiddler offers a kind of authenticity that no other American Fiddler ever has.”

“A moving triumph and a piercing delight!”

“A thrilling new production in Yiddish”

In a theatre career that was launched in the early 1950’s, Grey’s credits include Chekhov’s The Cherry Orchard (Roundabout); Anything Goes; Wicked; Chicago; George M! (Tony Award nom.); Cabaret (Tony Award). He was Ned Weeks in the Public Theatre’s original off-Broadway production of Larry Kramer’s seminal play, The Normal Heart, in 1986, and co-directed the Tony Award-winning Broadway premiere in 2011. Film credits include Cabaret (Academy Award), Buffalo Bill and the Indians, Remo Williams: The Adventure Begins, Dancer In the Dark, The Seven Percent Solution and many more. Joel is also an internationally exhibited photographer with four published books, Pictures I Had to Take (2003), Looking Hard at Unexamined Things (2006), 1.3 – Images From My Phone (2009), and The Billboard Papers (2013). His work is part of the permanent collection of The Whitney Museum of American Art. His memoir, Master of Ceremonies, was released in 2016 (Flatiron Press). Joel Grey made his professional debut at the age of nine as Pud in the Cleveland Playhouse production of On Borrowed Time.