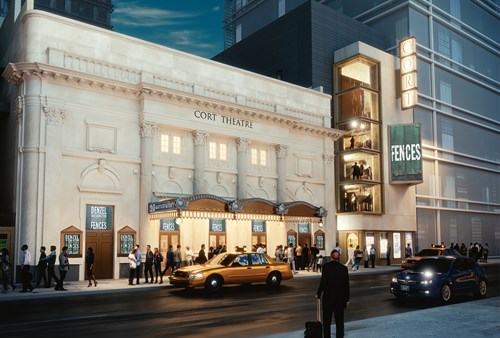 The Shubert Organization is moving forward with a major restoration and expansion project at the Cort Theatre. In addition to historic refurbishments to the interior and rehabilitation of the NYC historic landmark’s façade, the venue will be getting a much-needed 35-foot-wide expansion on its western side.

Unlike the historic main theatre, built in 1912 by architect Thomas Lamb, the new annex by Kostow Greenwood Architects will have a thoroughly modern design. Plans include the addition of new lounges and concession spaces for theatregoers on multiple levels, an available elevator, additional restroom facilities with accessibility in mind, and better traffic flow for patrons. Theatre staff and performers will benefit from new dressing rooms, wardrobe facilities, and rehearsal space.

Designs for improvements to the historic 1912 structure are by architect Francesca Russo, who has worked on nearly all of Shubert’s restoration projects for the past 25 years. Enhanced theatre functionality will allow for the presentation of more modern, technically demanding productions with larger casts; major improvements to the stagehouse include expanded wing space and modernized rigging. There will be no additional capacity added to the auditorium of the intimate landmarked theatre, but the new theatre seating will enhance comfort and accessibility for the audience.

The Cort plans represent Shubert’s first major theatre expansion project in decades. The addition of the annex structure at the Cort allows for a more ambitious renovation project and a chance to truly modernize one of Broadway’s historic theatres.

Built by and named for John Cort, manager of a Seattle theatre circuit with playhouses scattered throughout the western US and British Columbia, the Cort Theatre was acquired by the Shubert brothers in 1927. It is the only surviving theatre on Broadway designed by Thomas Lamb. Its classic exterior was inspired by the Petit Trianon at Versailles, and architecture from the period of Louis XVI inspired the interior. Restoration of the original proscenium arch, featuring back-lit art glass set in ornamental plaster lattice, will be a particularly spectacular feature in bringing back the original décor.