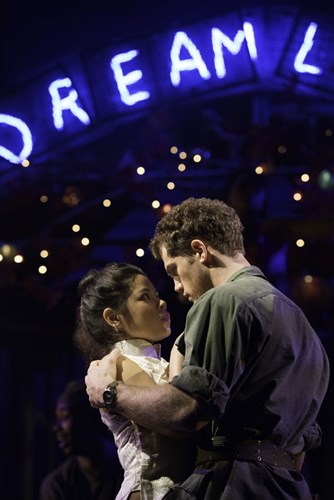 Rehearsals begin Thursday, January 12 for Cameron Mackintosh’s acclaimed new production of Boublil and Schönberg’s legendary musical MISS SAIGON, which will return to its original home, The Broadway Theater (1681 Broadway) beginning performances Wednesday, March 1. The original production of MISS SAIGON opened at the same theater on April 11, 1991 and played there through January 28, 2001.  Directed by Laurence Connor (the recent hit revival of Les Misérables, School of Rock), the Broadway return of MISS SAIGON will feature four of its London stars, Jon Jon Briones as The Engineer, Eva Noblezada as Kim, Alistair Brammer as Chris and Rachelle Ann Go as Gigi.  The cast also includes Katie Rose Clarke as Ellen, Nicholas Christopher as John, Devin Ilaw as Thuy.   Lianah Sta. Ana will play the role of Kim at certain performances.  MISS SAIGON has its official opening Thursday, March 23.  MISS SAIGON will play a limited engagement through January 13, 2018 before launching a North American tour later in the year.

MISS SAIGON has music by Claude-Michel Schönberg with lyrics by Richard Maltby Jr. and Alain Boublil, adapted from original French lyrics by Alain Boublil, with additional lyrics by Michael Mahler. The new production is directed by Laurence Connor with musical staging by Bob Avian and additional choreography by Geoffrey Garratt.  Production design is by Totie Driver and Matt Kinley based on an original concept by Adrian Vaux; costume design by Andreane Neofitou; lighting design by Bruno Poet; sound design by Mick Potter; and projections by Luke Halls.  Orchestrations are by William David Brohn; musical supervision by Stephen Brooker and musical direction by James Moore.  Casting is by Tara Rubin Casting / Merri Sugarman CSA.

MISS SAIGON tells the story of the last days of the Vietnam War, when 17 year-old Kim (Eva Noblezada) is forced to work in a Saigon bar run by a notorious character known as the Engineer (Jon Jon Briones).  There she meets and falls in love with an American GI named Chris (Alistair Brammer) but they are torn apart by the fall of Saigon.  For three years Kim goes on an epic journey of survival to find her way back to Chris, who has no idea he has fathered a son.

The new production of MISS SAIGON opened in London in May 2014 to record-breaking advance sales and critical acclaim. Dominic Cavendish in The Daily Telegraph wrote, “This thrilling new production spills out beyond the theater and speaks directly to the times we live in.  Not only one of the most innovative shows of the last quarter century, but one of the most profound and lasting great musicals of the 20th century.  There is something in the air which means MISS SAIGON is not only right to come back, but it is urgent and necessary that it comes back now.”  Dominic Maxwell in The Times called the production “thrilling, soaring and spectacular.” The reviews for its stars were also raves.  David Benedict in Variety wrote, “In an astonishing stage debut, Eva Noblezada gives a thrilling performance as Kim, with poise, power and a superb voice.”  And Dominic Maxwell in The Times said Jon Jon Briones plays the Engineer with “brilliant, avaricious charm.”

MISS SAIGON The 25th Anniversary Performance was presented at sold-out screenings throughout North America this past September and recently recorded the biggest ever debut for an event cinema release in the UK.  MISS SAIGON: The Definitive Live Recording is available from Universal Music and First Night Records.

MISS SAIGON swept the board at the 2015 Whatsonstage.com Awards winning a record-breaking nine awards, the most awards ever won by a single show in the 15-year history of the awards including: Best West End Show; Best Revival of a Musical; Best Leading Actress in a Musical (Eva Noblezada) and Best Leading Actor in a Musical (Jon Jon Briones).

Since its London world premiere in 1989, Cameron Mackintosh’s production of Alain Boublil and Claude-Michel Schönberg’s epic musical MISS SAIGON has become one of the most successful musicals in history.  The original Broadway production of MISS SAIGON opened on April 11, 1991 with what was the largest advance sale in Broadway history ($37 million).  The show went on to play for nearly ten years and 4,063 performances seen by more than 5.9 million people.   MISS SAIGON has been performed in 28 countries, over 300 cities in 15 different languages, has won over 40 awards including 2 Olivier Awards, 3 Tony Awards, and 4 Drama Desk Awards and been seen by over 35 million people worldwide.

Tickets are available at saigonbroadway.com, and at telecharge.com, or by phone at (212) 239-6200 or (800) 447-7400 and at the Broadway Theatre box office (1681 Broadway between 52nd and 53rd Streets). Tickets range from $39 to $165.  MISS SAIGON will perform Monday through Saturday evenings, with matinees Wednesday and Saturdays.  Visit saigonbroadway.com for exact show times and dates.

Alistair Brammer and Rachelle Ann Go are appearing in MISS SAIGON with the support of Actors’ Equity Association.