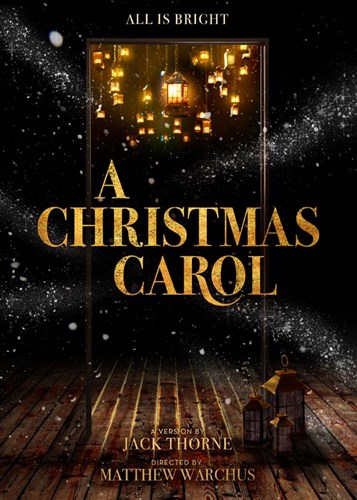 ANDREA MARTIN
as Ghost of Christmas Past

LaCHANZE
as Ghost of Christmas Present

This timeless — and timely — tale of redemption welcomes theatergoers of all ages into an immersive experience that’s brimming with Christmas spirit. It’s “a stunning piece of visual theatre” (Time Out) that features dazzling staging, moving storytelling and 12 of the most cherished Christmas carols, including “Joy to the World,” “Silent Night,” and “It Came Upon the Midnight Clear.”

Sarah Hunt (Belle) is thrilled to be back on Broadway with this exquisite company in this magical Christmas conjuring. She was most recently seen on TNT’s Animal Kingdom. Broadway credits include: The Last Ship, Do I Hear a Waltz, and Spring Awakening. Regional: Grey Gardens, Stilyagi, and Middletown. Other TV credits: “Gone,” “Blacklist,” and “Elementary.” Graduate of Juilliard.

Rachel Prather (Little Fan) recently appeared in the 10-time Tony Award-winning Broadway musical The Band's Visit, originating the role of Julia. Previous credits include The Band's Visit (Off-Broadway—Atlantic Theater Co), Once (1st National tour), Peter and the Starcatcher (1st National tour), Fiddler on the Roof (WBT), and Nine (SpeakEasy Stage). Proud Boston Conservatory alumna. Love to Jeremy and CGF, and special thanks to her family, who taught her the true meaning of Christmas. Instagram: @raypray

Jai Ram Srinivasan (Tiny Tim). Born in Washington DC, Jai is full of hope and excitement for his future in the fashion and entertainment industry as an advocate for kids that are differently-abled. Jai started his career by modeling for Tommy Hilfiger Adaptive, and has walked the NY Fashion Week Runway with Runway of Dreams. Jai hopes to continue his journey showing others with cerebral palsy that anything is possible.

Sebastian Ortiz (Tiny Tim). A Happy 7 yr. old from Washington Heights who loves spending time with family especially his sister, Samantha. Favorite things to do include going to the beach and pool, listening to music, playing drums, reading, playing basketball and baseball, and watching football. Proud Knicks, Yankees and Giants fan! First time on Broadway, but definitely not the last. I’m super excited for this opportunity! Watch out world, I have cerebral palsy but cerebral palsy doesn’t have me!