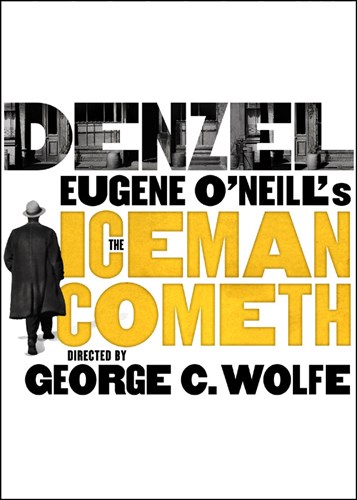 Preview performances for this limited engagement begin Thursday, March 22. The official opening is on Thursday, April 26 at the Bernard B. Jacobs Theatre (242 West 45th Street). Tickets are currently on sale and can be purchased online at icemanonbroadway.com, via Telecharge.com or by phone at 212 239 6200, or by visiting the Bernard B. Jacobs Theatre Box Office beginning Monday, February 5 at 10:00 AM.

Writing about The Iceman Cometh in 1985, Frank Rich of The New York Times raved, "the word 'masterwork' is not invoked lightly. Eugene O'Neill's tragic vision remains undiminished by time. The Iceman Cometh is a ferocious American classic that has lost none of its power to send one shaking into the middle of the night."

Denzel Washington (Hickey) is the most lauded stage and screen actor of his generation. His unforgettable performances have garnered him two Academy Awards, a Tony Award, three Golden Globe Awards, and countless other awards. He received his first Academy Award for the historical war drama Glory (1989) and his second for the crime drama Training Day (2001). In addition, he has received Academy Award nominations for his performances in Cry Freedom (1987), Malcolm X (1992), The Hurricane (1999), Flight (2013), and most recently for Roman J. Israel, Esq. (2017). Mr. Washington produced and directed the critically acclaimed adaptation of August Wilson's Pulitzer Prize-winning Fences, in which he reprised his Tony Award-winning role opposite Viola Davis. The film received four Academy Award nominations including Best Picture and Best Performance by an Actor in a Leading Role for Mr. Washington. Other notable credits include: Much Ado About Nothing (1993), A Soldier's Story (1984), Crimson Tide (1995), Devil in a Blue Dress (1995), Remember the Titans (2000), Inside Man (2006), The Great Debaters (2007), and American Gangster (2007). Mr. Washington's professional acting career began in New York, where he performed in theatre productions such as Ceremonies in Dark Old Men and Othello. He rose to fame when he landed the role of Dr. Phillip Chandler in the NBC long-running hit television series St. Elsewhere. His other credits include the television movies The George McKenna Story, License to Kill, and Wilma. In 2016, he was selected as the recipient of the Cecil B. DeMille Lifetime Achievement Award at the 73rd Golden Globe Awards.

Colm Meaney (Harry Hope). In 2007, Meaney returned triumphantly to the stage in A Moon for the Misbegotten at London's Old Vic, for which he was nominated for an Olivier Award, and was most recently seen in Cat on a Hot Tin Roof at the Young Vic, and later at the Apollo Theatre in London. Film credits include Roddy Doyle's The Barrytown Trilogy (The Commitments, The Snapper, and The Van), Die Hard 2, Dick Tracy, The Last of the Mohicans, Far and Away, The Road to Wellville, Con Air, Layer Cake, The Damned United, Get Him to the Greek, One Chance, Halal Daddy, Free Birds, Norm of the North, Alan Partridge: Alpha Papa, the upcoming Tolkien, and more. Meaney won an Irish Film and Television Award for Best Actor in a Lead Role in Film for his portrayal of Martin McGuinness in The Journey. Television credits include his long-running role as Chief Miles O'Brien on "Star Trek: The Next Generation" and "Star Trek: Deep Space Nine," as well as "Hell on Wheels" and "Will."

David Morse (Larry Slade). Notable stage performances include the 1984 Los Angeles production of Of Mice and Men, the Broadway production of The Seafarer, the Off-Broadway production of The Unavoidable Disappearance of Tom Durnin, and the Off-Broadway production of How I Learned to Drive, for which he won a Lucille Lortel Award, a Drama Desk Award, and an Obie Award. Morse's film credits include The Green Mile, 16 Blocks, The Hurt Locker, World War Z, and Concussion. Morse received Emmy Award nominations for his roles on "House" and HBO's "John Adams," and has appeared in numerous television series, including "St. Elsewhere," "Hack," "Treme," "True Detective," and "Outsiders." Currently, Morse can be seen on NBC's "Blindspot" as Hank Crawford. Morse will next be seen in Showtime's "Escape at Dannemora."

Tammy Blanchard (Cora) received a 2011 Tony Award nomination for her performance in How to Succeed in Business Without Really Trying, and was also nominated for a Tony for her Broadway debut in Gypsy, opposite Bernadette Peters, and for which Ms. Blanchard also received a Theatre World Award. Film credits include Tallulah, Into the Woods, Blue Jasmine, Moneyball, The Good Shepherd, Bella, Cadillac Records, Rabbit Hole, The Music Never Stopped, Certainty, Union Square, Burning Blue, and more. Ms. Blanchard won a Primetime Emmy Award for her portrayal of young Judy Garland in "Life with Judy Garland: Me and My Shadows," for which she also received a Golden Globe Award nomination. Additional television credits include "Hoke," "The Big C," "A Gifted Man," "We Were the Mulvaneys," "Sybil," "Living Proof," "Amish Grace," "The Good Wife," "Law & Order: SVU," "Guiding Light," and "Of Two Minds."

Austin Butler (Don Parrit). Broadway debut. He recently appeared in Death of the Author at the Geffen Playhouse. Butler currently stars in the television series "The Shannara Chronicles." Additional television credits include "Switched at Birth," "Ruby & the Rockits," "The Bling Ring," and "The Carrie Diaries." Film: Yoga Hosers, Aliens in the Attic, Disney's Sharpay's Fabulous Adventure.

Jack McGee (Pat McGloin). Broadway debut. McGee began his stage work at The Brookfield Playhouse in Connecticut. Notable film credits include The Fighter and Crash. Television appearances include "This Is Us," "Pitch," "The McCarthys," and "Rescue Me."

Clark Middleton (Hugo Kalmar) has performed in many of the major theaters in New York City and across the US, creating roles for such writers as Sam Shepard, John Guare, David Ives, John Belluso, Lanford Wilson, and Jason Katims, among others. His solo show, Miracle Mile, was based on his life-long journey with rheumatoid arthritis. Film: Birdman, Snowpiercer, Taking Woodstock, Sin City, Kill Bill: Volume 2. Television credits include "Twin Peaks: The Return," "The Blacklist," "The Path," "Fringe," and "Law & Order." Middleton is a Lifetime Member of The Actors Studio and a member of The Actors Center.

Michael Potts (Joe Mott). Original Broadway companies of 1984, Jitney, The Book of Mormon, Grey Gardens, and Lennon. Potts received the Falstaff Award for Richard III at Classic Stage, and the Obie Award for The American Play at the Public Theater. Select film: 37, Change in the Air, Hometown Hero, Let Me Make You a Martyr, Diggers, The Peacemaker, Stonewall, and The Conspiracy Theory. Television: HBO's "True Detective" opposite Matthew McConaughey and Woody Harrelson, "Show Me A Hero," "The Wire." Recurring roles on "Madam Secretary," "Person of Interest," "Gotham," "Law & Order: SVU," "Damages," and "Nurse Jackie." Potts is a graduate of the Yale School of Drama.

George C. Wolfe (Director) is the winner of five Tony Awards, including two for Best Director for Angels in America: Millennium Approaches, which received the Tony for Best Play, and for Bring in 'Da Noise, Bring in 'Da Funk, for which he also received the Drama League Award. His other theatre directing credits include Shuffle Along, or, the Making of the Musical Sensation of 1921 and All That Followed (New York Drama Critics Circle and Drama Desk Awards for Best Musical); Lucky Guy; The Normal Heart (Drama Desk for Best Director, Tony for Best Revival of a Play); Jelly's Last Jam (Drama Desk and Outer Critics Circle Awards for Best Book of a Musical); Angels in America: Perestroika (Drama Desk for Best Director, Tony for Best Play); Topdog/Underdog (Obie Award); Twilight: Los Angeles, 1992; Elaine Stritch At Liberty (Tony for Best Special Theatrical Event); The Tempest; The Wild Party; Caroline, or Change; and A Free Man Of Color. He is the writer of the award-winning The Colored Museum and Shuffle Along..., directed and adapted Spunk (Obie), created Harlem Song for the Apollo Theatre, and conceived and directed a celebration of the American Musical at the White House. Mr. Wolfe recently directed and co-wrote the HBO film The Immortal Life of Henrietta Lacks, as well as the HBO film Lackawanna Blues, for which he earned The Directors Guild Award, a National Board of Review Award, an Independent Spirit nomination for Best First Feature, a Christopher Award, and The Humanitas Prize. From 1993-2005 he served as the Artistic Director and Producer of The Public Theater, and he is the Chief Creative Officer for the Center for Civil and Human Rights. Additional awards include The Actors' Equity Paul Robeson Award, The Society of Directors and Choreographers' "Mr. Abbott" and Joe A. Calloway Awards, The Dramatists Guild's Hull-Warriner Award, The New Dramatists' Outstanding Career Achievement Award, The NAACP Lifetime Achievement Award, The Lambda Liberty Award, The Spirit of the City Award, The Brendan Gill Prize, The Distinguished Alumni Award from New York University, and a Princess Grace Award for fostering the careers of young artists. Mr. Wolfe was named a Library Lion by the New York Public Library, and a living landmark by the New York Landmarks Conservancy.

Ann Roth (Costume Design) is a Tony Award-winning costume designer with over 100 theatre design credits. Select Broadway credits include The Odd Couple, Purlie, Seesaw, The Best Little Whorehouse in Texas, They're Playing Our Song, Hurlyburly, The House of Blue Leaves, The Book of Mormon, The Nance (Tony Award), A Raisin in the Sun, This Is Our Youth, A Delicate Balance, Blackbird, Shuffle Along..., and The Front Page. Film credits include The English Patient (Academy Award), The Post, Julie & Julia, The Reader, Doubt, Mamma Mia!, Cold Mountain, The Hours, The Talented Mr. Ripley, The Birdcage, Klute, Working Girl, Silkwood, 9 to 5, Hair, and Midnight Cowboy. Roth was inducted into the Theater Hall of Fame in 2011.