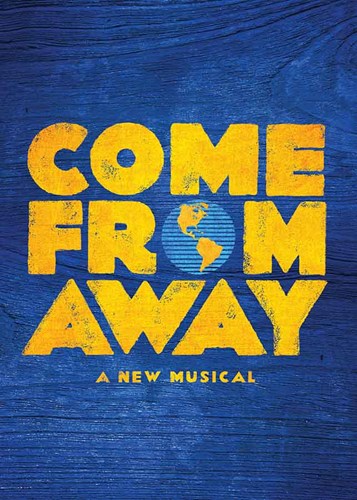 “COME FROM AWAY IS A GORGEOUS LIFE-AFFIRMING CELEBRATION OF LOVE AND HUMANITY. WITH EVERYTHING HAPPENING IN THE WORLD RIGHT NOW, IT'S WHAT WE ALL NEED. COME FROM NEAR, COME FROM FAR, JUST MAKE SURE YOU COME AND SEE THIS GLORIOUS SHOW.” – Stefan Kyriazis, Daily Express (UK) – March 2, 2022

(New York, NY) COME FROM AWAY officially becomes the longest running show in the 105-year history of the Gerald Schoenfeld Theatre today with its 1,544th Broadway performance, surpassing the original production of JEKYLL & HYDE. The Tony & Olivier Award-winning musical will celebrate this milestone with an honorary street renaming of West 45th Street between 7th and 8th Avenues to “Come From A-Way” for the day. COME FROM AWAY will also welcome former stars who have appeared on the Gerald Schoenfeld/Plymouth Theatre stage for a special performance tonight to mark the occasion including Tony Award winner Andre de Shields (Ain’t Misbehavin’), Tony Award nominee Robert Cuccioli (Jekyll & Hyde), Tony Award nominee Christiane Noll (Jekyll & Hyde), Tony Award nominee Hunter Foster (The Bridges of Madison County) and Maulik Pancholy (It’s Only A Play).

After 1,670 performances and 25 previews on Broadway, COME FROM AWAY will play its final Broadway performance on Sunday, October 2, 2022 at the Gerald Schoenfeld Theatre (236 West 45th Street). By the time the company takes its final bow, COME FROM AWAY will be the 49th longest-running production in Broadway history and the most successful Canadian musical of all time.

A “Best Musical” winner all around the world, COME FROM AWAY began performances on Broadway on February 18, 2017, and officially opened to critical acclaim on March 12, 2017, earning 7 Tony Award nominations including Best Musical and winning the Tony Award for Best Direction of a Musical (Christopher Ashley). The original musical recouped its $12 million capitalization in less than 8 months on Broadway.

Following the Broadway shutdown, COME FROM AWAY reopened on September 21, 2021 after a special free performance with Ford’s Theatre at Washington D.C.’s National Mall in front of the Lincoln Memorial on Friday, September 10, 2021 in commemoration of the 20th Anniversary of 9/11. The musical’s road to Broadway also included two benefit concert performances at the hockey rink in Gander, Newfoundland, the small Canadian town where the musical takes place.

There are four global productions of COME FROM AWAY including on Broadway; the four-time Olivier Award-winning, including Best Musical, production in London’s West End; the North American Tour and the Australian National Tour. COME FROM AWAY will return to Toronto following a run at Ottawa's National Arts Centre in July 2024.

The Critics’ Choice Award-nominated live filmed version of COME FROM AWAY, captured from the Gerald Schoenfeld Theatre stage during the shutdown, is streaming globally on Apple TV+.

COME FROM AWAY tells the remarkable true story of 7,000 stranded passengers and the small town in Newfoundland that welcomed them. Cultures clashed and nerves ran high, but uneasiness turned into trust, music soared into the night, and gratitude grew into enduring friendships. On September 11, 2001, the world stopped. On September 12, their stories moved us all.

Tickets for COME FROM AWAY on Broadway are available at Telecharge.com (212.239.6200) and the Gerald Schoenfeld Theatre box office, and range from $49 - $177 (including $2 facility fee).  A limited number of $38 general rush tickets (including the $2 facility fee) will be available at the Gerald Schoenfeld Theatre box office when it opens for that day’s performance(s). Limited two tickets per person, subject to availability. Cash and major credit cards are accepted.

The playing schedule for COME FROM AWAY on Broadway is as follows: Tuesday through Friday at 7pm and Saturday at 8pm, with matinees on Wednesday and Saturday at 2pm and Sunday at 3pm.

COME FROM AWAY was originally co-produced in 2015 by La Jolla Playhouse and Seattle Repertory Theatre, and presented in 2016 by Ford’s Theatre in Washington, DC and Mirvish Productions at the Royal Alexandra Theatre in Toronto, CA. COME FROM AWAY (NAMT Festival 2013) was originally developed at the Canadian Music Theatre Project, Michael Rubinoff Producer, Sheridan College in Oakville, Ontario, Canada and was further developed at Goodspeed Musicals’ Festival of New Artists, in East Haddam, CT. The Canada Council for the Arts, The Ontario Arts Council, and the Fifth Avenue Theatre in Seattle WA also provided development support.

The Shubert Organization is committed to the health and safety of all members of the Broadway community—theatre employees, production staff, cast, and audience members. View Details and Terms & Conditions. Safety guidelines will continue to be updated on the official COME FROM AWAY website.

WHAT THE CRITICS ARE SAYING

“YOU LEAVE THE THEATRE FULL OF HOPE!” – Daily Express

“A HIT AND A MASTERPIECE! JOYOUS, UPLIFTING AND PENTY OF HUMOR!” – Herald Sun

“BEAUTIFULLY GIVES PEOPLE REASON TO COME TO THE THEATER—AND COME TOGETHER.” – Chicago Tribune

“A MIGHTY MUSICAL THAT REMINDS US OF THE POWER OF HUMAN GOODNESS!” – Los Angeles Times

“EXUBERANT! THE IMPACT IT’S HAVING ON HEARTS AND MINDS IS REMARKABLE. AN EFFERVESCENT MUSICAL ANTIDOTE FOR WHAT AILS THE AMERICAN SOUL.” – The Washington Post

“THIS STORY TOUCHED THE WORLD AND CELEBRATES THE BEST THAT WE CAN ALL BE. WE NEED IT, ESPECIALLY RIGHT NOW.” – Tom Brokaw, NBC News

CRITIC’S PICK! “THE CATHARSIS WE NEED IN THIS AMERICAN MOMENT. IMAGINATIVE AND EMOTIONAL. A GALE OF GOOD WILL BLOWS OUT OF THIS SMART, ROBUST SHOW.” – The New York Times

“IT DOES WHAT ALL THE BEST MUSICALS DO: IT TAKES YOU TO A PLACE WHERE YOU DIDN’T KNOW YOU WANTED TO GO, AND MAKES YOU NOT WANT TO LEAVE.” – Newsweek

“A GLOBAL PHENOMENON!” – The Guardian

“THIS MIRACULOUS MASTERPIECE IS TOTALLY, SOUL-FEEDINGLY WONDERFUL.” – Time Out

“A MOVING AND THOROUGHLY ENTERTAINING TRIBUTE TO THE INDOMITABLE HUMAN SPIRIT.” – Variety