CHURCH AND STATE to Have New York Premiere 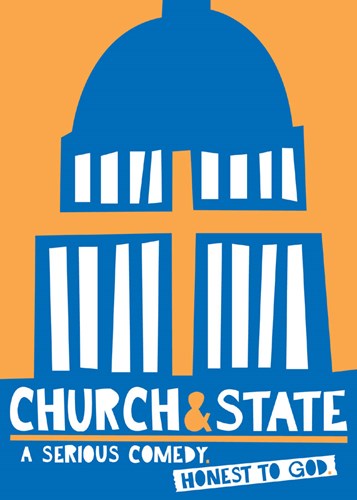 IN ASSOCIATION WITH NEWYORKREP AND THE TELLING COMPANY

TO PRESENT THE NEW YORK PREMIERE OF

A PLAY BY JASON ODELL WILLIAMS

Church & State is a fast-paced, seriously funny take on faith, politics, and “The Twitter.” It’s three days before Charlie Whitmore’s Senate reelection and he’s decided to finally tell the public exactly what’s on his mind, no filter. What could possibly go wrong?

Directed by Markus Potter (Stalking the Bogeyman), the cast will feature Rob Nagle (“Castle,” “Mad Men”) in the role of the conflicted Senator for which he received an Ovation Award Nomination for Best Lead Actor in a Play.  Additional casting and creative team will be announced at a later date.

Originally developed with Artistic director Ralph Meranto and JCC CenterStage, Church & State was produced as a National New Play Network Rolling World Premiere at JCC CenterStage in Rochester and The Skylight Theatre in Los Angeles where it recently received three Ovation Award nominations including Best Playwriting for an Original Play, Best Production (Intimate Theatre), and Best Lead Actor in a Play.​ The Los Angeles Times praised it as “gripping entertainment,” and “simply superb,” while The Huffington Post called it “powerful, humorous and highly contemporary.”

Jason Odell Williams (Playwright) is an Emmy-nominated writer and producer. His latest play, Church & State, was recently nominated for three L.A. Ovation Awards including Best Playwriting for an Original Play. His play Handle With Care (published by Dramatists Play Service) was a New York Times Critics’ Pick and ran for over 100 performances Off-Broadway. The play has been produced 21 times in the last five years in the U.S. and Canada. Other plays: Baltimore in Black & White (the cell theatre); Someone Else (NC Stage); The Science of Guilt (DR2). Readings: Primary Stages, The Blank Theatre, The Lark and EST. Jason's first novel, Personal Statement, was optioned for a three-picture deal and he is currently adapting it for the screen.

Markus Potter (Director) is a NYC based director, and the producing artistic director of NewYorkRep. Recent directing: Stalking the Bogeyman at London's Southwark Playhouse and Off-Broadway at New World Stages (Outer Critics Circle Award nomination, NY Times Critics' Pick), Lost Boy Found In Whole Foods by Tammy Ryan at The Portland Stage Company, Why You Beasting by David Don Miller (Best of FringeNYC - Time Out NY critic's pick), Someone Else by Jason Odell Williams at NC Stage, as well as directing at Luna Stage and the Weston Playhouse. Potter received his MFA from Columbia University and has taught and guest directed at many MFA/BFA programs around the county including the Guthrie, The Denver Center, AMDA, and Adelphi University. He is currently a mentor to the MFA playwrights at the New Hampshire Institute of Art.  MarkusPotter.com

Charlotte Cohn (Producer) was born in Denmark and raised in Israel where she served in the Israeli Army as a Commanding Officer. She is a founding producer of the New York Music Theatre Festival (NYMF) and Mainstreet Musicals. Other producing credits include: Baltimore in Black & White (the cell theatre - Resident Artist), Rated P for Parenthood, The New York Times Critics’ Pick Handle With Care (both at the Westside Theater Off-Broadway), and the upcoming Church & State. Charlotte has collaborated with her husband Jason Odell Williams on a variety of writing projects including their screenplay Personal Statement and their TV pilot “Birdland,” which was a Top Ten Finalist in the Tracking Board’s 2015 Launch Pad Pilot Competition. Charlotte’s screenplay By the Book was a finalist in the NYWIFT 2015 competition, sponsored by Meryl Streep.