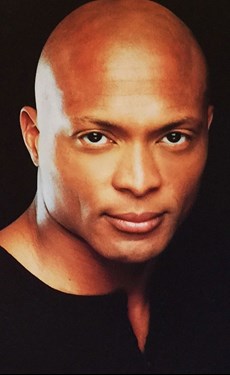 Eddie George makes his Broadway debut in Chicago following stage appearances in such works as Matthew Lopez’s The Whipping Man (Nashville Repertory Theatre), Suzan-Lori Parks’ Topdog/Underdog (Amun Ra Theatre) and in the title roles of both Othello and Julius Caesar at the Nashville Shakespeare Festival. His transition to the stage completes the journey that he began following the conclusion of his NFL playing career, which saw him providing commentary and analysis for the Tennessee Titans and FOX’s college football coverage. George won screen time in such TV series as NBC’s American Dream Builders and in such films as Best Man Holiday and The Game Plan. Since then, George has worked to refine his craft onstage, including not only the credits indicated above, but also work with his Nashville-based theatrical troupe, Actors By George, which he founded in 2012. Eddie George won the Heisman Trophy in 1995 while playing for the Ohio State University. That honor served as the prelude to a nine-year career in the NFL, which saw him lead the Tennessee Titans to Super Bowl XXXIV and selected to the Pro Bowl four consecutive years, finishing his career with the Dallas Cowboys under legendary coach Bill Parcells. Since the conclusion of his playing career, George has additionally received his MBA from Northwestern University and founded Edward George Wealth Management Group. He resides in Nashville with his wife of 11 years, Tamara Johnson, and his family. He is on the board of the Tennessee Performing Arts Center in Nashville.