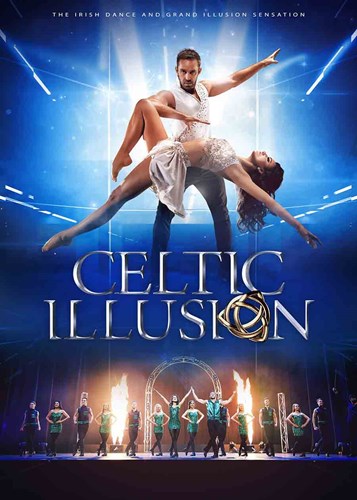 A Fusion of Contemporary Irish Dance,
Magic, and Grand Illusions

Performances begin on June 30, with opening night set for July 10. Celtic Illusion will play a limited engagement through September 11.

Fusing contemporary Irish Dance with magic and grand illusions, Celtic Illusion features a cast of champion and internationally acclaimed dancers, including performers from both Riverdance and Lord of the Dance. Displaying some of the fastest taps in the world, the dancers’ thunderous rhythm fills the stage in perfect unison. Celtic Illusion is led by Australia’s Anthony Street, the first Australian to perform leading roles in Michael Flatley’s widely-acclaimed Lord of the Dance, including the very role that Michael Flatley originally performed himself.

Since its premiere in 2011, Celtic Illusion has played to sold-out audiences across Australia, Canada, and the US. The Boston Globe cheers, “Riverdance meets David Copperfield…the magic enhances the dance!,” and The Calgary Herald raves, “A global feat! Irish dancing with a little Vegas magic.” The Canberra City News calls Celtic Illusion “A showstopper of a show,” while The Irish Edition said it’s a “breathtaking fusion.”

“Before I was a dancer, my great passion was magic and illusion, but when I worked with Lord of the Dance for four years beginning when I was 20, magic got pushed to the side,” said Anthony Street. “When I decided to create this show in Australia, it dawned on me that I should combine my two passions to give audiences a new sensory experience.”

“We are excited to share this beautiful show with New York audiences, and it’s just the tonic necessary after the past two years.” said Annerin producer Jeff Parry. “We have been humbled that Celtic Illusion has really connected with people, leading to sold out houses and rapturous standing ovations, and we look forward to spending the summer in the Big Apple.”

Celtic Illusion is General Managed by Visceral Entertainment. Tinc Productions is the Production Manager, Advertising is by Hofstetter + Partners, and Marketing & Promotions is by Leanne Schanzer Promotions.

Annerin Productions produced Rain on Broadway, which recouped back twice the capitalization in 12 weeks, and then played another 8 months at the Brooks Atkinson Theater. Rain has been a staple on Broadway subscriptions since that time. In 2012, they also produced Let it Be at the Princess of Wales in the West End where it recouped in 14 weeks. The show went on to have two runs at the West End’s Garrick Theatre, one run at the West End’s Savoy Theatre and continues to tour the UK, Japan and Germany. Let It Be was scheduled to perform in Atlantic City this summer for the opening of the Hard Rock Theatres but is being rescheduled because of Covid-19. Annerin Productions also produced We Will Rock You, which recently toured for eight months in North America and played six shows at the Hulu Theatre at Madison Square Garden, where it grossed 1.2 million dollars.

Anthony Street (creator, choreographer, lead dancer) joined the Australian Irish Dance company shortly before 2000, going on to perform at numerous corporate events and venues including the MCG, Hamer Hall (Melbourne Arts Centre) and the Sydney Opera House. At the age of 19 he set off on a 5-month tour that would turn into an eight-year career travelling the world, including a residency in Dublin with Dance of Desire as well as tours of France and Germany, before being cast as principal dancer for Michael Flatley’s Lord of the Dance. Anthony’s next dream was to create his own production and after months of stressful preparation, in November 2011 Celtic Illusion was born. Now the popular stage show regularly performs to sold out audiences across Australia, with Anthony performing the multi-faceted roles of director, producer, choreographer and lead dancer.

Angela Little (co-composer/co-arranger) is a multi-talented composer, singer, orchestral arranger, songwriter and pianist who composed the incredible contemporary score for Celtic Illusion. Angela’s best known work to date was on Baz Luhrmann’s epic film Australia for which she co-composed and scored additional music for the film, leading to a nomination for an AFI Award for Best Original Score in 2009. Angela was also the co-writer and singer of the film’s love song ‘By The Boab Tree’ which was the first song featured on the film’s end credits and was amongst 49 songs short-listed for an Academy Award for Best Original Song from a Motion Picture in 2009. Her work was also nominated for a number of other national and international awards, including an APRA-AGSC Screen Music Award (AUS) and a Golden Satellite Award (USA). Before working on Australia Angela was one of only four students nationwide selected to study for a Masters Degree in Screen Composition at the Australian Film, Television & Radio School (AFTRS) in 2007. Angela has since composed and edited music for a wide array of other film, TV and theatre projects for clients including Southern Star, FOX 8, Nickelodeon, The Bell Shakespeare Company, Great Southern Land and AFTRS.

Michael Londra (co-composer) is an Emmy® nominated singer and producer. He was the lead singer of Riverdance on Broadway. He is featured on the Universal Records Arias Ancora project with Andrea Bocelli and Luciano Pavarotti. His Beyond Celtic concert special was aired nationally on PBS in 2012. He is the host and producer of Ireland with Michael, a travel and music series for Public Television. He’s partnered with Venuworks’ Steve Peters to produce a US National tour of NOËL the Musical written by Artemis Fowl author, Eoin Colfer in 2018.