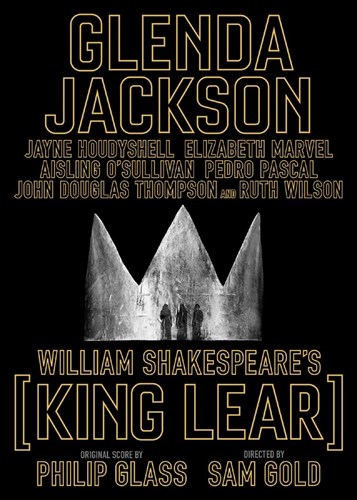 TO BE JOINED BY

Academy Award nominated and Golden Globe and BAFTA Award-winning composer Philip Glass will provide an original score for the production.

The production will also feature Sean Carvajal, Dion Johnstone, Russell Harvard, and Matthew Maher, with additional casting to be announced.

Glenda Jackson (King Lear) made a triumphant return to Broadway earlier this year after a 30-year absence, winning every possible award for her performance in the smash hit revival of Edward Albee’s Three Tall Women, including the Tony Award, Drama Desk Award, Drama League Award and Outer Critics Circle Award. Jackson’s return to Broadway was hailed by critics and audiences as the theatrical event of the season, and the production broke the Golden Theatre’s house record five times.

Jackson’s first Academy Award came in 1970 with Ken Russell’s film Women in Love. She went on to star in film classics such as Sunday Bloody Sunday, for which she received an Academy Award nomination and a BAFTA Award, and A Touch of Class, for which she won her second Academy Award and a Golden Globe Award. Her films also include Mary, Queen of Scots; The Romantic Englishwoman; Hedda (Academy Award nomination); The Incredible Sarah; House Calls; and Stevie. In 1971, Ms. Jackson starred as Queen Elizabeth I in the BBC serial “Elizabeth R,” for which she received two Emmy Awards. She was also nominated for Emmy and Golden Globe Awards for “The Patricia Neal Story.” Ms. Jackson began her stage career as a member of the Royal Shakespeare Company. She made her Broadway debut in 1965 in The Persecution and Assassination of Jean-Paul Marat as Performed by the Inmates of the Asylum of Charenton Under the Direction of the Marquis de Sade, and went on to star in Rose (1981), Strange Interlude (1985), and Macbeth (1988), receiving a Tony Award nomination for each performance. Ms. Jackson spent 23 years as a Member of Parliament and in 2016, returned to acting, playing the title role in Shakespeare’s King Lear at The Old Vic, for which she received the Evening Standard Award for Best Actress, and a Critics Circle Award for Best Shakespearean Performance. Ms. Jackson was made a Commander of the British Empire in 1978.

Ruth Wilson (Cordelia/Fool), a two-time Olivier Award winner and Golden Globe Award winner, made her Broadway debut in Nick Payne’s Constellations, opposite Jake Gyllenhaal. She is best known for her role as Alison Lockhart in the Showtime series “The Affair,” (Golden Globe Award). Film credits include The Little Stranger, Dark River, I Am the Pretty Thing That Lives in the House, Suite Française, Locke, Saving Mr. Banks, The Lone Ranger, and Anna Karenina. She received Olivier Awards for Best Actress for Anna Christie opposite Jude Law, and Best Supporting Actress for A Streetcar Named Desire opposite Rachel Weisz, both at the Donmar Warehouse. She was nominated for an Olivier Award for Best Actress for Hedda Gabler at the National Theatre. On television, Wilson starred in the acclaimed BBC series “Luther,” which was nominated for eight Emmy Awards. She received BAFTA and Golden Globe nominations for Best Lead Actress for the BBC miniseries “Jane Eyre.” She debuted on the London stage in 2007 in the National Theatre’s production of Maxim Gorky’s Philistines, and starred in the Almeida Theatre adaptation of Ingmar Bergman’s Through a Glass Darkly.

Jayne Houdyshell (Earl of Gloucester) has previously starred on Broadway in A Doll’s House, Part 2 (Tony Award nomination); The Humans (Tony Award); Fish in the Dark; Romeo and Juliet; Follies (Tony nomination); The Importance of Being Earnest; Dead Accounts; Bye Bye Birdie; Wicked; and Well (Tony nomination, Theatre World Award). Her Off-Broadway credits include Relevance; The Humans (Obie Award, Drama Desk Award for Best Ensemble); Harrison, TX; Coraline; The Receptionist; The New Century; The Pain and The Itch; Much Ado About Nothing; Well (Obie). She is the recipient of a 2013 Special Drama Desk Award “for her artistry as an exceptionally versatile and distinctive Broadway and Off-Broadway performer.” Her film credits include Lucky Stiff, Everybody’s Fine, Garden State, Trust the Man, and Bounty Hunter. TV: “The Good Fight," “Quantico,” “American Odyssey,” “Elementary,” “Blue Bloods,” and “Law & Order: SVU.”

Aisling O’Sullivan (Regan) makes her Broadway debut in King Lear. She studied at Dublin’s Gaiety School of Acting and joined the Abbey Theatre in 1991, where her credits included Marble, The Wake, Lay Me Down Softly, The Famine, The Honeyspike, Silverhands, The Winter Thief, Away Alone, The Corsican Brothers, The Power of Darkness, and The Murphy Initiative. Other theatre credits include The Beauty Queen of Leenane, The Playboy of the Western World, Big Maggie, Bailengagaire, and The Approach at the Druid Theatre, and Crestfall at The Gate Theatre. London: Liola, Mutabilitie, and The Cripple of Inishmaan at the National Theatre; The Duchess of Malfi at the Royal Shakespeare Company; The Maids at the Young Vic; Miss Julie at the Haymarket Theatre; and Hysteria at The Royal Court and the Duke of York’s. Film credits include Michael Collins, The Butcher Boy, The Actors, The One and Only, The Announcement, The American, The War Zone, and Six Shooter. Television: “The Clinic” (Irish Film and Television Award), “Raw,” “Me and Mrs. Jones,” “Shockers,” “Life Support,” and “Cracker,” among others.

Pedro Pascal (Edmund) makes his Broadway debut in King Lear. He has appeared Off-Broadway in Jordan Harrison’s Maple and Vine (Playwrights Horizons); Nilo Cruz’s Beauty of the Father and Roberto Aguirre-Sacasa’s Based on a Totally True Story (Manhattan Theatre Club); Trista Baldwin’s Sand (Women’s Project Theater); David Greenspan’s Old Comedy (CSC Theatre); Terence McNally’s Some Men (Second Stage); and Shakespeare in the Park’s Macbeth and Much Ado About Nothing. He also directed Underneathmybed, Killing Play, and Yosemite at Rattlestick Playwrights Theater. He received the Los Angeles Critics Circle Award and Garland Award for his performance in the International City Theater’s production of Orphans. He is best known for his roles as Oberyn Martel in the HBO series “Game of Thrones,” and Javier Peña in the Netflix series, “Narcos.” Other television credits include “Buffy the Vampire Slayer,” “The Good Wife,” “Brothers and Sisters,” “Lights Out,” “Homeland,” “The Mentalist,” “Red Widow,” “Nurse Jackie,” “Body of Proof,” “Without a Trace,” “NYPD Blue,” “Graceland,” and all three “Law & Order” shows. Film credits include If Beale Street Could Talk, The Equalizer 2, Wonder Woman 1984, Kingsman: The Golden Circle, Prospect, The Adjustment Bureau, The Great Wall, Sweet Little Lies, I Am That Girl, Sisters (Hermanas), and Window Shopping. He is a member of the LAByrinth Theatre Company.

Dion Johnstone (Duke of Albany) will make his Broadway debut in King Lear. His theatre credits include nine seasons with the Stratford Festival, where his roles included Orlando in As You Like It, Caliban in The Tempest (opposite Christopher Plummer), Oberon in A Midsummer Night’s Dream, and the title role in Othello. Other credits include Mark Anthony in Julius Caesar, Pericles, and Ira Eldridge in Red Velvet for Chicago Shakespeare Theater; title role in Coriolanus for Red Bull Theater; Theseus and Oberon in A Midsummer Night’s Dream for Shakespeare Theatre Company in Washington, D.C., and also on tour in Macau, China. He began his professional career in Vancouver performing for two seasons with Bard on the Beach Shakespeare Festival, as well as productions at the Arts Club Theatre and the Vancouver Playhouse. Television: “Stargate SG-1” (Showtime); “Ties That Bind” (UPtv); “Star Falls” (Nickelodeon). Education: BFA in Acting, University of Alberta.

Russell Harvard (Duke of Cornwall) is currently starring in Craig Lucas’ I Was Most Alive with You at Playwrights Horizons, a role he originally performed at Huntington Theatre Company. In 2012, he made his Off-Broadway debut in Tribes, earning a Theatre World Award, and receiving nominations for Drama League, Outer Critics Circle and Lucille Lortel Awards. His theatre credits include Pasadena Playhouse's Our Town, Open Circle Theatre's production of The Who’s Tommy, and the DeafWest Broadway revival of Spring Awakening. He is most recognized for his role as H.W. Plainview in the 2008 Academy Award-nominated film There Will Be Blood, directed by Paul Thomas Anderson. He also starred as Matt Hamill, the first deaf wrestler to win a National Collegiate Wrestling Championship, in The Hammer. His television credits include two seasons on the multiple Emmy and Golden Globe Award-winning “Fargo” (FX), ABC Family's “Switched at Birth” (recurring), “Odd Mom Out,” “Fringe” and “CSI: NY.”

Philip Glass (Original Score). Theatre and Opera credits include Einstein on the Beach; Satyagraha; Akhnaten; The Civil Wars; The Juniper Tree; Hydrogen Jukebox; 1000 Airplanes on the Roof; The Fall of the House of Usher; The Voyage; Orphée; La Belle et la Bête; Les Enfants Terribles; The Marriages Between Zones Three, Four and Five; Monsters of Grace; In the Penal Colony; The Trial; The Photographer; Gallileo Gallilei; The Sound of a Voice; Waiting for the Barbarians; White Raven; The Making of the Representative for Planet 8; Appomattox; The Lost; The Perfect American; and The Crucible. Film credits include No Reservations, Cassandra’s Dream, Notes on a Scandal, The Illusionist, Roving Mars, Taking Lives, The Fog of War: Eleven Lessons from the Life of Robert S. McNamara, The Hours, Naqoyqatsi, The Truman Show, Dracula, Kundun, The Secret Agent, The Thin Blue Line, Powaqqatsi, Mishima: A Life in Four Chapters, and Koyaanisqatsi.

“Journalists all over the world have expended reams of copy trying to discover the burning secret center of Glenda Jackson.” – The New York Times

“To say that Glenda Jackson is an extraordinary actress is like saying that the sun rises in the east.” – Chicago Tribune

“Fierce, unyielding, an all-terrain vehicle, Glenda Jackson airs out a room simply by entering it. She contains the future.” – The New Yorker

“The best actress alive.” – The Guardian

“Glenda Jackson can do just about anything.” – Los Angeles Times

“Glenda Jackson is back, and all is right with the world once more. The word is ‘unforgettable.’” – Observer