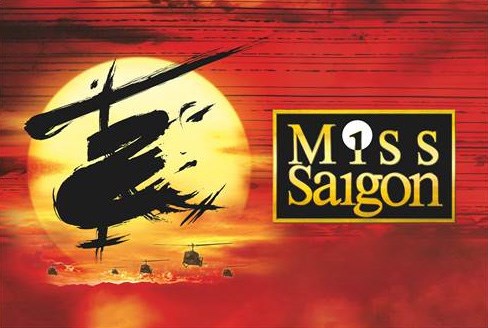 Cameron Mackintosh announced today that his acclaimed new production of Boublil and Schönberg’s legendary musical MISS SAIGON – a smash hit in London since its premiere there in May, 2014 - will open on Broadway in the spring of 2017 at a Shubert theater to be announced.  The Broadway return of MISS SAIGON will feature its acclaimed London stars, Filipino-born and L.A resident Jon Jon Briones as The Engineer and 19 year-old North Carolina native Eva Noblezada as Kim, who was discovered by the MISS SAIGON casting team at the National High School Musical Awards two years ago in New York.   First performance and opening night dates will be announced at a later date.

Cameron Mackintosh said “It’s hard to believe that it has been nearly 25 years since MISS SAIGON first opened in New York, but if anything, the tragic love story of the show has become even more relevant today with the conflicts in Syria, Afghanistan and Iraq.  This new production, directed by Laurence Connor, takes a grittier, more realistic approach than the original production while still delivering the power and epic sweep of Boublil and Schönberg’s tremendous score.  Of all my shows, MISS SAIGON is the one that I have received the most requests from the public to bring back, and I am thrilled that Broadway audiences will get to see this tremendous new production that audiences and critics in London have embraced since it opened last year.  And I am delighted that our wonderful London stars, Jon Jon Briones and Eva Noblezada, will be bringing their stunning performances across the Atlantic.”

"Because of the complexity of creating as big a production as MISS SAIGON, we have decided to put together one Company to play North America, launching with a limited season on Broadway.  And I am thrilled that every major theater across the country is eager to host the show, which has not been seen on this grand scale, and with such an unusually large multi-cultural cast, since the original production closed 15 years ago."

MISS SAIGON will perform on Broadway through January 15, 2018 before launching its national tour later in the year in Providence, R.I, followed by engagements in Boston, Chicago, Los Angeles, San Francisco, Toronto, Washington, DC, Philadelphia and more than 50 additional cities.

The full backstage story of how the new production that will be on Broadway and then touring North America  was created, "The Heat Is Back On," has just been released on DVD by Universal and is one of the most comprehensive insights into how a big musical is put together that has ever been filmed.

The new London production of MISS SAIGON opened in May 2014 to record-breaking advance sales and critical acclaim.  Dominic Cavendish in The Daily Telegraph wrote, “This thrilling new production spills out beyond theatre and speaks directly to the times we live in – magnificent performances.”  Christopher Stevens in The Daily Mail said, “The greatest musical of all-time just got even better!”  And Dominic Maxwell in The Times called the production “thrilling, soaring and spectacular.” The reviews for its stars were also raves.   David Benedict in Variety wrote, “In an astonishing stage debut, Eva Noblezada gives a thrilling performance as Kim, with poise, power and a superb voice.”  And Dominic Maxwell in The Times said Jon Jon Briones plays the Engineer with “brilliant, avaricious charm.”

In February, MISS SAIGON swept the board at the 2015 Whatsonstage.com awards winning a record breaking nine awards, the most awards ever won by a single show in the 15 year history of the awards including: Best West End Show; Best Revival of a Musical; Best Leading Actress in a Musical (Eva Noblezada) and Best Leading Actor in a Musical (Jon Jon Briones).

MISS SAIGON has music by Claude-Michel Schönberg with lyrics by Richard Maltby Jr. and Alain Boublil, adapted from original French lyrics by Alain Boublil, with additional lyrics by Michael Mahler. The new production is directed by Laurence Connor with musical staging by Bob Avian and additional choreography by Geoffrey Garratt.  Production design is by Totie Driver and Matt Kinley based on an original Concept by Adrian Vaux; costume design by Andreane Neofitou; lighting design by Bruno Poet; sound design by Mick Potter; and orchestrations by William David Brohn.

Since its London premiere in 1989, Cameron Mackintosh’s production of Alain Boublil and Claude-Michel Schönberg’s epic musical MISS SAIGON has become one of the most successful musicals in history.  The original Broadway production of MISS SAIGON opened on April 11, 1991 with what was the largest advance sale in Broadway history ($37 million).  The show went on to play for nearly ten years and 4,063 performances seen by more than 5.9 million people.   MISS SAIGON has been performed in 28 countries, over 300 cities in 15 different languages, has won over 40 awards including 2 Olivier Awards, 3 Tony Awards, and 4 Drama Desk Awards and been seen by over 35 million people worldwide.

The new production of MISS SAIGON will repeat its London success in Japan next year and will open over the next few years in Germany, Australia, Asia and on tour around the UK, Europe and the Middle East.

JON JON BRIONES (The Engineer) was born and raised in the Philippines and now calls Los Angeles home.  Since first venturing abroad in 1989 to join the original London cast of MISS SAIGON, Jon Jon has played The Engineer in Germany, on tour in the U.S and the UK, in Asia and back home in the Philippines.  In Los Angeles he starred in The Romance of Magno Rubio (Ovation Best Lead Actor nomination) and Sweet Karma. Other roles he has played internationally include Frederik Egerman in A Little Night Music, Enjolras in Les Miserables, Seymour in Little Shop of Horrors, Tateh in Ragtime, Lion in The Wiz, Laertes in Hamlet, Rapunzel’s Prince in Into the Woods, Slovitch in Fools, Man 1 in Closer than Ever and Lukas in Peregrinasyon (Ma-Yi

EVA NOBLEZADA (Kim) is a native of Charlotte, North Carolina.  She was spotted by New York casting director Tara Rubin during a performance at the National High School Musical Theatre Awards (also known as the Jimmy Awards) at the Minskoff Theatre in 2013.  Rubin was so moved by Eva’s talent that she set up an audition with Cameron Mackintosh, who was preparing his London revival of MISS SAIGON. Several call-backs later with Mackintosh and the creative team, Eva was chosen to star as Kim, making her professional and West End debut in the show.  She garnered unanimous critical acclaim for her performance and received the Whatsonstage Award as Best Actress in A Musical.