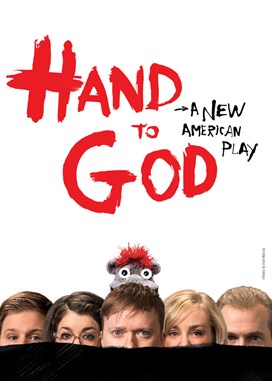 Producer Kevin McCollum has announced that his Tony® Award-nominated comedy Hand to God must close on Broadway on January 3, 2016 and will immediately transfer to London’s West End, with performances beginning on February 5, 2016 at the famed Vaudeville Theatre. Robert Askins’ riotous comedy opened to rave reviews on April 7, 2015 at Broadway’s Booth Theatre (222 West 45th Street), and was previously presented in New York City at Ensemble Studio Theatre in 2011 and Off-Broadway by MCC Theater in 2013. Moritz von Stuelpnagel will recreate his Tony®-nominated direction in London. Tickets to the West End production will go on sale in late October. Complete casting will be announced at a later date.

“Having played an extraordinary 9-month run on Broadway, London is the natural next step for a new American play that is this exciting. We are thrilled that Hand to God will soon be experienced by audiences all over the world,” said producer Kevin McCollum.

Playwright Robert Askins goes for the jugular—by way of sock puppet—in his hilarious and heartbreaking new comedy Hand to God. In it, a shy teenager named Jason is surprised when his Bible School project—a puppet named Tyrone—takes on a shocking, truth-telling personality all its own, forcing everyone in its path, especially Jason’s mother Margery, to confront their own demons as they search for redemption through a mix of riotous laughter and genuinely shocking twists.

Hand to God is produced on Broadway by Kevin McCollum, whose credits include Rent, Avenue Q and In the Heights—each the winner of the Tony® Award for Best Musical; as well as the Tony® nominated hits Something Rotten!, The Drowsy Chaperone and Motown the Musical, among many others.