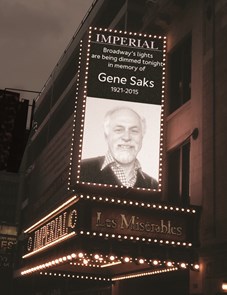 NEW YORK (AP) - Gene Saks, a prolific actor-director who teamed with playwright and fellow New Yorker Neil Simon on hit Broadway and movie productions of such Simon comedies as "The Odd Couple" and "Brighton Beach Memoirs," has died. He was 93.

Saks, who won three Tony Awards for his direction, died from pneumonia Saturday at his East Hampton home in New York, according to his son Daniel.