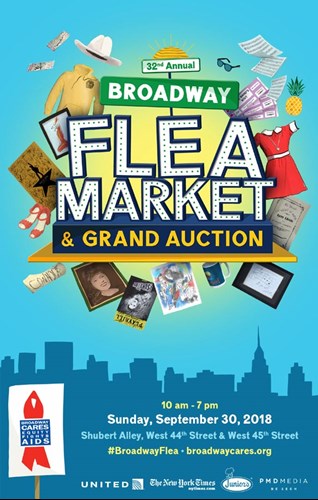 Be a part of the biggest day for Broadway fans as the 32nd Annual Broadway Flea Market & Grand Auction returns to the heart of New York City’s theatre district.

The event historically has taken place on the third Sunday of September. This year, however, it is set for September 30 due to activities scheduled for the UN General Assembly the weekend before.

Tens of thousands of Broadway fans will celebrate their love of all things theatre by bidding on and buying theatrical treasures including one-of-a-kind show props, tickets to opening night performances, autographed musical phrases, once-in-a-lifetime experiences and more.

More than 50 tables full of Broadway memorabilia, collectible Playbills and unique gems will line the streets. Among the shows scheduled to have tables this year are Aladdin, Anastasia, Beautiful – The Carole King Musical, Dear Evan Hansen, Frozen, Hamilton, Kinky Boots, The Lion King, Mean Girls, NEWSical The Musical, The Phantom of the Opera, Pretty Woman, School of Rock – The Musical, Sweeney Todd, Waitress and Wicked, with a special table featuring items from recently closed shows.

Select items and experiences are available for early bidding now. Auction items include one-of-a-kind onstage and backstage experiences, including walk-on roles in beloved Broadway shows and meet-and-greets with favorite stars. Also available are rare and unique memorabilia that can’t be found anywhere else.

More than 80 legendary, emerging and beloved Broadway and Off-Broadway stars are ready to stop by the Autograph Table and Photo Booth, which again returns to the deck of Junior’s restaurant, at Shubert Alley and West 45th Street. A new grouping of special guests arrive every hour. See this year’s lineup.

Autographs are a $35 donation each hour for all performers that hour; photo prices vary based on the number of requests per performer.

Broadway Cares/Equity Fights AIDS is one of the nation’s leading industry-based, nonprofit AIDS fundraising and grant-making organizations. By drawing upon the talents, resources, and generosity of the American theatre community, since 1988 BC/EFA has raised more than $300 million for essential services for people with AIDS and other critical illnesses across the United States.

Broadway Cares/Equity Fights AIDS is the major supporter of the social service programs at The Actors Fund, including the HIV/AIDS Initiative, the Phyllis Newman Women’s Health Initiative and the Samuel J. Friedman Health Center for the Performing Arts. Broadway Cares also awards annual grants to more than 450 AIDS and family service organizations in all 50 states, Puerto Rico and Washington, DC.