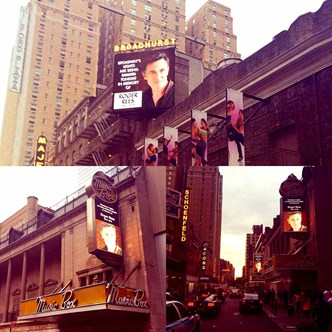 The Broadway community mourns the loss of Tony Award® - winning actor and Tony Award - nominated director, Roger Rees, who passed away on Friday at age 71. The marquees of Broadway theatres in New York were dimmed in his memory on Wednesday, July 15th, at exactly 7:45pm for one minute.

Charlotte St. Martin, President of the Broadway League, said, “We are so fortunate that Roger Rees has graced our stages through the years and inspired us with his brilliant talent. In addition to his acting and directing accomplishments, his generous heart and warm, giving spirit will be greatly missed by his family, friends and fans.”

Roger Rees began his career with the Royal Shakespeare Company. He played Malcolm in the Trevor Nunn 1976 stage and 1978 television production of Macbeth. Most famously, Rees created the title role in the original production of The Life and Adventures of Nicholas Nickleby, David Edgar’s stage adaptation of the Dickens novel, winning both an Olivier Award and a Tony Award® for Best Actor in a Play in 1982. He also starred in the original production of The Real Thing by Tom Stoppard in London in 1984.

Continuing his work in the theatre through the 1990’s, both as an actor and a director, Rees was awarded an Obie Award for his 1992 performance in the Off-Broadway play The End of the Day. In 1995 he was nominated for a Tony Award for Best Actor in a Play for his role in Indiscretions.

He succeeded Nathan Lane in the role of Gomez in the Broadway musical adaptation of The Addams Family. His last West End appearance was in the acclaimed production of Waiting for Godot opposite Ian McKellen.

Rees achieved acclaim as a noted stage director including Peter and the Starcatcher which he developed, first at Williamstown Theatre Festival, then La Jolla Playhouse, and in New York at New York Theatre Workshop and on Broadway for which he received a Tony Award nomination for Best Director (the play won five Tony Awards).

Rees’ last Broadway appearance was the starring role of Anton Schell in The Visit, opposite Chita Rivera, which opened April 23, 2015. Additional Broadway credits included The Winslow Boy, Uncle Vanya, The Rehearsal and London Assurance.
In November 2004, Rees was named Artistic Director of the Williamstown Theatre Festival, only the fourth person to hold the post in its half century history.

On television, he appeared intermittently on the long-running series “Cheers” as the English tycoon Robin Colcord. Later television appearances include “My So-Called Life,” “The West Wing,” and “Warehouse 13.”

His film career began in 1983 when Bob Fosse cast him to star in Star 80. Rees played the Sheriff of Rottingham in Mel Brooks’ film, Robin Hood: Men in Tights. Later film appearances include Frida and The Prestige.

He also participated as narrator for the audiobook edition of “Memnoch the Devil” by Anne Rice.

He is survived by his husband, the playwright Rick Elice.
His full Broadway biography can be found on The Internet Broadway Database.

The Broadway League, founded in 1930, is the national trade association for the Broadway industry. The League’s 700-plus members include theatre owners and operators, producers, presenters, and general managers who present in nearly 200 markets in North America, as well as suppliers of goods and services to the theatre industry. Each year, League members bring Broadway to nearly 30 million people in New York and on tour across the U.S. and Canada. The Broadway League has recently added a new category for International membership to collaborate with professionals from around the world who produce and present Broadway quality theatre.

Visit www.BroadwayLeague.com, or follow The Broadway League on Twitter @TheBwayLeague or on Facebook at www.facebook.com/BroadwayLeague. BROADWAY.ORG is the League’s official on-line headquarters for Broadway in NYC, on tour, and internationally. Download the free Broadway.org mobile app for iOS or Android, and the free IBDB mobile app for iOS or Android.

The Broadway League annually presents the Antoinette Perry “Tony” Awards,® one of the most coveted awards in the entertainment industry, with The American Theatre Wing.

Broadway theatres are filled with an exciting array of new and classic musicals and plays, providing the perfect experience for every audience. Great seats are available at every price point and are easy to buy online, by phone, or in person at theatre box offices. It's always the perfect time to see a show. Broadway performs every day of the week at multiple curtain times to accommodate every schedule.