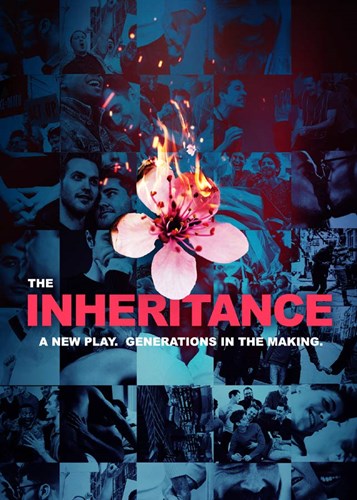 “HERE IS THE PLAY OF THIS YEAR AND LAST YEAR AND QUITE POSSIBLY NEXT YEAR AS WELL.”

THE INHERITANCE will begin previews at Broadway’s Ethel Barrymore Theatre (243 West 47th street) on Friday, September 27, 2019 and will officially open on Sunday, November 17, 2019.

It begins with a gathering of young, gay New Yorkers. Each has a story aching to come out…

Profoundly touching and wickedly hilarious, Matthew Lopez’ highly-anticipated two-part play, THE INHERITANCE, asks how much we owe to those who lived and loved before us, and questions the role we must play for future generations. Brilliantly re-envisioning E. M. Forster’s masterpiece Howards End to 21st-century New York, it follows the interlinking lives of three generations of gay men searching for a community of their own – and a place to call home.

ANDREW BURNAP (Young Man 10 / Toby Darling). Originated the role of Toby Darling in The Inheritanceat The Noel Coward Theatre in London’s West End and London’s Young Vic. Film work includes: Spare Room opposite Skyler Samuels and The Chaperone, for director Michael Engler, opposite Haley Lu Richardson and Elizabeth McGovern. Andrew was seen onstage at The Geffen Playhouse’s West Coast premiere of Matthew Lopez’s The Legend of Georgia McBride in the titular role for director Mike Donahue. Prior to that he was seen on the New York stage in Nicky Silver’s This Day Forward, for director Mark Brokaw, at the Vineyard Theatre and in the title role of "Troilus" in the Public Theater/Shakespeare in the Park production of Troilus & Cressida for director Daniel Sullivan. Andrew is a graduate of University of Rhode Island and Yale School of Drama.

DARRYL GENE DAUGHTRY JR (Young Man #2 / Jason #1) hails from Pittsburgh, Pennsylvania and is a M.F.A. graduate of the Juilliard Drama Program's group 48. Darryl (or DJ) was recently seen onstage at Shakespeare in the Park in Coriolanus. Prior to Juilliard, DJ spent his undergraduate years at Temple University, earning a B.A. in Theater Studies. Beyond acting Darryl dabbles in both fashion and music production. He is one of the founding members and producers of HomeBase, a collective of 50 black artists from NYU and Juilliard, dedicated to artistic creation, mentorship, and training of young artists. He also spent two summers in Botswana, teaching acting and directing, to both students and the surrounding community.

SAMUEL H. LEVINE (Young Man 1 / Adam / Leo). Originated the role of Adam/Leo in The Inheritance at The Noel Coward Theater in London’s West End and London’s Young Vic. Other theater includes Kill Floor at LTC3 for director Lila Neugebauer. In film he recently filmed the feature A Soldier’s Story opposite Jennifer Lawrence. Earlier this year he shot the lead in Eric Steel’s independent feature Minyan. On television he has been seen in CBS’s “Instinct”, “Bull” and “Elementary”.

LOIS SMITH (Margaret) appeared last season onstage in NYC in I Was Most Alive with You at Playwrights Horizons, in Peace for Mary Frances at New Group, and in the films Ladybird and Marjorie Prime, which was adapted from the play she performed at Playwrights Horizons. Some earlier favorite NYC plays include The Young and Beautiful (long ago), The Grapes of Wrath, Buried Child, The Trip to Bountiful (at Signature Theater). Awards include two Obie Awards, two Tony nominations, NY Critics, Drama Desk, Lucile Lortel, Outer Critics. Later this year she will appear in two films: Wes Anderson’s The French Dispatch and Alan Ball’s Uncle Frank.

ARTURO LUÍS SORIA (Young Man 8 / Jason #2) is a recent graduate from the acting program at Yale School of Drama where, in addition to performing, he also produced two of his own plays at the Yale Cabaret. His solo show Ni Mi Madre has been featured at festivals in Chicago, a one-night only event at Barrow Street Theater, Yale Cabaret, and the inaugural year of Ken Davenport's Rave Theater Festival. In 2015, it received the Luso-American Scholarship at the DisQuiet International Literary Program in Lisbon, Portugal. Hilton Als of The New Yorker likened Arturo to “a young Al Pacino” for his portrayal of the fast-talking-sassy- Puerto-Rican-snap-queen, Tano, in the World Premiere of Hit the Wall by Ike Holter at Steppenwolf and then off-Broadway at Barrow Street Theatre. Arturo can also be seen recurring on Season 2 of the Netflix series “Insatiable”. He received his BFA in acting from The Theatre School at DePaul University. www.arturoluissoria.com