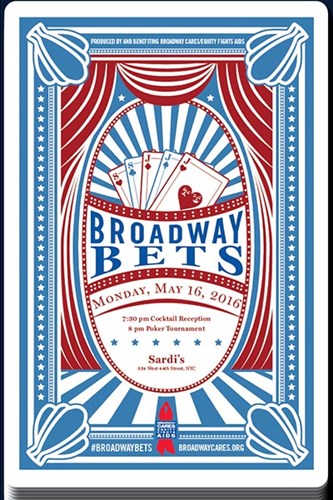 Get your poker face ready and double down at Broadway Bets, Broadway’s official poker tournament, which returns for a rolicking second edition this spring.

Produced by and benefiting Broadway Cares, the event gives the theatre community an opportunity to play in a friendly Texas Hold ’em tournament and go “all in” for an important cause. Facing off against each other, industry insiders and theatre fans will compete to be the last player standing and Broadway Bets champion. Prizes will be awarded to players at the final table.

Whether you're a first-time player or a poker ace, everybody's welcome and anyone can win.

Broadway Bets will again take over the famed Sardi's restaurant in the heart of New York's theatre district on Monday, May 16. Doors open for cocktails at 7:30 pm; tournament play begins at 8 pm.

The event is co-chaired by Lauren Reid, CEO of the Theater Division at Key Brand Entertainment, and Al Nocciolino, president & CEO of NAC Entertainment Ltd. Founding co-chairs are Paul Libin, executive vice president of Jujamcyn Theaters and BC/EFA Board of Trustees president, and Robert E. Wankel, president and co-CEO of The Shubert Organization and longtime BC/EFA trustee. Micah Hollingworth of Jujamcyn Theaters, Mark Shacket of Foresight Theatrical and Brett Sirota of The Road Company serve as the tournament directors.

For those not quite ready to go “all in,” Broadway Bets guest passes will be available to observe the poker table action. Guests also will be able to try their luck at other casino games with an opportunity to win prizes. All prizes will be announced this spring.