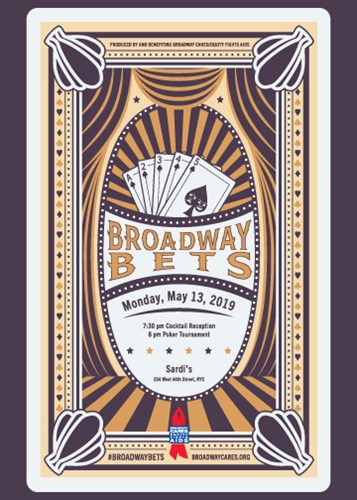 Fun and philanthropy are in the cards when Broadway Bets, Broadway’s official poker tournament, shuffles up and deals on Monday, May 13, 2019. The event is produced by and benefits Broadway Cares/Equity Fights AIDS.

Broadway stars, industry insiders and theatre fans will raise the stakes at the Texas Hold ’em tournament at the New York City theatre district’s beloved Sardi’s restaurant (234 West 44th Street). Newcomers and aces alike will have the chance to go “all in” and win the coveted title of Broadway Bets (#BroadwayBets) champion. Prizes will be awarded to all players who reach the final table.

Cocktails start at 7:30 pm; the tournament begins at 8 pm. All ticketing levels include hors d'oeuvres and an open bar. Tickets and table sponsorship information are available at broadwaycares.org.

Micah Hollingworth of BROADWai, Mark Shacket of Foresight Theatrical and Brett Sirota of The Road Company will return as tournament directors.

For those who haven’t quite mastered their poker face, guest passes offer a chance to observe the poker table action and play other casino games with an opportunity to win prizes.

Broadway Cares/Equity Fights AIDS is one of the nation’s leading industry-based, nonprofit AIDS fundraising and grant-making organizations. By drawing upon the talents, resources, and generosity of the American theatre community, since 1988 Broadway Cares/Equity Fights AIDS has raised more than $300 million for essential services for people with HIV/AIDS and other critical illnesses across the United States.

Broadway Cares/Equity Fights AIDS is the major supporter of the social service programs at The Actors Fund, including the HIV/AIDS Initiative, the Phyllis Newman Women’s Health Initiative and the Samuel J. Friedman Health Center for the Performing Arts. Broadway Cares also awards annual grants to more than 450 AIDS and family service organizations in all 50 states.