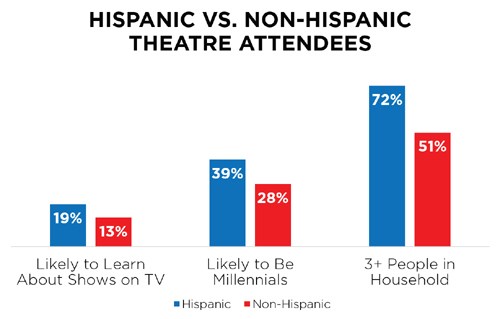 How important is the Hispanic audience to Broadway? According to our friends at Univision Communications, more and more every year.

In a report provided to Shubert and the Broadway League, Univision stated that Hispanics (Spanish-dominant or bilingual) spent $49.6 billion on entertainment in 2017, plus $89 billion on food and alcoholic beverages away from home. And the IHS Global Insight Hispanic Market Monitor anticipates 40% growth in consumer entertainment expenditures from this segment of the population.

All of this begs the question, are we doing enough on Broadway to appeal to the Hispanic audience?

Hamilton and John Leguizamo aside, there’s not much Hispanic representation on our stages. And still Hispanic audiences are going to see live entertainment in huge numbers. It’s estimated that 2.8 million Hispanics have attended a live event in the past year—a 1% increase over the prior year.

In addition to these stats, Univision provided more insight into this growing audience. First of all, they’re 36% more likely to learn about live events from commercials—good news for Univision. They tend to live in larger households; 72% live with 3+ people in the home (vs. 51% of non-Hispanics).

And here’s probably the best news: Hispanic theatregoers tend to skew younger. 39% of Hispanic theatre attendees are between the ages of 18 and 34. So if we’re serious about building our audience, that’s probably a good place to start.