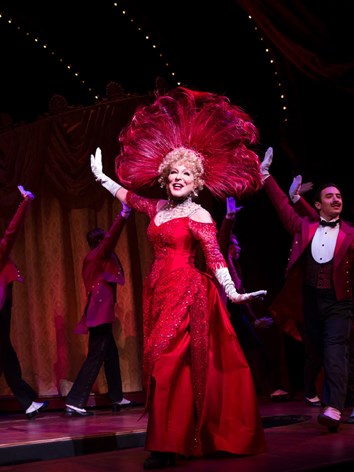 As it celebrates its one year anniversary on Broadway today, April 20, 2018, producer Scott Rudin announced that Bette Midler, who received unanimous raves and every Broadway acting honor, including the 2017 Tony Award for Best Actress in a Musical for her “perfect, once-in-a-lifetime Dolly” (New York Magazine), will return to the title role in the Tony Award-winning Best Musical Revival of Hello, Dolly! on Tuesday, July 17, for a strictly limited six-week-only engagement. Tickets for Ms. Midler’s return go on sale Saturday, April 28 at 10:00 AM ET and can be purchased online at HelloDollyOnBroadway.com, via Telecharge.com or at 212 239 6200, or in person at the Shubert Theatre box office (225 West 44th Street).

The production will end its historic Broadway run on Saturday, August 25, 2018.

In a statement, Ms. Midler said, “I am delighted to return to the scene of one of the greatest experiences of my life, and I know the brilliant Bernadette Peters enjoyed her turn as much as I did. Dolly Levi is one of the most joyful characters in Broadway history, and Bernadette and I were lucky to to be able to step into her glorious shoes.”

Ms. Peters said, “I am forever grateful to Bette for suggesting I step into the role of Dolly Levi. She was right. We both agree it is an amazing, joyful journey for us and the audience. And now I will hand the red dress back to my friend, the magnificent Bette Midler.”

Returning to their roles alongside Ms. Midler will be Tony Award winner David Hyde Pierce, who received Tony, Drama Desk, and Outer Critics Circle Award nominations for his performance as Horace Vandergelder, and Gavin Creel (returning to the show Tuesday, May 8), who received a 2017 Tony Award for Best Featured Actor in a Musical for his performance as Cornelius Hackl, and was cheered by Ben Brantley of The New York Times as “a marvel.”

David Hyde Pierce added, “Bette Midler is a crazy woman and I can’t wait to get back on stage with her.”

And Victor Garber said, “Being in this production of Hello, Dolly! with the incomparable Bernadette Peters, has been a career highlight for me, a joy and privilege 8 times a week.”