Ben Platt & Micaela Diamond to Star in PARADE on Broadway 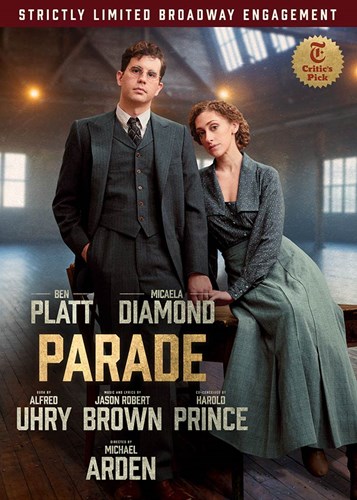 “THIS IS NOT OVER YET”

TO REPRISE THEIR PERFORMANCES IN

The production will play Broadway’s Bernard B. Jacobs Theatre (242 West 45th Street) with previews starting Tuesday, February 21 ahead of a Thursday, March 16 official opening night. This strictly limited engagement will play through Sunday, August 6 only.

Alfred Uhry and Jason Robert Brown said, “Twenty-five years ago, we were honored to bring the story of Leo Frank to the musical stage, guided by our visionary director, Hal Prince. It was an extraordinary gift to watch a whole new audience connect with Parade at City Center under the thrilling direction of a new visionary: Michael Arden. We couldn’t be more grateful that this production is now moving to Broadway, where even more people will get to see Ben Platt and Micaela Diamond deliver phenomenal performances and lead this large and gifted cast.”

Director Michael Arden said, “I am delighted that Alfred Uhry and Jason Robert Brown’s musical will be seen by Broadway audiences again after our brief run last fall. Parade has been a seminal piece of theater for me as an artist since it premiered 25 years ago, and to be collaborating with this incredible group of producers, designers, and artists led by the brilliant Ben Platt and Micaela Diamond is truly a dream come true. The story of Leo Frank is more important than ever to re-examine, and it is my hope that audiences are both inspired and activated to reflect on both the past failure and the enduring promise of the complicated tapestry we call America.”

In a joint statement, the producers of Parade said, “Jason Robert Brown’s and Alfred Uhry’s masterpiece, Parade, is one of the most beloved musicals of the past 25 years. Whenever you mention the show to a theater fan, they light up talking about the first time they saw a production or heard a recording. At City Center, Michael Arden mounted a magnificent production with incandescent performances from Ben Platt and Micaela Diamond that had audiences enraptured. We are overjoyed that we can bring this to Broadway so more people can experience Parade anew.”

When it played its instantaneously sold-out run at New York City Center, it was heralded by critics for its stellar performances, glorious score, incisive book, and impassioned direction. Juan A. Ramirez in the New York Times said, “This revival, filled with deft flourishes by director Michael Arden, recalls an era of big casts, big stories, and big talent – a time when musicals actually felt like events. Ben Platt and Micaela Diamond are fearless performers, and their duet ‘This Is Not Over Yet’ is a powerhouse for the ages. Their commanding vocals are matched by a confident production that revives the best of the original while pointing at the possibility of growth and hope.”

Leo and Lucille Frank (Ben Platt and Micaela Diamond) are a newlywed Jewish couple struggling to make a life in the old red hills of Georgia. When Leo is accused of an unspeakable crime, it propels them into an unimaginable test of faith, humanity, justice, and devotion. Riveting and gloriously hopeful, Parade reminds us that to love, we must truly see one another.

Additional casting and other news about Parade will be announced in the coming weeks.

Tony, Grammy, and Emmy Award winner Ben Platt (Leo Frank) can recently be seen starring in the Amazon film, The People We Hate at The Wedding alongside Allison Janney and Kristen Bell. He also recently wrapped his multi-city Reverie Tour which included stops at Madison Square Garden and the Hollywood Bowl. Platt also made his highly anticipated return to the New York stage as Leo Frank in Parade at the City Center.

Most recently, Ben wrapped production on the film Theater Camp which is co-written by Platt, Molly Gordon, Noah Galvin, and Nick Lieberman inspired by their popular 2020 short film by the same name. Platt, Gordon, and Galvin will all star in it as well directed by Gordan and Lieberman.

Last year, Platt starred in the Universal film adaption of Dear Evan Hansen where he reprised his Tony Award-winning role alongside Julianne Moore and Amy Adams. Ben can also be seen in the highly popular Netflix series by Ryan Murphy, “The Politician.” Ben stars and serves as the executive producer on the series – his performance in Season 1 earned him a Golden Globe nomination for Best Lead Actor in a Comedy Series and the show received a nomination for Best Comedy. Additionally, it was announced that Ben began filming alongside Beanie Feldstein, Merrily We Roll Along which will be shot over a 20-year period, directed by Richard Linklater.

Ben released his acclaimed sophomore album with Atlantic Records called Reverie on August 13, 2021 including hits “Happy To Be Sad” and “Imagine.” This marks the first new music from Platt since 2020’s Finneas-produced single “So Will I.” Ben also released a solo concert Netflix special “Ben Platt: Live from Radio City Hall” along with a deluxe version of his album, Sing To Me Instead and his hit single “Grow As We Go” recently crossed the threshold of Gold Status.

Multi-faceted singer/songwriter, Platt released his critically acclaimed debut album, Sing To Me Instead along with a single not on the album called, “The Rain,” which he debuted at the 2019 U.S. Open. No stranger to the big screen, Ben has starred in Universal Pictures’ smash hits Pitch Perfect and Pitch Perfect 2. He has also appeared in Ricki And The Flash alongside Meryl Streep and in Billy Lynn’s Long Halftime Walk, Run This Town, Broken Diamonds, as well as guest starred in the “Will & Grace” reboot for NBC.

Micaela Diamond (Lucille Frank) made her Broadway debut as ‘Babe’ – the youngest Cher – in The Cher Show, a role she auditioned for just weeks after graduating high school. She recently appeared in Parade at New York City Center, The Unofficial Bridgerton Musical at the Kennedy Center, Williamstown Theatre Festival’s production Row, and Ethan Coen’s A Play Is A Poem in Los Angeles. She made her television debut in NBC’s “Jesus Christ Superstar Live in Concert,” appearing in the ensemble and understudying Sara Bareilles. Additional television and film credits include “The Gilded Age;” Tick, Tick… Boom!; and “Up Here” on Hulu. @micaela_diamond.

Michael Arden (Director) is a two-time Tony nominated director for his Broadway revivals of Once One This Island, and Deaf West Theatre’s production of Spring Awakening. His new production of Charles Dickens’ A Christmas Carol starring Jefferson Mays recently played the Nederlander Theatre. Other theatre credits include: Maybe Happy Ending at the Alliance Theatre, Joseph and the Amazing Technicolor Dreamcoat at Lincoln Center, American Dream Study and ALIEN/NATION with his theatre company The Forest of Arden, at the Williamstown Theatre Festival, Annie at the Hollywood Bowl, and The Pride and Merrily We Roll Along at the Wallis Annenberg Center in Los Angeles. Arden has been named on Variety’s Broadway Impact List and is the winner of an NAACP Award for Best Direction of his revival of Merrily We Roll Along. In addition to directing theater in America and around the globe, he regularly directs “The Connors” on ABC, and has appeared in numerous features and television shows, most notable “Grey’s Anatomy,” Bride Wars, Anger Management, Source Code, and “The Marvelous Mrs. Maisel.” On stage, Arden has appeared on Broadway in Big River; The Times, They Are A-Changin’; and King Lear; among others. Arden is a Presidential Scholar in the Arts and alumni of the Interlochen Arts Academy and the Juilliard School. Michael is so very grateful to the late great titan of theatre; Hal Price, to Alfred Uhry for entrusting him with his words, and to Jason Robert Brown for replying to a somewhat embarrassing fan letter a sixteen-year-old Michael wrote to him in back in 1999. Dreams do come true!

Alfred Uhry (Book) is distinguished as the only American playwrights to have won a Pulitzer Prize, an Academy Award, and two Tony Awards. A 1958 graduate of Brown University, he began his professional career as a lyric writer under contract to the late Frank Loesser. He made his Broadway debut in 1968 with Here’s Where I Belong, which ran for one night. He had better luck with The Robber Bridegroom in 1976, which won him his first Tony nomination. He followed that with five recreated musicals at the Goodspeed Opera House in East Haddam, Connecticut. His first play was Driving Miss Daisy, which began life at the 74-seat upstairs theatre at Playwrights Horizons in 1987 and went on to run for three years and won the Pulitzer Prize in 1988. The film version, starring Morgan Freeman and Jessica Tandy, won the Academy Award for Best Picture of 1989 and gained Uhry his own Oscar for Best Screenplay. His next two Broadway outings won him Tony Awards: The Last Night of Ballyhoo (Best Play of 1997) and Parade (Best Book of a Musical 1999). In 2014, he was inducted into both the Theatre Hall of Fame and the Georgia Writers Hall of Fame.

Jason Robert Brown (Music & Lyrics) has written the scores for some of the most influential musicals of the past thirty years, beginning with Songs for a New World (1995), and continuing with Parade (Tony Award for Best Score, 1999), The Last Five Years (Drama Desk Awards for Best Music and Lyrics, 2002), 13 (2008), The Bridges of Madison County (Tony Award for Best Score and Best Orchestrations, 2014), Honeymoon In Vegas (2015), and last season’s Mr. Saturday Night (lyrics by Amanda Green). Both The Last Five Years and 13 have been adapted into films. Jason tours the world as a singer and pianist, and his songs, including “Hope,” “Someone To Fall Back On,” and “All Things In Time,” have been recorded by hundreds of artists including Ariana Grande, Shoshana Bean, Betty Buckley, Jennifer Nettles, Brandi Carlile, Billy Porter, and Audra McDonald. His latest musical, The Connector, directed by his longtime collaborator Daisy Prince, opens Off-Broadway next year.

Harold Prince (Co-Conceived and Original Broadway Director) directed the original productions of She Loves Me, It’s a Bird…Superman, Cabaret, Zorba, Company, Follies, A Little Night Music, Pacific Overtures, On the Twentieth Century, Sweeney Todd, Evita, Merrily We Roll Along, The Phantom of the Opera, Kiss of the Spider Woman, Parade, and LoveMusik. He has also directed acclaimed revivals of Candide and Show Boat. Before becoming a director, Prince produced the original productions of The Pajama Game, Damn Yankees, New Girl in Town, West Side Story, Fiorello!, Tenderloin, Flora the Red Menace, A Funny Thing Happened On the Way to the Forum, and Fiddler on the Roof. Among the plays he has directed are Hollywood Arms, The Visit, The Great God Brown, End of the World, Play Memory, and his own play, Grandchild of Kings. His opera productions have been seen at Lyric Opera of Chicago, the Metropolitan Opera, San Francisco Opera, Houston Grand Opera, Dallas Opera, Vienna Staatsoper, and the Theater Colon in Buenos Aires. His most recent version of Candide was seen at New York City Opera in January 2017. Prince of Broadway, a musical compendium of Prince’s entire career, opened on Broadway in August 2017. Prince was a trustee for the New York Public Library and instrumental in developing the Theatre On Film and Tape collection for the Library for the Performing Arts at Lincoln Center. He previously served on the National Council on the Arts for the NEA. Prince was an Officer in the Ordre des Arts et des Lettres, given to him by the French government in 2008. He was the recipient of 21 Tony Awards, a Kennedy Center Honor, and the Eugene O’Neill Theatre Center’s Monte Cristo Award. Prince was inducted into the Lincoln Center Hall of Fame as a part of their inaugural class and received a National Medal of the Arts from President Clinton for a career in which he “changed the nature of the American musical.”