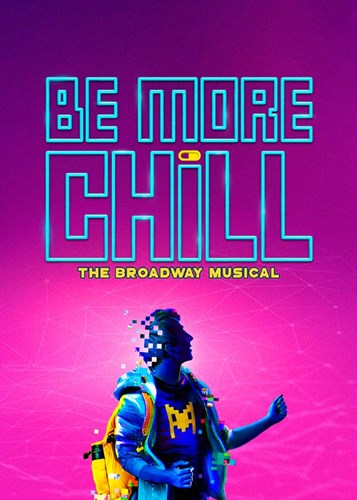 "We are absolutely thrilled that the entire New York premiere company will be making the journey with us to Broadway," says Gerald Goehring, lead producer of Be More Chill." This company has collaborated to bring Joe Iconis and Joe Tracz's beautiful and universal musical to life off-Broadway this summer and we could not have been more thrilled with the outpouring of love we received from our fans around the world. The entire company cannot wait to bring the production to an even greater audience at The Lyceum in the new year."

The initial New York premiere production of Be More Chill played a sold-out limited engagement off-Broadway this summer. A hit with audiences and critics alike, The New York Times writes "Be More Chill is one of the most popular musicals in America." The Wall Street Journal raves "you don't have to be a millennial to revel in the spunky charms of Be More Chill. See it now if you can wrangle a ticket, because it's going to hit big - deservedly so." The New Yorker says "if you fed Dear Evan Hansen and Mean Girls to the Little Shop of Horrors plant, with a few Xbox games as a digestif, Be More Chill is probably what you would get. ...Dynamic, jouncy, and as infectious as malware." The Hollywood Reporter says "uproarious laughter ...enjoyable, catchy, up-tempo numbers, so winning that it's hard to resist," and Vox calls Be More Chill "a sensation. ... wildly adored  ...universal. ... The audience was screaming at every song." Variety writes "It's one thing to be told that Be More Chill is a viral hit on the internet. It's quite another to experience the hype live and in the room, where the audience explodes like it's at a rock concert. ...People have come from all around the country, if not all around the world to see it."

Even before arriving in New York, Be More Chill's inspired a dedicated community of fans around the world. Before opening, this summer's New York premiere engagement sold out its entire limited run with tickets purchased by fans from all 50 states (plus Washington D.C.), and from 18 countries on five continents.  Be More Chill had already amassed an unprecedented following across various online platforms, with millions of fans from Brazil to Japan to New Jersey sharing fan art, streaming the album (over 200 million streams to date), and talking about the show. Tumblr ranks Be More Chill as the #2 most talked-about musical on their platform, following Hamilton.  Shortly after the announcement of  Be More Chill's Broadway run, it was announced that Shawn Levy's 21 Laps("Stranger Things," Arrival, Night at the Museum) and Greg Berlanti Productions (Love Simon, "Dawson's Creek," "Brothers & Sisters") would bring an adaptation of the Joe Iconis and Joe Tracz musical to the screen.

Following up on the success of The 2015 Two River Theater cast recording, available from Ghostlight Records, a special edition Be More Chill original cast recording on vinyl is now available. The 2-disc package features new illustrative designs, green and red colored discs, and a 16-page, 12 x 12 booklet with lyrics, production photos and a new liner note from Joe Iconis.

Performance rights for Be More Chill are licensed by R&H Theatricals.