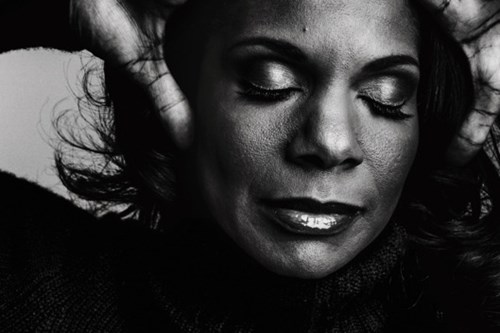 Through heavy walls and a warren of hallways, before I’m even buzzed into the studio, I recognize Audra McDonald’s voice. She’s just doing vocalise: singing scales on the syllables eh and oo, nine notes up and eight back down, then again a semitone higher, over and over, up through her range. But it might as well be Puccini. Even performing a rote exercise, she’s an emotion machine.

Inside, her teacher of 20 years, Arthur Levy, is listening attentively, as still as an ornithologist. He stares at her, observing the details of her breathing, which are obvious even through the chunky oatmeal-colored shawl-sweater she’s wearing this raw February night. McDonald, who calls herself a tomboy, is in jeans and boots, her hair piled high in two topiary balls. With her slight defensive crouch and wide stance, she looks like a shot-putter about to let something heavy fly. But she quails as she moves from her plangent lower range into the stratosphere. Something feels “stuck in the middle,” she says. Levy tells her to fling her arms up in the air, like the Flying Nun, as she reaches the fifth note of each scale. This looks absurd, but when she does it, the studio, a 13-by-13 shoe box near Carnegie Hall, can hardly contain the result. The walls seem to flap. I expect Levy’s scented candles to gutter, the humidifier and space heater to short. It’s the most exciting thing I’ve ever heard.