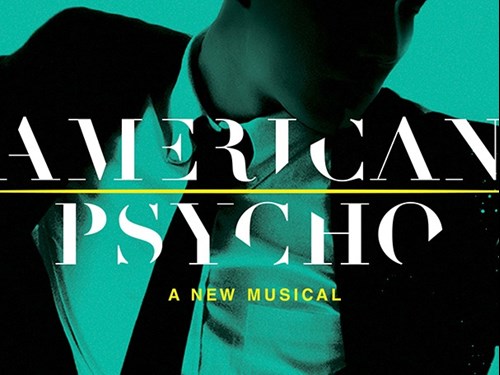 TO BE STAGED BY RUPERT GOOLD

(New York, NY) China Doll will be followed by an AMERICAN PSYCHO . Based on the novel by Bret Easton Ellis, AMERICAN PSYCHO the musical will start previews Thursday, March 24th, 2016 at The Gerald Schoenfeld Theater at 236 West 45th Street. The production will star BENJAMIN WALKER (Cat on a Hot Tin Roof, Bloody Bloody Andrew Jackson) as Patrick Bateman.

AMERICAN PSYCHO has music and lyrics by Tony Award-winner Duncan Sheik, making this his first new show to come to Broadway since his Tony Award-winning Spring Awakening. The show has a book by Roberto Aguirre-Sacasa (Spiderman: Turn off the Dark, "Glee") and is based on the novel by Bret Easton Ellis. Rupert Goold (King Charles III, Macbeth) directs and choreography is by Lynne Page (La Cage Aux Folles, A Little Night Music).

"I've been a huge fan of Ben's work on stage and screen and am really looking forward to working with him on American Psycho," said Rupert Goold. "He is an enormous talent and I think audiences will be utterly seduced by his dangerous charisma and extraordinary stage presence. He'll make a killer Patrick Bateman."

"Ever since Ben ignited the musical theatre with his startling and superb performance in Bloody, Bloody Andrew Jackson, I had hoped to work with him again," said Jeffrey Richards. "When Jerry Frankel and I were offered the opportunity to join David Johnson and Jesse Singer of Act 4 Entertainment in presenting American Psycho, my first thought was that the most charismatic and sexy actor for the role of Patrick Bateman would be…Benjamin Walker. The gift of collaborative partners is that we were all in agreement…and so for that matter, as I found out, was the entire creative team."

Living the high life in 1980s Manhattan, Patrick Bateman has it all - looks, money, style and status. He and his entourage buy the most expensive designer clothes, eat at the most exclusive restaurants and party at the hottest clubs. But privately, Patrick indulges in another kind of transgression. And people - including those closest to him - keep disappearing.

BENJAMIN WALKER (Patrick Bateman) can next be seen opposite Pierce Brosnan and Kaya Scodelario in Paramount's The Moon and The Sun, based on the popular young adult novel of the same name. Additionally, Ben just completed shooting the male lead in the independent feature from New Regency and Locomotive Media Look Away opposite Aidan Turner, Matthew Broderick, Chloe Sevigny and newcomer Shannon Tarbet.

This December, he stars alongside Chris Hemsworth in Ron Howard's adaptation of In The Heart of The Sea. The film is based on the 1820 event, in which a sperm whale preys upon a whaling ship, stranding its crew at sea for 90 days. Herman Melville's Moby Dick was loosely based on this story.

Benjamin will also be seen as the male lead in The Choice, an adaptation of the successful novel of the same name by Nicholas Sparks. The Choice is a romantic drama about Travis Parker (Walker) who lives in a small coastal town and falls in love on his first meeting with Gabby Holland, who moves next door. The film will be released in February 2016 by Lions Gate.

Some of his other previous film credits include appearing in the Clint Eastwood directed Flags Of Our Fathers, the Bill Condon directed Kinsey, the title role in Timur Bekmambetov's Abraham Lincoln Vampire Hunter, produced by Tim Burton, and the Emmy-nominated HBO film Muhammed Ali's Greatest Fight directed by Stephen Frears.

Benjamin is perhaps best known from his critically raved about performance on Broadway as the title character in Bloody Bloody Andrew Jackson. Benjamin's extensive theater credits include: the Broadway revival of Cat On A Hot Tin Roof alongside Scarlett Johannson and directed by Rob Ashford, Roundabout Theatre Company's Les Liaisons Dangereuses on Broadway directed by Rufus Norris and co-starring Laura Linney, and Inherit The Wind on Broadway opposite Brian Dennehy and Christopher Plummer, directed by Doug Hughes. He also co-starred in Arrangements Off-Broadway at the Atlantic Theatre Company, directed by Christian Parker. Raised in Cartersville, Georgia, Benjamin is a graduate of the prestigious Juilliard School in New York and the Interlochen Arts Academy. He currently resides in New York where he produces and hosts a monthly comedy variety show called "Find the Funny" at Joe's Pub. He is represented by William Morris Endeavor and Inspire Entertainment.

DUNCAN SHEIK (Music & Lyrics) was awarded the 2007 Tony Awards for Best Orchestrations and Best Original Score, and the 2008 Grammy Award for Best Musical Show Album for Spring Awakening, which won a total of 8 Tony Awards including Best Musical. His other work for the stage includes Because of Winn Dixie (Arkansas Repertory Theater); The Nightingale (La Jolla Playhouse); Alice By Heart (London's National Theatre); Whisper House (Old Globe Theatre); Nero (Another Golden Rome) (Powerhouse Theatre); and The Caucasian Chalk Circle (Classic Stage Company). Film scores include The Cake Eaters; Little Spirit and Harvest. As a solo recording artist, Sheik's self-titled debut on Atlantic Records spent 52 weeks on the Billboard 200 and earned him a Grammy nomination for Best Male Vocal and was Certified Gold by the RIAA. Sheik's other albums include Humming; Phantom Moon; Daylight; White Limousine and Legerdemain.

ROBERTO AGUIRRE-SACASA (Book) is an award-winning playwright, screenwriter, comic book and television writer. He is the co-book writer of Spider-Man: Turn Off the Dark. His plays, including Abigail/1702 (New York Stage and Film/Cincinnati Playhouse in the Park/City Theatre, Pittsburgh); Doctor Cerberus (South Coast Repertory/LA Theatreworks, California); The Picture of Dorian Gray (Roundhouse Theatre, Maryland); King of Shadows (Working Theatre, New York); Good Boys and True (Steppenwolf Theatre, Chicago/Second Stage Theatre, New York); Based on a Totally True Story (Manhattan Theatre Club); The Mystery Plays (Second Stage Theatre/Yale Repertory Theatre); The Velvet Sky (Woolly Mammoth Theatre, Washington D.C.); The Muckle Man (City Theatre); Dark Matters (Rattlestick Playwrights Theatre, New York); Rough Magic (Hangar Theatre, New York); The Weird (Dad's Garage Theatre, Atlanta); It's a Bird, It's a Plane, It's SUPERMAN (Dallas Theatre Center). He is the Chief Creative Officer for Archie Comics, for which he writes the horror hit Afterlife with Archie and Chilling Adventures of Sabrina. Additionally, he has written for the HBO series "Big Love," the Fox hit "Glee," and HBO's "Looking." His film work includes Carrie and The Town that Dreaded Sundown, both for MGM. Roberto is a graduate of the Yale School of Drama. He was the recipient of the 2009 Horizon Award from the National Hispanic Foundation for the Arts.

BRET EASTON ELLIS (Novelist). Bret's original novel American Psycho was published in 1991. He has written seven novels including Less Than Zero, The Rules of Attraction, Glamorama, and Lunar Park. His works have been translated into twenty-seven languages. American Psycho, Less Than Zero, The Rules of Attraction, and The Informers, a collection of short stories, have all been made into films. This is the first time any of his novels have been adapted for the stage.

Here is what some of the critics said about London's Almeida and Headlong production:


* * * * *
"Funny and superbly staged… the most stylish production of the year."
-Sunday Express

* * * * *
"This skillful interpretation is brilliant and absorbing."
-Evening Standard

* * * * *
"Pure, decadent pleasure… will delight even those who think that they don't like musicals."
-Times

* * * * *
"This stunning high-concept musical…is one of the most original in recent years: creepy, beautiful, reverberative, hollow, sleek and disturbing."
-What's On Stage

* * * *
"Goold, Sheik and scriptwriter Roberto Aguirre-Sacasa have retooled American Psycho as a comedy for our time."
-Time Out

* * * *
"Confirms the mythic power of Ellis' story and leaves us all dangerously entertained."
-The Guardian