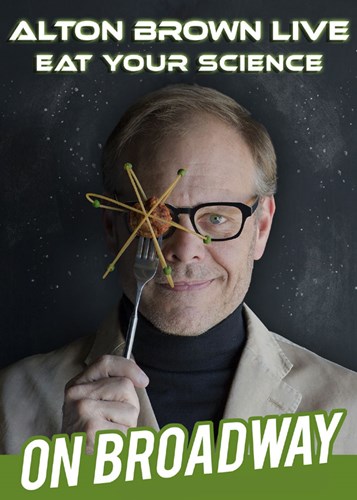 NEW YORK – July 18, 2016 – Television personality and author Alton Brown has announced “Alton Brown Live: Eat Your Science” will make its Broadway debut Thanksgiving week for eight performances at the Barrymore Theatre. Brown created a new form of entertainment – the live culinary variety show – with his “Edible Inevitable Tour,” which played in over 100 cities with more than 150,000 fans in attendance. The first leg of Eat Your Science sold 100,000 tickets in the 40 cities Brown visited.

Brown says fans in the Big Apple can expect a cornucopia of “all new everything including songs, new comedy, new puppets and bigger and better potentially dangerous food demonstrations. I can neither confirm nor deny that we've given the Broadway version of ‘Eat Your Science’ a distinctly Thanksgiving flavor, but wouldn't that be cool?" Critics and fans have raved about the interactive components of Brown’s shows. He promises “plenty of new therapy inducing opportunities during our audience participation segments. I don’t want to give too much away, but this time we’re going to play a little game.”

Brown has a knack for mixing together science, music and food into two hours of pure entertainment. “Plus, you’ll see things I’ve never been allowed to do on TV.”

Brown, author of the James Beard award winning “I’m Just Here for the Food” and New York Times bestselling sequence “Good Eats” is releasing his new cookbook through Ballantine Books (an imprint of Random House) on September 27, and it is available for preorder now. “Alton Brown: EveryDayCook”, or EDC as Brown calls it, is a collection of more than 100 personal recipes as well as a pinch of science and history. He has hosted numerous series including “Cutthroat Kitchen,” “Camp Cutthroat” and “Iron Chef America,” as well as created, produced and hosted the Peabody award winning series “Good Eats” for 13 years on Food Network. Good Eats can still be seen on the Cooking Channel and Netflix.

Information about Alton Brown or the Eat Your Science tour can be found on Facebook: /altonbrown; Twitter: @altonbrown; Instagram: @altonbrown; or use the tour hashtag #AltonBrownLive.

Those with an appetite for more Alton Brown can find additional show and ticketing information at www.altonbrownlive.com.

Alton Brown Live is produced by MagicSpace Entertainment. The company is headed by Lee D. Marshall, Joe Marsh, John Ballard, Steve Boulay and Bruce Granath and has been producing and presenting national tours, Broadway shows, concerts and museum exhibits worldwide for over 30 years. Consistently one of the top promoters in North America, MagicSpace Entertainment typically produces and presents more than 250 events in 75 cities per year.  They have offices in Park City and Salt Lake City, UT. www.magicspace.net